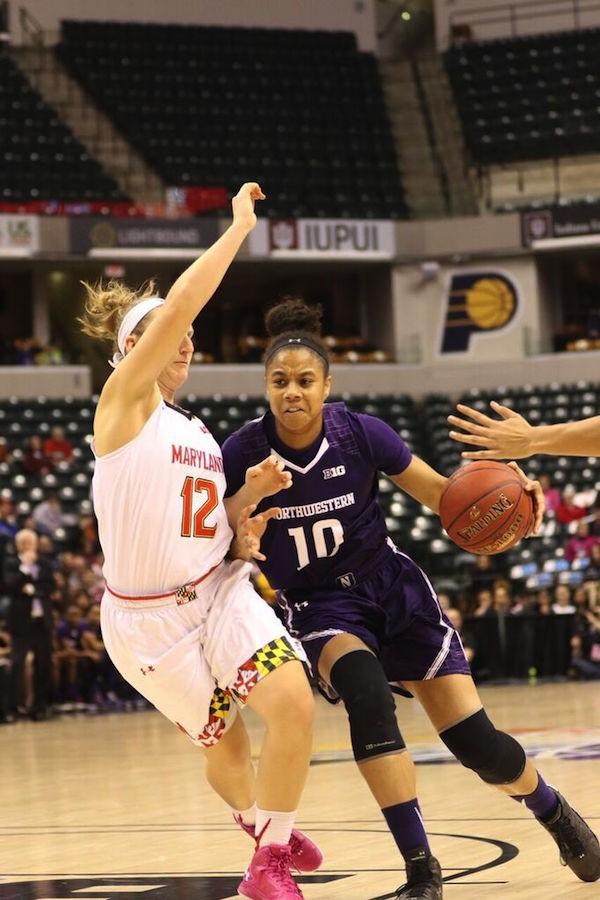 Nia Coffey drives towards the basket. The junior forward was one of only two Wildcats to score double-digits Saturday as she led all scorers with 31.

INDIANAPOLIS — On the fourth day, the Cinderella story ended.

Five Maryland players scored in double figures as the top-seeded Terrapins (29-3, 16-2 Big Ten) defeated No. 12 seed Northwestern (18-16, 4-14) 83-62 on Saturday at the Big Ten Tournament semifinals. The loss ends the Wildcats’ run in the tournament after upsets of No. 5 Minnesota on Thursday and No. 4 Indiana on Friday.

Playing four games in four straight days seemed to catch up with the Cats on Saturday. Junior forward Nia Coffey scored 31 points for the Cats, but no other NU player scored more than 10.

“I’m really proud of our team,” coach Joe McKeown said. “In the big picture, what we did this week … to win three games in three days, to play four games in four days, I’m just going to look at it as a great experience for our team.”

Playing without senior guard Maggie Lyon, out with a lower body injury for the fourth straight game, NU’s offense flowed almost exclusively through Coffey. The junior forward set the record for the most points in a single Big Ten Tournament with an even 100.

Coffey tallied the Cats’ first 10 points and had 16 at the half. Coffey also made 7 of the Cats’ 12 first half field goals.

Unlike in recent games, NU had only one productive scorer. The Cats had at least three double-figure scorers in each of their first three games in Indianapolis, yet Coffey did the bulk of the offensive work on Saturday.

“I always just want to keep an aggressive mindset and do what I can and take the opportunities that are given to me and just try to create for my team,” Coffey said

A third quarter Terrapins run was ultimately the Cats’ undoing. Maryland turned its 37-30 halftime lead into a 51-36 lead midway through the quarter, and NU never again brought the margin within single digits.

In its previous two games, NU led most of the way and rarely needed to make a late run.
On Saturday, however, the Cats led just once in the first quarter.

“Maryland is a good team, and I think they had a lot of experience in those situations,” junior guard Christen Inman said. “We made a punch for them, and then they hit us back, and we didn’t respond the way we should have.”

Junior guard Ashley Deary was among many NU players to struggle offensively. She went 0-of-14 from the field and finished with just 2 points. Deary missed layups, short-armed short jumpers and even airballed a shot near the basket.

Maryland’s offense, meanwhile, was clicking on all cylinders. The Terrapins shot 52.5 percent, and three players made the majority of their shots.

Saturday’s game played out much as the two regular season meetings. Maryland led throughout in both games, holding the Cats to under 40 percent shooting in each.

NU may continue postseason play in the WNIT if it receives an at-large bid. The 64-team field will be announced March 14.

Despite the loss, McKeown remained upbeat about his team’s performance this week.

“As a program now, we established ourselves,” he said. “We showed a lot of fight this week.”