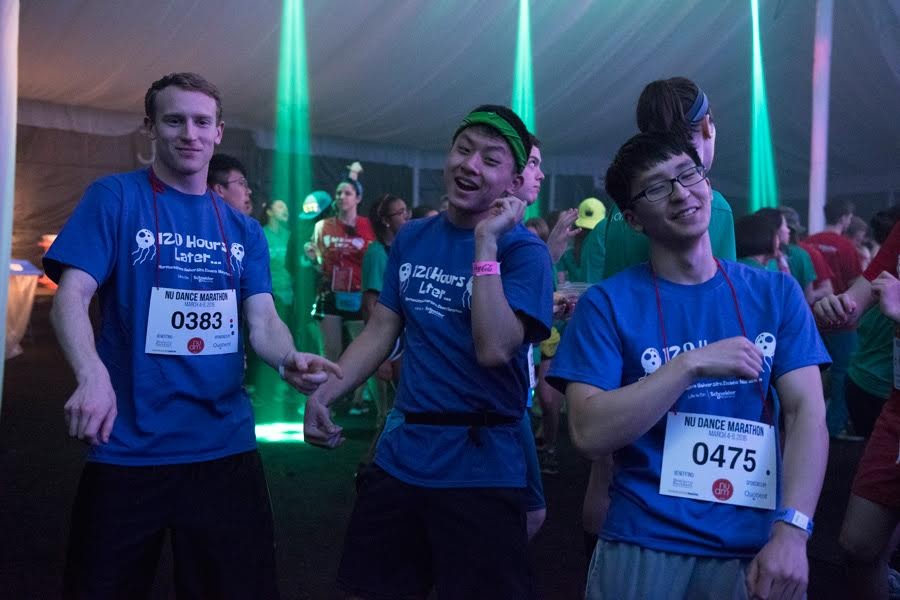 When Emily Halpern first signed up for Dance Marathon four years ago, she thought it was mandatory.

“Might as well get it over with my freshman year, and if I hate it, I never have to do it again,” the Weinberg senior said.

The 120-hour club consists of seniors who have danced each of their four years at NU. Some planned on dancing all four years while for others, like Halpern, it just happened. While dancing her freshman year, Halpern realized DM is more than a fun activity, she said, and saw the community that arises from working for a common cause.

“Once you do it once, you realize how incredible it is and that’s what fuels you to keep going,” Halpern said. “You realize how amazing of an effort it is, and I think it’s one of the only things on campus in which an entire community comes to surround one cause that’s bigger than all of us, and that’s what so powerful about DM.”

Several motivators push students to join the 120-hour club. For McCormick senior David Olodort, gaining different positive experiences each year motivated him to continue dancing through his time at NU.

Olodort first signed up with his fraternity, Pi Kappa Alpha, for Dance Marathon 2013. One of the emcees that year, Demetri Elias, was in his fraternity and encouraged him and his pledge class to participate. He knew from the beginning that he wanted to dance all four years, he said, and first appreciated the camaraderie with his fraternity-sorority team. Now he is a senior, and he values teaching new dancers on his team a love for DM and learning about the causes they work for.

“I don’t think it was ever about the title of 120-hour club,” Olodort said. “It’s not like something you’d put on your resume or care about at the end of the day. Every year it became a more and more reflective experience for me, and so that’s why I wanted to keep it to the end.”

Sharing their love of DM with new dancers has been a tradition Olodort and McCormick senior Jack McCartney will always remember fondly, McCartney said. Olodort and McCartney are co-leaders of their fraternity-sorority team with Kappa Kappa Gamma.

“It has been a really cool experience in mentorship, and I’m beginning to realize how much more important it’s been for me as I’ve gone through it over the years,” Olodort said. “Now that I’ve been able to bond with those freshmen and hopefully instill in them, not just a love for DM, but much more importantly, this idea of fundraising on the community level and doing it with your friends or your family — I think it’s really cool.”

The mix of spending quality time with friends and working toward a good cause is what encourages McCormick senior Jason Vignolo to dance every year. Though he fundraises for months before DM, hearing about DM’s impact from the beneficiaries is when it really hits home, Vignolo said.

“Someone from Blessings in a Backpack said she regularly has kids who are saying, ‘Because of these backpacks, I get to eat on weekends or I get to sleep at night because I’m not hungry,’” Vignolo said. “That’s obviously really nice to hear that you’re indirectly doing something like that.”

Olodort offered similar advice for new dancers. Though DM may have a reputation of being an unpleasant and grueling experience, he said that is often because people go in expecting a bad time.