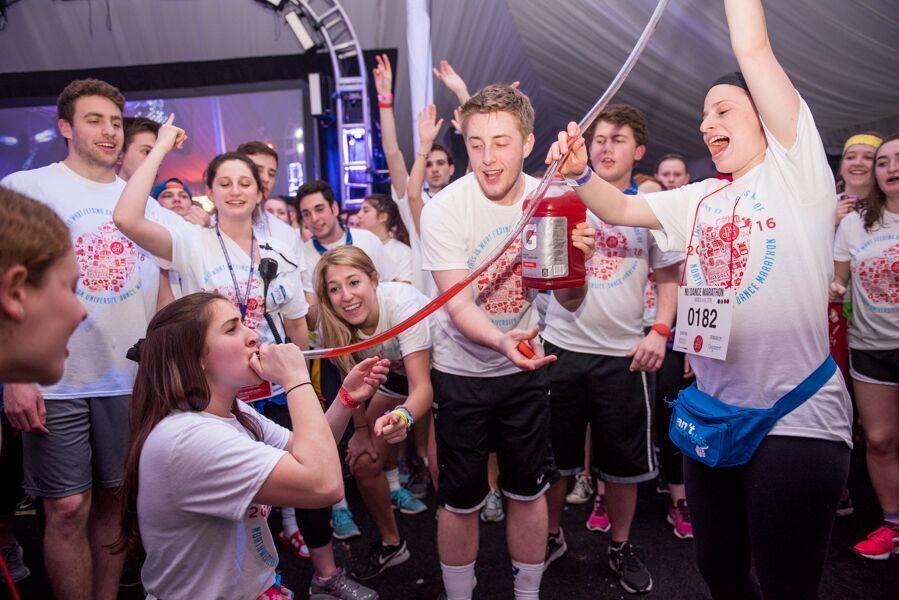 For DG/ZBT/AIO team, tradition blends old with the new

Two years ago, Jacob Greenberg said he remembered falling to the floor of the Dance Marathon tent in tears.

The then-Weinberg sophomore had found out his team, Zeta Beta Tau and Delta Gamma, raised $154,319.34 — the largest total a group has ever collected for the annual 30-hour philanthropy fundraiser.

“It’s chill-inducing,” he said. “It’s not all about breaking the record. … It’s everything you put into a year coming into fruition and coming into a solid figure.”

DM spokeswoman Kalli Koukounas, a Weinberg junior and a member of the team, was a freshman back then. The scene was mob-like in the best way, she said. She said she, too, was moved to tears.

“Everyone around you is crying,” she said. “Everything’s been building up and when you hear that number, the group heads just break down and you break down because it’s such an emotional release of a moment.”

The record-breaking moment was one year in multiple decades of DMs in which the ZBT and DG team took first place in fundraising, including this year’s total of $179,374.10. Partnered together for more than 40 years, the two Greek chapters have a deep-rooted history in participating — and overachieving — in DM. In fact, many dancers have said they could not imagine their experience with their fraternity or sorority without DM.

“I didn’t realize how much it shaped my college and DG experience until this year,” Weinberg senior Brianna Cohen said. “I live off-campus and our whole house is dancing. … We’re all in the 120-hour club which means that as freshmen who barely knew each other, we all decided to dance.”

Last DM, the duo became a trio, adding South Asian-interest fraternity Alpha Iota Omicron to the team to increase inclusivity at the event. Now in its second year, the union has seen AIO’s members quickly picking up traditions that ZBT and DG have established over the years. In total, there are 136 members on the team, said Communication sophomore and DG group head Haley Baker.

For Weinberg senior Emily Halpern, being in the changing room prior to the event felt like coming full circle. The DG members recently began a chant, “Let’s get a little bit rowdy, R-O-W-D-Y,” that gradually spikes in volume. Meanwhile, the group heads, all sophomores, gave pep talks as all the girls on the team huddled up.

DG group head Jamie Newman said going into her second year of DM as a leader is rewarding.

“As a 19-year-old, there’s not that many opportunities to have to make a huge impact,” the SESP sophomore said. “I’m able to raise over $100,000 for a cause and help these freshmen do this super scary thing and be part of something bigger than myself.”

Greenberg, now a senior and DM’s special events co-chair, remembers participating in the pushup tradition with ZBT as group head two years ago. The pushups each block — numbering the amount of hours left — were the moments he said as a DM executive board member that he missed most about dancing with his team.

Weinberg junior Shaan Somani, AIO’s group head, who participated in his first DM this weekend, said despite the smaller amount of his fraternity’s dancers — three people — he has always felt included by ZBT and DG.

“We have been piggybacking ZBT when they do the pushups,” he said. “It definitely makes you feel like, ‘Hey I’m part of the team, this is something we’re all working towards.”

McCormick sophomore Rafi Dodo, a ZBT group head, said he felt “deja vu” walking into the tent with the rest of his team on Friday.

“It’s my second time but there’s also a big feeling of, ‘This is something new,’ because I’m in a higher position and that all the work we’ve done is going to pay off and it’s going to compile into this one night,” he said.

Earlier this month, Greenberg also went into this year’s DM tent for the first time. Without the momentum, lights and other dancers surrounding him, he said the experience of seeing a bare tent was “humbling.” It was surreal for him on Friday to finally put on his dancing clothes one last time as an undergraduate student and watch dancers sign in.

“You feel so excited when people start talking about Dance Marathon and you can’t wait for it. That’s the benefit of being part of a group that really prioritizes Dance Marathon,” he said. “It’s sad because I know this is my last Dance Marathon, but it’s also symbolic of my end of college.”