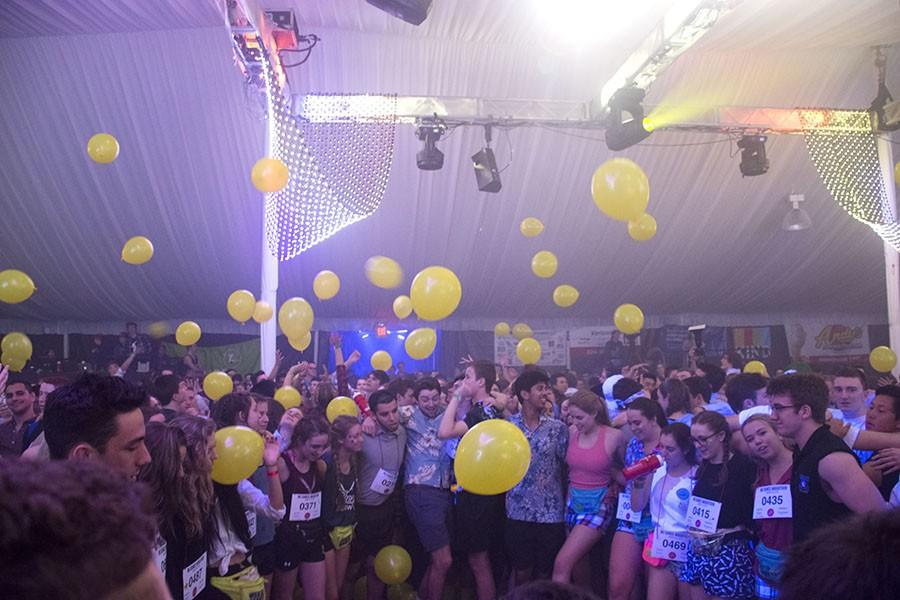 Dancers got their first exposure to the outdoors during Block 4 after 12 hours inside the tent.

Near the end of the block, dancers convened to run a lap around Norris University Center, getting a breath of fresh air before emerging back inside to stretch before Block 5, the end of first half of Dance Marathon.

“This is my second year dancing, and (the run) is refreshing every time,” Bienen and Weinberg sophomore Sebastian Botero said.

Block 4 opened with Battle of the DJs duo L&L, made up by Weinberg junior Patrick Quaggin-Smith and McCormick junior Nicolay Dahl. The pair played remixes of electronic dance music and top-40 songs for the first hour and ten minutes of the block.

Just after 5 a.m., the emcees took the stage to mark the end of L&L’s set. Students, joined by Quaggin-Smith and Dahl, began to chant “One more song!” but, to the frustration of dancers such as Blake Maier, the emcees carried on with scheduled programming.

“The DJs were great, and then … DM blew out all the hype in the room,” the Weinberg freshman said.

Following L&L’s set was a celebrity video featuring actor Jesse Eisenberg, who starred in “The Social Network” and “Zombieland.” In the short video, Eisenberg misidentified the primary beneficiary as Blessings in a Basket, prompting laughter from the crowd.

“I can’t believe you’re dancing for 30 hours,” Eisenberg said. “I usually spend 30 hours trying to avoid dancing for 15 seconds, so I think what you’re doing is not only exhausting but really commendable.”

Throngs of dancers, dressed in button-down shirts, ties and pajama bottoms in light of the block’s “Skype Interview” theme, said they began to feel the weight of exhaustion during Block 4.

Medill freshman Kathryn Karnaze said she was beginning to realize that DM “is more of a marathon than a dance.”

SESP junior Jacob Rosenblum, who said he had danced before in 2014, said the mission of Blessings in a Backpack was keeping him invested, even though he had “fantasized about escaping the tent.”

“(The beneficiary) is why I did it this year,” Rosenblum said. “When I saw who the beneficiary was, I had to do it because… they work in the Chicago area, they work to fight childhood hunger. It’s a social issue that humans can fix and should fix.”

At 6 a.m., the block’s final hour, Amy Kaufman from Community Partners for Affordable Housing, one of the nonprofits that secondary beneficiary Evanston Community Foundation assists, went onstage to speak to the organization’s mission of creating affordable housing units in the city.

Kaufman also expressed her gratitude to the dancers, several of whom had assisted CPAH in refurbishing an apartment building to create five new affordable housing units in Evanston.

“It’s so profoundly important what you are doing,” she said. “You guys are the future…. you are the ones who are going to be taking care of our communities — that’s what you’ve shown so far.”

Just after Kaufman’s speech, several DM executive board and committee members took the stage to begin a sequence to mark the sun rising. Yellow balloons were released from mesh nets hung from the ceiling as The Beatles’ “Here Comes the Sun” played through the room. Fundraising teams, committees and friends linked their arms around each other to form circles and sing along.

Asher Goldman, who serves on the dancer beneficiary relations committee, said the sunrise sequence had been a significant moment for him all four years that he’d participated in DM.

“In a lot of ways, it’s the one constant,” the McCormick senior said. “Every time that they do that same thing, it kind of brings you back to the other years and it kind of allows you to remember where you were at that point a year ago, two years ago.”

For the rest of our DM coverage, click here.