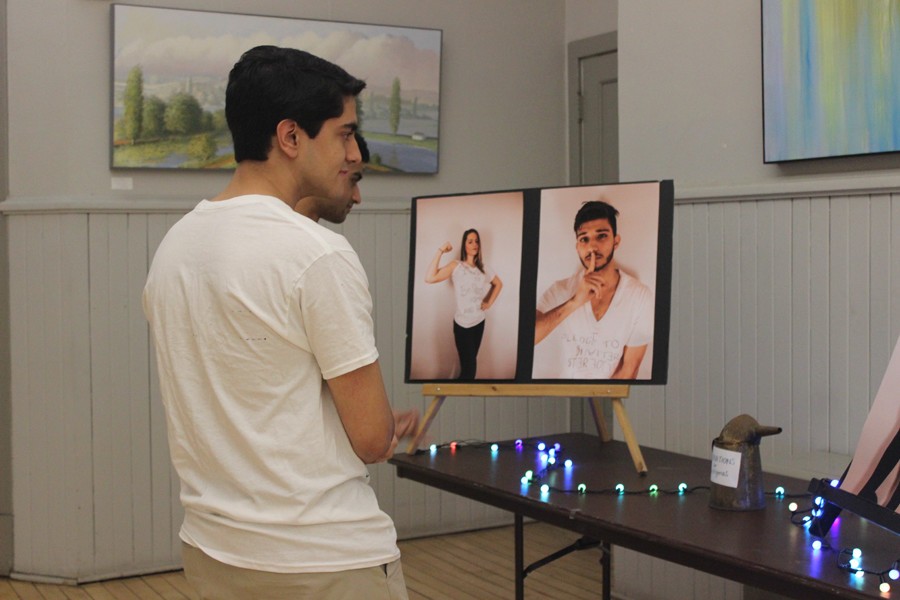 Students observe photography of Unity models displayed at a gallery night at the Noyes Cultural Arts Center. The event was held by Unity Charity Fashion Show and NU Active Minds to support the removal of negative mental health stigmas.

An electric guitar blares as people mingle and look at photos on the walls of the Noyes Cultural Arts Center gallery — some wearing T-shirts decorated with slogans such as “I pledge to be strong for myself and for others” and “I pledge to love not judge.”

The people donning the T-shirts are Unity Charity Fashion Show models, who partnered with NU Active Minds for a gallery night Wednesday to talk about the importance of eliminating negative stigmas around mental health.

The event was part of Stress Less Week, a week of activities hosted by NU Active Minds. It featured a gallery of photos of the models wearing these T-shirts, as well as musicians from Sheridan Road Records, two student speakers and a dialogue with the founder of NoStigmas, a Chicago-based global peer support network devoted to reducing stigmas around mental health.

Each model was asked to decorate a white t-shirt with a mental health-related slogan and the hashtag “#nostigmas” and then participate in a photoshoot to display during the event. Photographer and Weinberg senior Shiven Samant said he asked each of the models to act out the message on the shirt in the photos.

Halfway through the event, people gathered as the speakers began sharing their stories about experiences with mental illness and mental health.

The first speaker was Weinberg-Bienen senior Jacob Pope, who told the audience about his battle with depression. He emphasized the importance of creating an atmosphere of empathy and compassion surrounding mental illness. He said events like this are critical to helping create this environment at Northwestern.

“It’s a pet cause of mine that I really care about,” he told The Daily. “I really felt like sharing my story and maybe helping someone else.”

NoStigmas founder Jacob Moore also spoke at the event, but in a discussion format. After discussing his struggles with mental health in high school, he led a brainstorming session about ways people can reduce distance in their relationships and be intentional and genuine in the way they connect with people.

“This was just a really genuine beginning of starting conversations about mental health, which these events are always supposed to do,” Moss said. “I always forget how meaningful they end up being until I’m here.”

These type of events are important because they help remove negative stigmas related to seeking help, Pope said.

“You don’t make fun of a cancer patient because they had to go through chemotherapy, and in the exact same way, it’s not fair for us to ostracize people who have mental illnesses just because their illnesses don’t leave the same marks,” he said. “Groups like Active Minds are fighting that and that’s what today’s about, and it’s of such vital importance to people who are fighting this fight.”