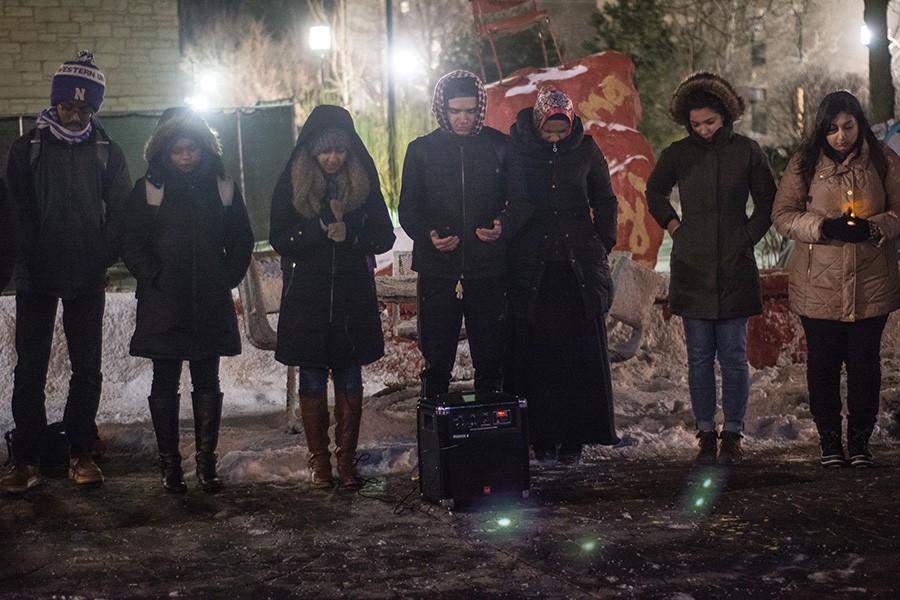 Students and staff members pray during a vigil at The Rock on Tuesday. The vigil was held to honor the lives of three young men killed last week in Fort Wayne, Indiana, and to pray for the recovery of a teen shot by a police officer in Salt Lake City over the weekend.

About 70 Northwestern students and staff members gathered at The Rock on Tuesday to honor the lives of three young men killed last week and to pray for the recovery of a teen shot by a police officer over the weekend.

On Feb. 24, Muhannad Tairab, Adam Mekki and Mohamedtaha Omar were killed “execution-style” in Fort Wayne, Indiana, according to CNN. The young men were 17, 20 and 23, respectively. Two were Muslim and one was Christian, CNN reported.

Three days later, 17-year-old Abdi Mohamed, a Somali refugee, was shot by a police officer in Salt Lake City, Utah. Mohamed has since woken up from a coma.

Experiences such as vigils are important for the NU community because students from diverse backgrounds can come together during times of tragedy, said Tahera Ahmad, associate chaplain and director of interfaith engagement.

“They’re able to share their deep sense of sorrow and their pain, and have a community — a safe and brave space where they can share their thoughts and reflections, and then also receive a kind of healing,” she said.

Weinberg senior Alaa Mohamedali said the vigil was important to her because she believes every single life lost should be recognized. Everyone should acknowledge the Islamophobia and racism that led to this, she said during the vigil.

“That’s why I’m usually the person who is found at every single vigil, regardless of religion or nationality or whatever it be, because any injustice is an injustice that I will stand against,” Mohamedali told The Daily. “This one meant something even more to me, because they’re from my homeland. It doesn’t matter to me if they’re Christian or Muslim, because they’re still people.”

McCormick senior Magan Omar, who spoke during the vigil, said he wanted to share his mindset about recent events around the nation, including the deaths of Trayvon Martin, Eric Garner and Michael Brown.

“I feel like the past four years have been a kind of emotional rollercoaster, kind of like a cycle,” he told The Daily. “Once these tragic events happen, I feel like I had to get right back up and chug on through academics and through whatever I’m going through at the time. I try to get through it, and then another tragic event happens.”

A couple of weeks ago, Omar said, he thought about the fact that a tragedy hadn’t happened in a while. However, the events of last week brought him down, he said. Although he usually prays about work and academics, Omar said he is nowadays just thankful to be alive.

Weinberg senior Laila Hayani, a member of Interfaith Advocates, said she was moved by the vigil and thought it helped put things into perspective. The speakers brought up many good things to consider, she said.

“Magan’s speech talking about how he’s just praying to be alive was very moving and unsettling, and also Alaa’s speech about racism within the Muslim community sometimes, which I also kind of see, because I’m also Muslim,” Hayani said. “We should contemplate a lot about these specific events because of the way that the community is reacting or not reacting to (them).”

Ahmad said she appreciates everyone who came out despite the cold weather. During the vigil, she cited a report from the Malcolm X Grassroots Movement, an organization of Africans and people of African descent working to defend human rights and promote self-determination, which states that a black individual was killed every 28 hours in 2012.

“It wasn’t just about these three people who passed away,” Ahmad said. “This is a constant thing that happens, and so really coming together and asking deeper questions, like what are the takeaways from this? What does this mean?”

She added that religion was not the motivation behind her attending the vigil.

“It was about the human dignity of every soul, and being there for my Northwestern brothers and sisters who are hurting and needed a place of healing and voicing their concerns, as well as their reflection and feelings,” Ahmad said.