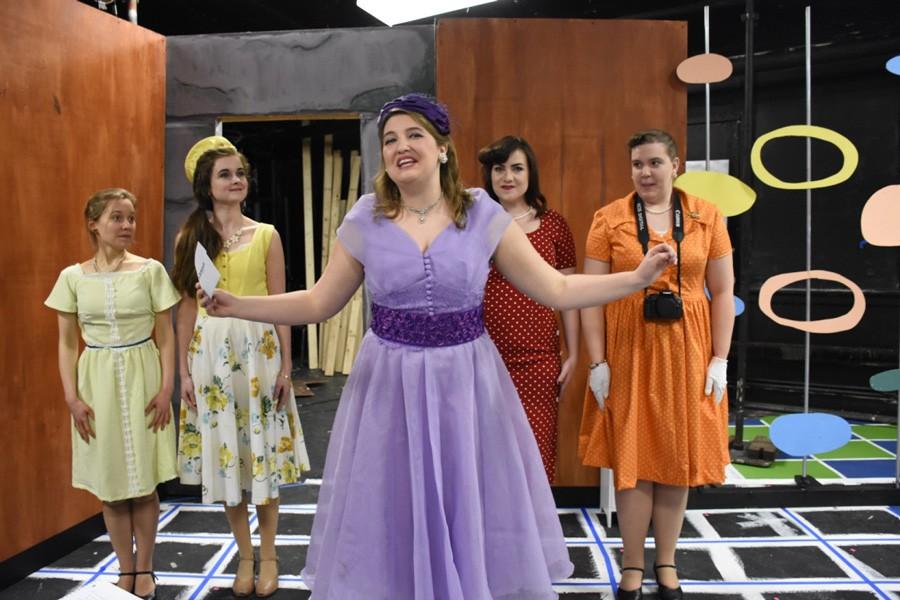 Students rehearse for the upcoming Lipstick Theatre production of “5 Lesbians Eating a Quiche.” The production will address queer and sexuality stereotypes in a 1950s setting.

Shanley Pavilion will be transformed into a 1956 feminist society meeting place this weekend for Lipstick Theatre’s production of the satirical comedy “5 Lesbians Eating a Quiche.”

The play satirizes and breaks down stereotypes of what it meant to be lesbian in the 1950s, Lipstick Theatre activism co-chair Jenna Perlstein said.

“It explores sexuality in a very specific time period of the 1950s,” the Communication junior said. “And it’s a satire, so it’s not satirizing necessarily being gay (or lesbian), but rather our conceptions of what being a lesbian means in this sci-fi, utopian 1950s frame.”

In the play, five women come together for a feminist society meeting over a breakfast of quiche. Halfway through, the building goes on lockdown and the women’s secrets begin to come out as they spend time in the building, the show’s director Hale McSharry said. The Communication junior added that the show touches on themes such as the fear America felt in the 20th century and the ways women were affected by gender policing and stereotypes.

These stereotypes are satirized through jokes intended to convey the absurdity of the stereotypes they are mocking, Perlstein said.

“There’s a line in the show where it’s like ‘No, you’re not that, you’re not a lesbian, you’re just a 30-year-old unmarried woman who likes to play softball every once in awhile,’” she said. “They’re really legible to us, we know what they mean, but we also know that because they’re so satirical and ridiculous and absurd.”

The audience will also play an important role in the play, as they are intended to be members of the committee at the meeting. Each “committee member” will be handed a name tag with a woman’s name as they enter Shanley, McSharry said. He added that at times, members of the audience will be addressed one-on-one and expected to interact with the cast.

Two events leading up to the play further explored the idea of queerness onstage today and in everyday life during the 1950s.

About midway through the rehearsal process, the cast and several crew members of the show listened to a presentation by Gender and Sexuality Studies Prof. Lane Fenrich on 1950s lesbian subcultures and other historical context from the era. This gave the actors and director a better understanding of gay and lesbian culture in the time period, Lipstick Theatre outreach chair Sophia Sinsheimer said.

“I think we have a lot of preconceived notions of that time period and of gays and lesbians,” the Communication sophomore said. “To hear from an expert about what it was actually like and what the social movements were like in that time period gives the actors more specificity to play on, so that you aren’t just going off of stereotypes, which is so important especially for a project where there are queer characters.”

The other event, “Quiche and Conversation,” was a community event held Feb. 25 at the Women’s Center. Members of NU’s queer and theater communities came together to eat quiche over an open dialogue about queer representation on stage, Perlstein said.

“The theme of the conversation was to talk about queer representation in theater more specifically and connect it to some of the dialogues that had been sparked by ‘For Colored Girls,’” Sinsheimer said.

Though the show addresses serious topics, it is also a comedy, and McSharry said he hopes audience members can recognize the effectiveness of comedy as a theater form.

“I really hope that it is — first and foremost — fun and an escape from the end of the quarter anxieties,” he said. “I hope they see the immense talent of these hilarious and funny women and that they get to see a new perspective on mid-20th century American life, womanhood and queer identity.”