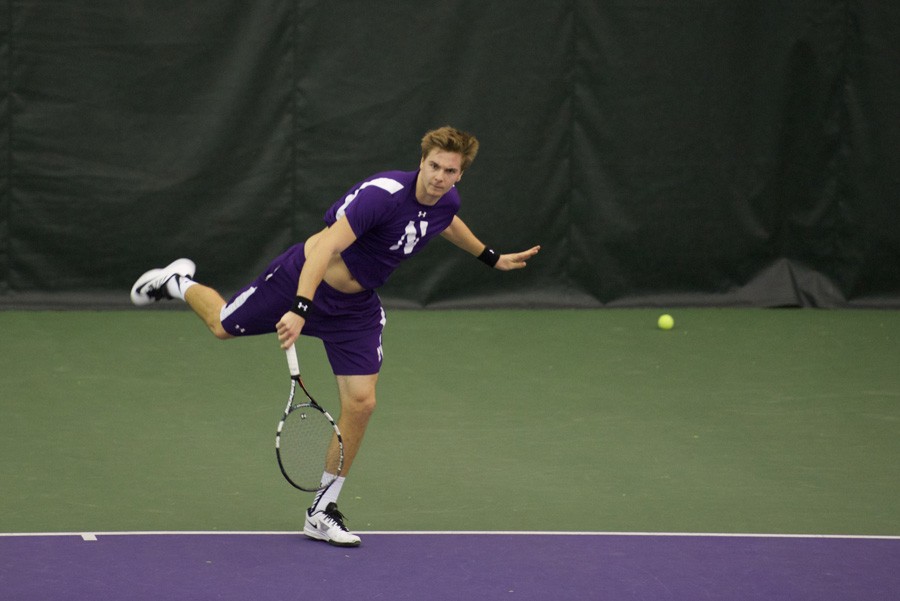 Fedor Baev fires a shot toward his opponent. The senior won the deciding point in a 7-0 Northwestern victory over No. 32 Harvard on Sunday.

Northwestern continues to rise up the rankings, setting new school records and leaving a trail of defeated ranked teams in its wake.

The No. 15 Wildcats’ win streak stretched to nine with a convincing 7-0 victory over No. 32 Harvard on Sunday. The victory also tied the 1988-89 team for the best start in school history at 12-1.

“For us it’s about getting better,” coach Arvid Swan said. “We’ve done some good things competitively, but we can still improve a great deal as a team, and we’re excited to play some really good quality teams coming up. The schedule has been good in terms of getting us ready.”

Harvard was just the latest in a series of ranked teams to fall to NU, as the Cats pushed their record to 10-1 against top-60 competition this year. Possibly the only way to avoid picking up a loss against NU is to cancel the match, as No. 8 TCU did last week due to bad weather.

The schedule change, however, didn’t phase the Cats, particularly junior Konrad Zieba who won 6-3, 6-4 at No. 1 singles. The win was Zieba’s eighth dual match win of the year, to go along with only two losses. Zieba also picked up a 6-3 win in doubles with fellow junior Sam Shropshire.

Junior Alp Horoz and senior Mihir Kumar won 6-2 at No. 3 doubles to help NU clinch the first point of the match.

“We just kept doing what we’ve been doing, bringing the energy and staying active at the net,” Horoz said. “It sets the tone for singles, and we kind of eliminated the crowd by winning the doubles point.”

In addition to the strong performance from Zieba, Shropshire also turned in a dominant performance, cruising to a straight-sets victory at No. 2 singles in addition to his doubles win with Zieba.

The Cats picked up the clinching point from senior Fedor Baev at No. 4 singles to secure the victory. Baev is now 9-3 in dual matches on the year.

“Being very competitive in all spots, singles and doubles, was key today,” Swan said. “The guys were obviously here to play. We’ve had some very tough matches with Harvard in the past. Overall, it was just a complete match.”

NU has defeated almost every team in its path, but the team’s sole loss this season came against No. 11 Illinois, the team that also happens to be the Cats’ next opponent as they take their shot at history.

If NU beats the Fighting Illini, its 13-1 record would be the best start in school history. However, it will be no easy task in part because the Illinois lineup features two of the top 11 players in the country in Aleks Vukic and Jared Hiltzik.

“That’s going to a big one,” Baev said. “We’re going to bring it all, and we kind of owe it to them to bring it this time after the loss we took at their place.”