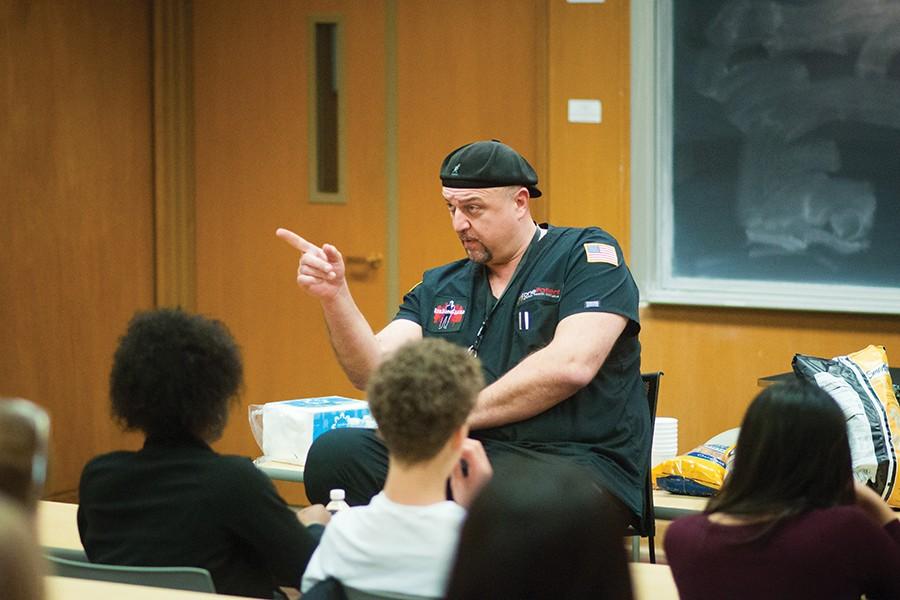 Humanitarian Daniel Ivankovich addresses a crowd of students from Northwestern and Whitney Young Magnet High School in the Technological Institute on Thursday. Ivankovich, the co-founder of nonprofit medical organization One Patient, encouraged students to make a difference in their communities.

Orthopedic surgeon and humanitarian Daniel Ivankovich (Feinberg ‘95) said he hopes more young people will take the initiative to make a difference in the community during a talk Thursday.

Ivankovich addressed the health issues of Austin, a Chicago neighborhood that is one of the main communities served by his nonprofit, OnePatient Global Health Initiative, to an audience of about 20 in Technological Institute. Austin is one of the 15 to 20 most impoverished communities in America, Ivankovich said.

“They are believed to be less because they have less, but that is not the case,” Ivankovich said. “The problem is that they lack access.”

Ivankovich — co-founder of OnePatient, which was created in 2010 to treat patients who have musculoskeletal health disorders, regardless of their ability to pay —  is an American orthopedic surgeon, humanitarian, media personality and blues musician from Chicago. He has won numerous accolades for his work, including the Chicagoan of the Year award in 2010 and the CNN Hero award in 2015.

Ivankovich said he was initially unsure of his future career but decided to go into medicine. He became an orthopedic surgeon specializing in spine treatment, reconstruction of hips and knees, and fixing bones, he said — but that was not enough for him.

One day, Ivankovich said he treated a 48-year-old woman with horrible knee arthritis, but he said he realized fixing the woman’s knees would not also solve her poverty problem.

That was when the idea to start OnePatient entered his mind.

“Some of the most powerful stuff that I’ve done as a doctor have never involved me lifting a knife,” Ivankovich said. “Our program is designated to take care of the entire patient … We are trying to give people back their lives and take them from disability to functionality.”

The average salary of an orthopedic surgeon is $400,000, while some surgeons earn as high as $1 million, he said. Working for a nonprofit organization has lowered his salary, but he said he was firm in his decision to help the underserved with his medical knowledge.

“You don’t have to limit yourself,” Ivankovich said. “That’s my challenge to you … because you guys are the generation that can make a difference.”

Weinberg junior Carolyn Brooks, who organized the event with TedX Northwestern, said she was impressed by the NU student turnout.

“My expectation was that only the high school students turn up,” Brooks said. “The fact that other Northwestern students also turned up to hear the talk was thrilling to me.”

Brooks invited students from Whitney M. Young Magnet High School to hear Ivankovich talk with the goal of inspiring high school students to make a difference in their community.

One Whitney Young student, Bryce Jamesson, said he enjoyed the talk because Ivankovich highlighted problems in minority communities and discussed how the nation does not look equally at those populations.

“I want to help those communities in my own way,” the high school freshman said. “I don’t know how to do it yet, but I will figure it out.”