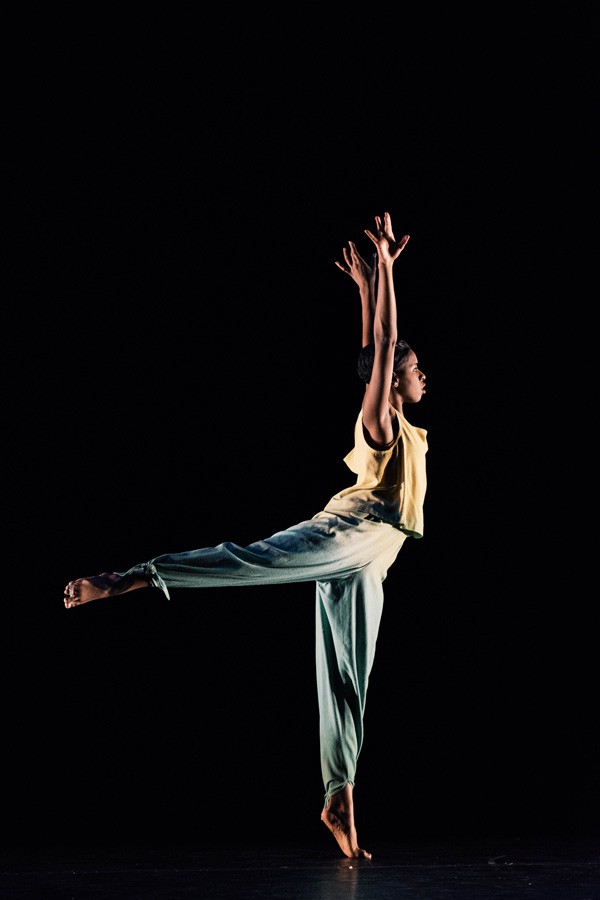 A student practices a piece for Northwestern’s upcoming “Danceworks.” The show will feature choreography by Garth Fagan, who choreographed “The Lion King” on Broadway.

“It gives me that feeling of ‘Am I going to fall? Am I going to land this?’” she said. “There’s always that element of surprise.”

Twelve Northwestern dancers will perform the first piece Garth Fagan choreographed after he finished choreographing “The Lion King,” in “Danceworks 2016,” the Dance Program’s annual performance. The show opens this weekend and will feature works by five choreographers.

Fagan originally choreographed “Two Pieces of One: Green,” the piece that will be featured, in 1998 for Garth Fagan Dance, a dance company that he founded.

“His goal for the piece was to be very different than “The Lion King” because he was trying to create a piece of abstract art on the plain stage, where the music didn’t necessarily match the choreography so the rhythm is in the dancer’s music,” Nadon-Enriquez said.

Fagan said the music for his piece is a juxtaposition of 20th century and 16th century music.  He added that these are two very different types that incorporate jazz rhythms and classical rhythms.

Fagan saw students perform his piece for the first time on Friday night at a talk that he gave to the public. He said he enjoyed seeing the students perform because he often works with professional dance companies and appreciates the new style that students put on the piece.

“I remember how difficult it was for the dancers,” Fagan said. “And when I see how beautiful the students have gotten, and I know the work, it just inspires me.”

Nadon-Enriquez said his style is very different from anything she had been exposed to, as she trained in only classical ballet for 10 years. She was unsure of it at first because of the different style, but soon learned to appreciate it.

“It’s much more grounded,” she said. “Ballet is really light and is all about your posture and there’s not a lot of upper body movement, whereas with this every movement takes your entire body.”

Fagan describes his style of dance as “a jazz man’s approach to choreography.” He said he uses improvisation, leaps and turns to surprise the audience so they never know for sure what movement is coming.

“Movement invention is my strong suit,” he said. “I love coming up with new moves that you haven’t used before that are unusual combinations that are sometimes difficult but refreshing.”

In his general choreography, Fagan puts a South African spin on well-known dance styles, such as ballet and modern, said artistic director and Communication lecturer Joel Valentin-Martinez. This polyrhythmic style of dance, with two or more rhythms not necessarily on the same meter, contradicts traditional rhythms, he said.

Valentin-Martinez, who selected Fagan as a choreographer for “Danceworks 2016,” was originally introduced to Fagan’s work when he was 16. He said Fagan’s choreography changed his perception of what dance could be.

“When I saw his work I thought, ‘What is this movement?’” said Valentin-Martinez, who is also director of the Dance Program. “It blew my senses of what movement is, what dance was at that time.”

“Touring, performing and engaging with Garth and his artistry really has informed me about the field of dance, who we are as humans, who we are as artists, and has had a huge impact on the way I form ideas about dance,” Valentin-Martinez said.

Years later, Valentin-Martinez is coming back to his dance roots and described “Danceworks 2016” as a “thank you” to his former mentor.

“Danceworks this year is an open canvas where I could allow each choreographer to choose whatever theme or idea or choreography or revival that they wanted to bring to the table,” he said. “It took me a while to figure out what choreographers would work for this concert, and it’s mostly based on trying to get some of the best choreographers that I could find and know.”

Simas choreographed a piece that deals with skin and perception and how people internalize judgment and perception, she said. This is her first time participating in Danceworks, and like Fagan, her work involves improvisation.

The piece Valentin-Martinez choreographed is reflective of his California background and how the ocean affected his views on movement and dance.

He said he is thankful for all of the work the choreographers and dancers have put into the show and feels especially privileged to share the work with Fagan.

“It’s a community effort,” he said. “It’s not one person; it’s not two people. It’s an accumulation and it’s a process. For the dancers to have Mr. Fagan present — it’s a treat and we in the dance world really cherish it.”