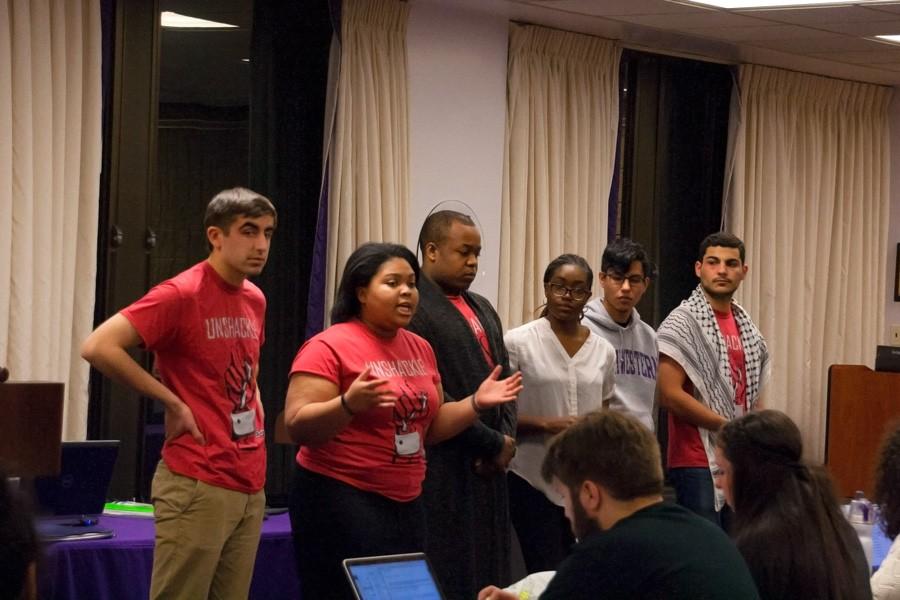 Members of Unshackle NU present legislation Wednesday night at Associated Student Government Senate that would call on the University to divest from corporations they say benefit from the mass incarceration of people of color. The resolution, which will be voted on next week, was sponsored by 21 student groups.

Unshackle NU introduced legislation Wednesday at Associated Student Government Senate to pressure the University to divest from companies the group says promote the prison-industrial complex and to create a socially responsible investment committee.

The proposal comes one year after a Northwestern Divest resolution narrowly passed Senate, calling for the university to cease investment in companies the group said violate Palestinian human rights.

Unshackle NU members presented the resolution after a protest at The Rock on Tuesday. Currently, NU has less than $1 million invested in G4S, the largest security corporation in the world, and also likely has indirect investments in Caterpillar, William McLean, NU’s chief investment officer, told The Daily. The resolution names other corporations Unshackle NU believes the University may be invested in, such as the Corrections Corporation of America and the GEO Group. McLean said NU has no investments in the other companies named.

“Northwestern’s importance and proximity to Chicago is something that needs to be one of the main focuses of the reality of why Northwestern really should not be involved in violations that occur in private prisons and correction centers,” For Members Only senator Gwendolyn Gissendanner said.

The SESP sophomore added that the prison-industrial complex and mass incarceration disproportionately affects people of color.

“Actively investing in things that are terrorizing communities of people of color on this campus is not a good thing,” Gissendanner said. “It brings into question the way Northwestern supports its students and the way it wants to be involved in Chicago should not be in human rights violations.”

The resolution, which will be voted on next week, was sponsored by 21 student organizations, including NU Divest, Students for Justice in Palestine and For Members Only.

The resolution also calls on the University to create a task force with elected student representatives to increase transparency about investments and cease investments that Unshackle NU members say oppress people of color.

ASG has a responsibility to represent the interests of students of color and pass the resolution to hold the University accountable, Muslim-cultural Student Association senator Yusuf Kudaimi told The Daily.

“I really hope that people see the reasons behind Unshackle putting forth this resolution,” the Weinberg sophomore told the Daily. “They just don’t want us as a university to be complicit in these systems that a lot of the students are affected by.”

The committee will also include four voting members from the ASG executive board, as well as five students not involved in ASG to provide an outside perspective, said ASG president Noah Star, a Weinberg senior. The independent committee will look for ways to implement reforms in Senate.

Following representation reform that failed last week, legislation that would increase Multicultural Greek Council and National Pan-Hellenic Council representation and combine the on- and off-campus caucuses into one residential caucus was presented.

“This is something that can be passed before elections so we don’t need to wait another year for these to take effect, time during which interests of marginalized students will continue to be underrepresented,” said SESP freshman Ben Powell, co-author of the legislation.