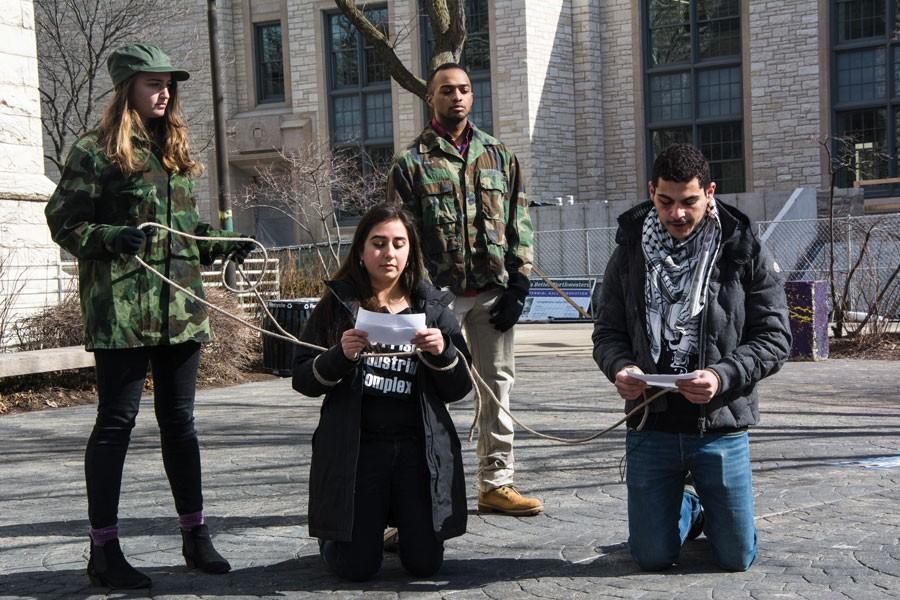 Students dressed in officer uniforms with “G4S” taped to their backs restrain other students acting as prisoners in a demonstration at The Rock on Tuesday. The demonstration was organized by student divestment campaigns Unshackle NU and NU Divest, which are both calling for the University to divest from security company G4S.

As people crowded near The Rock on Tuesday afternoon, two students dressed in officer uniforms with signs reading “G4S” taped to their backs held up ropes tying down two kneeling students who were shouting, “I was detained for 17 hours without food or a bathroom.”

Unshackle NU and Northwestern Divest joined together for a demonstration at The Rock depicting the harsh treatment they said detainees in private prisons experience. The demonstration preceded an event held Tuesday evening about violence against migrants at national borders.

Both student campaigns are calling for the University to divest from G4S, an international security company the groups say contribute to the prison-industrial complex.

“Essentially what we want to show is how our campaigns’ struggles are linked,” said Weinberg junior Marcel Hanna, a member of NU Divest and Unshackle NU. “We want to show how the inhumane treatment of the prison-industrial complex both here (in the U.S.) and in Israel and Palestine treats the detainees and how they’re stripped of their human rights.”

The routine was about four minutes long and was repeated whenever crowds picked up in size. Weinberg sophomore Yusuf Kudaimi, an NU Divest member, was the first to narrate the introduction, which stated administrative detainees in Israel are imprisoned for months or years without a trial date. Administrative detention — the arrest and detention of individuals by the state without trial, usually for security reasons — is a practice also criticized by some Israeli and international human rights organizations.

Kudaimi also said the incarceration of administrative detainees is in violation of international human rights law and that G4S’ activities in Israeli settlements do not “serve the general public” because the entrance of Palestinians into the settlements is severely restricted.

Hanna told The Daily the organizers particularly focused on finding testimonies from women of color and transgender women of color in order to give a voice to everyone affected by the system.

Students passing by on their way to and from class stopped to witness the demonstration. Weinberg sophomore Kevin Pu said it was an effective way to educate others about their cause.

“I think (The Rock) is good place to do this to bring more awareness,” Pu said. “Even though people know about the issue, they don’t actively care about the individuals involved who are victimized by a system that is really bad.”

However, other students were concerned about the manner in which the repeated demonstration was carried out.

McCormick freshman Nathan Ioriatti said he sympathized with the demonstrators’ cause but found their demonstration potentially off-putting.

“I dislike private prisons — the idea of an independent individual profiting off the dismays of others doesn’t sit right with me,” Ioriatti said. “But I find that aggressive protests like these can leave people feeling ostracized. These demonstrations can make people feel uncomfortable but should not be polarizing. Treating humans like humans is something we can all get behind.”