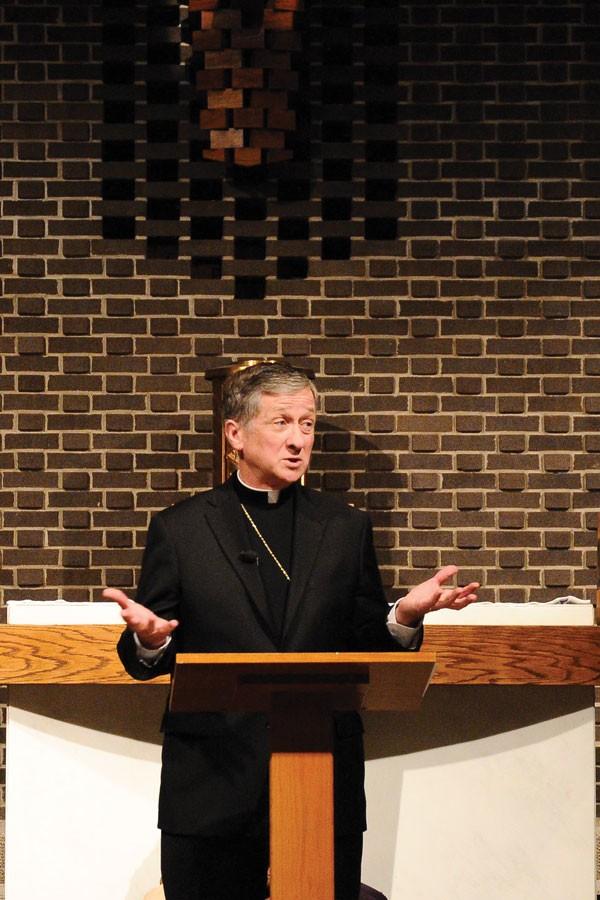 Archbishop Blase Cupich educates an audience at Sheil Catholic Center about Pope Francis. Cupich’s talk to an audience of about 80 people marked his first visit to Sheil.

Archbishop Blase Cupich visited Sheil Catholic Center for his first time Tuesday to talk about Pope Francis, the papacy and qualities that make the pope an extraordinary Catholic.

Sheil hosted about 80 students, children and adults for the presentation that was meant to be a more intimate fireside chat before the sizable crowd slowly filed in. After a brief introduction that poked fun at the larger-than-expected setting, Cupich began his speech with an acknowledgement of how much he has enjoyed visiting various Chicago-area universities and speaking with students about what they plan to do in the future.

He then progressed to the topic of Pope Francis, saying that he has observed great interest in the pontiff from many people he’s talked to in recent months. Cupich spoke of his meeting with the pope in June, and what he noticed in the Bishop of Rome that changed his perception of the powerful figure.

“You get a sense that this man is a real human being,” Cupich said. “He really changed the outlook on the papacy. He really believes Jesus is leading the Church and is alive in spirit.”

Cupich focused his presentation on the qualities he said make Pope Francis unique and remarkably personable. He cited the Pope’s authenticity, effective dialogue, grace and simplicity as the reason for the new, more approachable impression of the papacy.

The pope engages in conversation by listening, respecting what people have to say and waiting for his turn to respond kindly, a method that could remedy many of the issues our world faces, Cupich said.

“At least have the openness by which you’re going to at least listen to the other side of a situation,” Cupich said. “We’ve had too many conflicts, battles and wars that could have been dealt with in another way if people had just entered into dialogue and negotiations.”

The speech concluded with the archbishop offering advice to the audience, recommending that individuals stay authentic, like the pope, in order to overcome their struggles. After a Q&A section, Cupich met with the crowd at a reception in the building’s basement.

Members of Sheil were enthusiastic about Cupich’s visit and presentation, saying his focus on the Pope was a good way to garner the interest of such a large and diverse audience. The event was a great opportunity to get to know more about the archbishop and the pope, said Marina Porter, secretary of Catholic Students Association.

“He focused a lot on how Pope Francis really tries to reach out to people, both within the faith who have lost their way as well as people of other faiths,” Porter said. “It’s super cool that the archbishop and Pope Francis had met each other and he got to talk about that experience.”

Getting the relatively new archbishop to visit Sheil was a priority, said Pastoral Associate Mary Deeley, and his presentation exceeded expectations. The archbishop’s focus on dialogue and empathy was impressive and has ushered in a different and refreshingly new church scene in Chicago, Deeley said.

“That spirit of love and joy that the Pope has brought is something that Archbishop Cupich embodies in a lot of ways,” Deeley said.