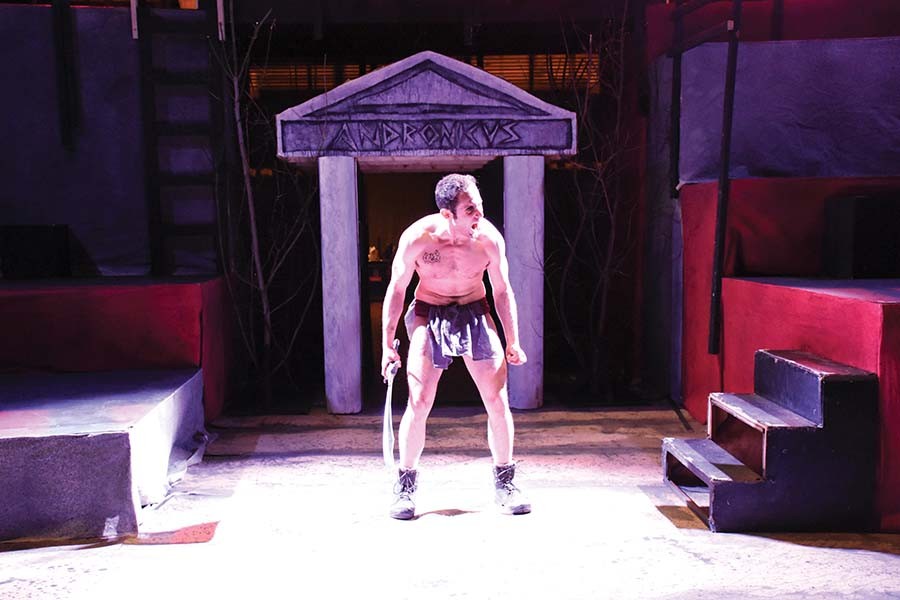 Opening this weekend, in the Louis Room at Norris University Center, the show will shake up the traditional theater experience, said director Michael Fleischer, a Communication senior. The show will be produced by Lovers & Madmen, a Northwestern student theater board a special emphasis on Shakespeare.

“Titus Andronicus,” Shakespeare’s first revenge-tragedy, follows the character Tamora as she takes her revenge on the Andronicus family for having sacrificed her oldest son and the character Titus, as he slowly loses his grip on reality, said Tulsiani, a Communication senior. The main crime in the play is the rape of Titus’ daughter, Lavinia.

With the presence of sexual violence and other controversial subjects, the show tackles emotional issues relevant to college students, Fleischer said.

“Part of the beauty of this play is that it deals with so many things,” Fleischer said. “It’s not just sexual violence. It also deals with grief, the consequences of war, mental health, race relations.”

The show includes intense fight choreography, Tulsiani said, and some actors have been injured during rehearsals.

One actor fractured his wrist, one cut open a finger and several dealt with knee and ankle injuries, Fleischer said.

The brawling will be brought to life in the audience with a “bloodzone.” Here, audience members will be sprinkled in fake blood or will witness severed body part props flying near their faces, Fleischer said. He added the gore is designed to shock, and the amount of stage combat in the show lasts a full 14 minutes.

The play’s topics were addressed behind the curtain as well, Tulsiani said. By constantly checking in on the well-being of the actors, the production team ensured that performers felt safe and valued while working with sensitive material, she said.

“We have really integrated social responsibility into our production process in a way that is really exciting and refreshing,” Tulsiani said.

Fleischer added that this dedication to social awareness was not left at rehearsals.

The crew partnered with the Red Cross to sponsor a blood drive and with Rape Victim Advocates, a nonprofit based in downtown Chicago that offers counseling and legal advocacy to sexual assault survivors. Fleischer said the organization will have talk backs after each show, discussing rape in the play and on college campuses and how to prevent it.

Communication senior Courtney Quinn, who plays Marcus in the show, said she hopes the show also helps to ignite a dialogue on how sexual assault is handled today.

“We need to be exploring, why as a society we are still dealing with these problems 400 years later,” she said.

Fleischer added that one of the reasons he chose the show in the first place was because he felt that it hits different taboo topics that need to be discussed on campus in an accessible way.

“I just feel that theater should be an event,” Fleischer said. “Not just a high-class, elitist, bourgeois, ‘I am a fancy millionaire, so I’m going to buy tickets to this’ thing. That’s not what theater is. Theater is for every person.”