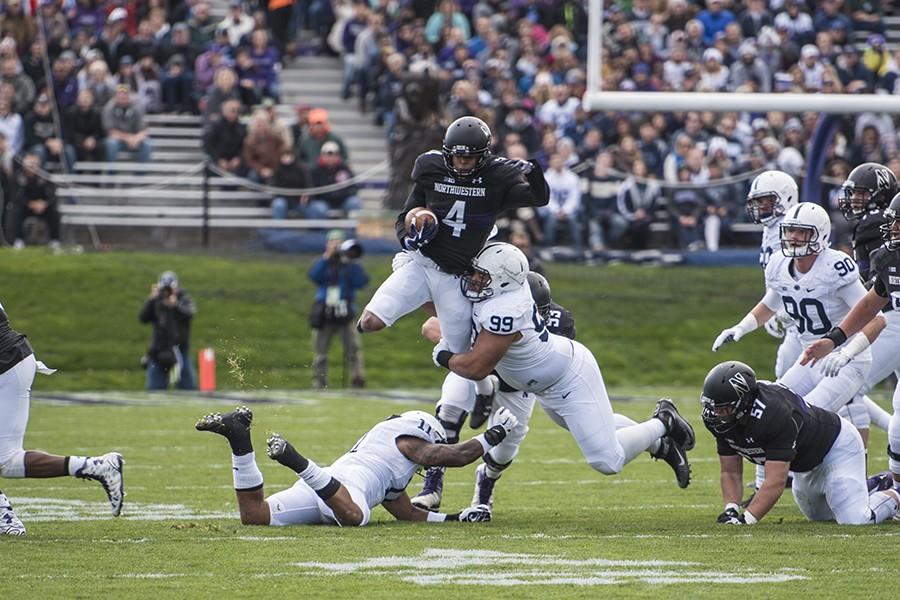 Solomon Vault hurdles a Penn State defender. The sophomore will see more opportunities in open space as he transitions to wide receiver.

Northwestern’s spring practices began Tuesday, and for some Wildcats that meant a change in football scenery.

Fitzgerald said he made the moves to increase competitive depth at the wide receiver position. Throwing the ball was a sore spot for NU’s offense last season, with the Cats ranking dead last in the Big Ten in passing yards per game.

Vault started as kick returner and took snaps at running back last year and already has experience as a pass catcher and offensive playmaker. Reese and McShepard will face a bigger challenge in adapting to the position, but Fitzgerald said the bevy of talent NU possesses at defensive back made it easier to ask Resse and McShepard to switch.

“We have to get better throwing the ball,” Fitzgerald said. “We just felt like (McShepard’s) skill set athletically was better than being on the sideline. He’s been a third or fourth corner his whole career, and this gave him an opportunity to go over and start right away. If today was any indication, I think it was the right move.”

Additionally, five players will miss the entirety of spring practice to rehab from offseason surgery. Sophomore backup quarterback Matt Alviti is recovering from a hip injury, early enrollee Tommy Carnifax is out after undergoing surgery on his shoulder and knee and Reese, junior running back Warren Long and junior offensive lineman Eric Olson are also out with undisclosed injuries.