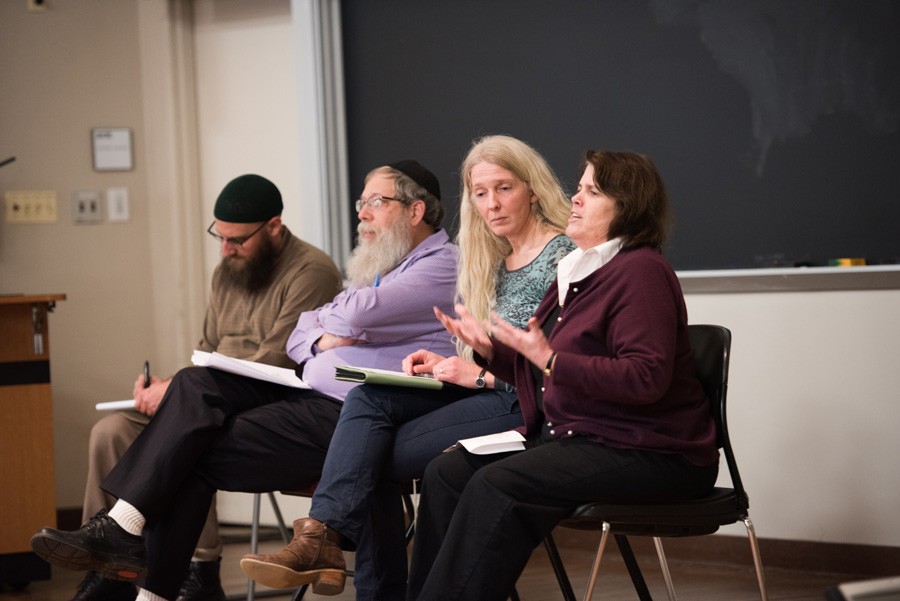 Four college religious leaders discuss the intersection of of sex, love and religion. SHAPE hosted the panel to spark dialogue about sexuality and religion on campus.

Though different faiths may have different views on sexuality, love remains a unifying theme, said four religious leaders at a panel organized by Sexual Health and Assault Peer Educators.

Despite differences in opinion that arose, the panel stuck to a common thread of the importance of love in religion.

“The guiding principle is that (people in a relationship) explore that relationship as a whole being, so it’s not just about suddenly going to 90 miles an hour as a physical self but also moving along as an intellectual and emotional and a spiritual self with that partner,” Deeley said to the audience of more than 30 people.

One topic the panel debated was the role of premarital sex. Windsor Mitchell said although sex is an important topic to be discussed, it does not necessarily need to occur within the boundaries of marriage, but can happen outside marriage within the same bounds of intimacy, trust and love.

Klein explained that in the context of Orthodox Judaism, sex could blur the objectivity necessary in finding life partners. Under Islam, premarital sex is viewed as an exploitation of the woman by the man, oppression against the woman if the man is not willing to marry her, Ryan said.

The panel went on to discuss contraceptives, with contrasting viewpoints over their role. While Deeley and Ryan opposed birth control as a means to avoid responsibility, Klein and Windsor Mitchell supported it as a means of acting responsibly.

“There’s a Yiddish expression that I like to use as an Orthodox Rabbi, it’s called ‘no choopy, no shtoopy’,” Klein said. “This literally means, ‘no canopy, no sex’.”

Despite differing viewpoints, the four panelists agreed love and sexuality have their place in religion, whether in religious beliefs or scripture. They also emphasized the importance of healthy relationships.

Weinberg senior Erik Baker said he appreciated the diversity in opinions across the panel, which allowed audience members to see both the differences and commonalities across different faiths regarding sex. As the speakers discussed their different perspectives, core messages emerged from the discussion, Baker said.

“I took away that ultimately across religions the emphasis is on the centrality of love and about how ultimately sex and sexual intimacy are really valuable when they can foster that kind of love between two people,” he said.

SHAPE event co-chairs Sophie Jacob, a Weinberg senior, and Daniel Bender Stern, a Communication senior, said they hope the event sparked a continued conversation about sexuality and religion across campus.

“I think it’s an important jumping off point, but I don’t think the conversation stops here,” Bender Stern said. “This is something that a lot of people grapple with as they grow up and are figuring out who they want to be as an independent being, that sexuality is a huge role but that doesn’t mean that they are ready to give up their faith.”