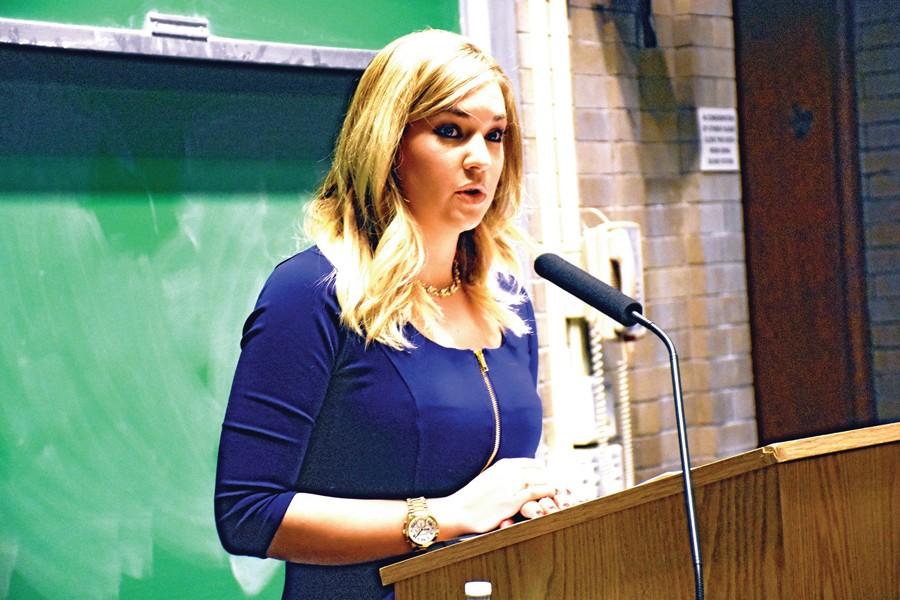 Economic policies under the Obama administration have “destroyed my generation and its future,” said conservative Townhall.com editor Katie Pavlich at a Monday event hosted by Northwestern University College Republicans.

The 27-year-old political commentator and journalist spoke to more than 40 people as the group’s annual winter speaker, a series which last year hosted former terrorism analyst Jonathan Schanzer. Pavlich’s address was followed by a Q&A and touched on a variety of topics including the upcoming presidential election and microaggressions on college campuses.

“Being on a college campus I’m sure you’ve all heard of, or live in a world full of microaggressions and trigger warnings — as if they’re real things that matter in life,” she said. “There are no trigger warnings in the real world, and so called microaggressions make young people look like entitled minors not worthy of employment or any kind of serious, adult respect.”

Pavlich graduated with a Bachelor of Arts in broadcast journalism from the University of Arizona, where she was a “rowdy activist,” she told The Daily. In 2013, the Conservative Political Action Conference named her Blogger of the Year for her work at Townhall.com.

Microaggressions and trigger warnings were part of Pavlich’s larger theme: the “battle of socialism versus capitalism” and future of the millennial generation. She said a lack of understanding and “liberal indoctrination” had set her generation on a path toward high unemployment and misinformed beliefs.

College Republicans president Harrison Flagler said the group brought Pavlich for her strong belief in capitalism and unique perspective as a member of the millennial generation. He said the event, held in Swift Hall and open to the public, had the highest attendance of any winter speech during his time in the group.

“Every winter, the speaker that we bring in is usually somebody who is an up-and-coming conservative activist,” the Weinberg senior said. “It’s great to have somebody who is a millennial to come in and talk about why capitalism is better than socialism.”

Axel Boada, a registered Democrat who attended the event, said he disagreed that Obama had negatively impacted his generation’s future, and that the exclusion of race from Pavlich’s speech undermined some of her key arguments.

“To make such a blanket statement that life today is good, and that kids are imagining problems that aren’t here is a bit harsh, because life is really good for a very select few of us here in America,” the Medill junior said. “To not talk about the ways that Republican ideologies have disenfranchised people of color shows that, in general, the Republican party in its current state is very self serving.”

Pavlich concluded by reiterating students should engage in debate rather than shutting people out.

“You don’t have to agree with what someone says, but you should be open to learning and thinking about why you disagree with someone,” she told The Daily. “It’s to your benefit to know more, not less and shouting people out of a conversation is certainly not the way to enlightenment.”