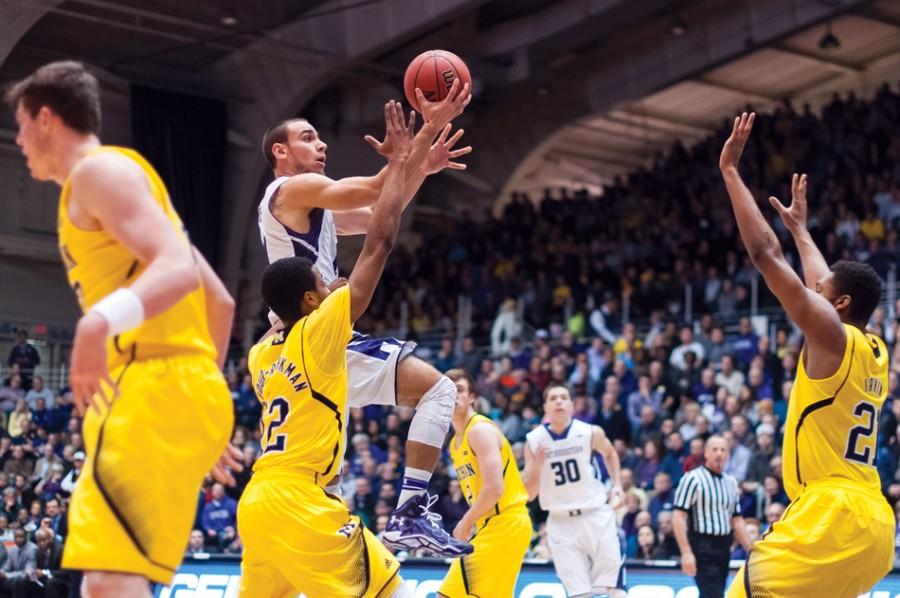 Tre Demps flies in for a layup. The senior guard led Northwestern past Michigan in a dramatic game last season, hitting 3s to force overtime and double-overtime.

For most of the last season’s Senior Night showdown with Michigan, Tre Demps was having a forgettable night.

“I definitely remember just the first 35, 36 minutes of the game, just kind of letting the Michigan defense get the best of me,” he said.

That virtuoso late-game performance from Demps, who scored 13 of his 20 points in the final 10 minutes and change, powered the Cats to their most memorable win of the 2014-15 season. It was a back-and-forth battle to the end that those in attendance will likely never forget.

Rewatching film of that game in preparation for Wednesday’s showdown in Ann Arbor, coach Chris Collins said the high level of shot-making on display down the stretch from both sides that day stood out.

A lot has changed in roughly a year for that wild game’s hero. Following an honorable mention All-Big Ten season that earned him a reputation as a high-level scorer, Demps has had an up-and-down year, raising his scoring average to a career-high but shooting at a much lower clip from the field. Every great game, such as his 30-point outburst against then-No. 3 Iowa, has been balanced by an awful game, such as his 2-of-14 shooting effort against then-No. 12 Michigan State.

Fellow senior Alex Olah was NU’s leading scorer in that last Michigan game, putting up 25 points and 12 rebounds and dominating a weak Wolverine front line. But a foot injury has slowed the center in his final season, as he’s put up just 10.6 points and 5.1 rebounds per game this season.

Meanwhile, not much has changed for Michigan stylistically. The Wolverines still fill their lineups with shooters, spread the floor and look to shoot their way past their opponents. Michigan has hit 40 percent of its 3-pointers this season and has ridden its perimeter attack to a spot on the NCAA Tournament bubble after finishing at .500 last season.

But the faces are different for the Wolverines. With star senior Caris LeVert sidelined with injury, guard Derrick Walton Jr., who missed the matchup last season with injury, is the team’s leading active scorer. Transfer forward Duncan Robinson, who sat out last season, has become an ace shooter from distance for Michigan and is draining 47.1 percent of his 3s this season.

Additionally, the Wolverines seem to have found an answer inside in junior Mark Donnal. The big man, who played just 6 minutes in last year’s thriller, is coming off a big-time 25-point game Sunday against then-No. 6 Maryland. Collins said Donnal is a “prototypical (Michigan coach John) Beilein big” because of his ability to score inside and out, posing a difficult matchup for Olah and the Cats’ more-traditional big men.

So much has changed on both sides since last season’s epic game, and it’s impossible to expect the same kind of crunch-time fireworks in Wednesday’s matchup because they’re so rare.

But that’s what made last season’s classic so special, and the memory of that crazy battle is still with the players who lived it.

“It was a good ending, and we were able to get the win,” Demps said. “It was definitely something that you’ll remember for a long time.”