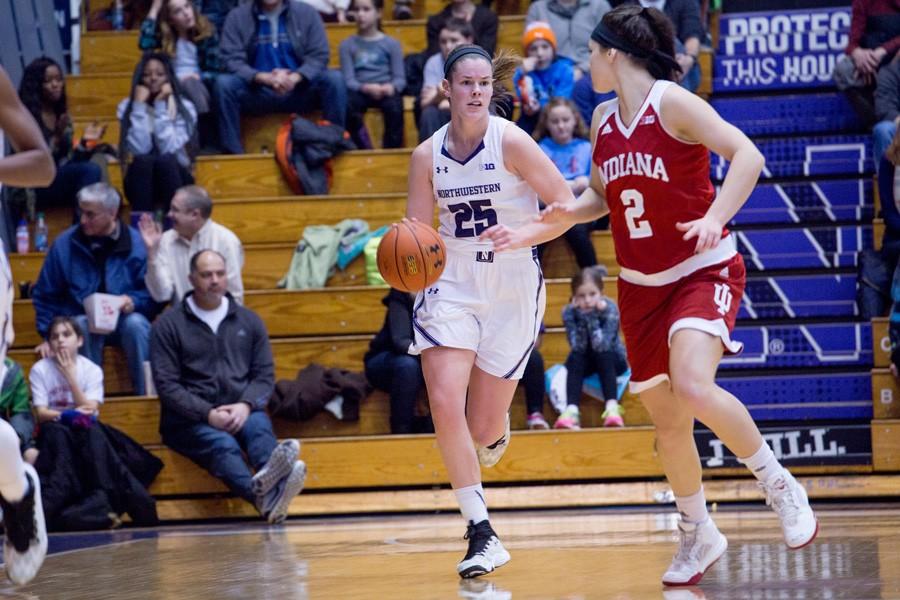 Maggie Lyon dribbles up the court. The senior will be playing her final regular season game at Welsh-Ryan Arena on Tuesday night.

Joe McKeown has often said improving is his primary concern.

As a result, the coach is staying upbeat as Northwestern (15-13, 4-12 Big Ten) heads into its home finale Tuesday against Michigan (16-11, 8-8). The Wildcats, coming off a 71-53 win Saturday at Wisconsin, are continuing to improve, McKeown said.

“We’ve had some scoring droughts; we’ve had some defensive breakdowns, that’s why we’re 15-13,” he said. “We’re just not as consistent as we would like to be, but we’re getting better.”

NU’s inconsistency showed last week. A Penn State team mired near the bottom of the Big Ten rolled through the Cats on their home floor Wednesday, shooting nearly 54 percent en route to a 73-54 win.

Saturday, however, NU took down the Badgers on the road, thanks in part to 12 fastbreak points. The transition scoring came in stark contrast to recent losses against Iowa and Rutgers, in which the Cats scored just 6 combined points on the break.

“That’s been our focus from the beginning of the season; we wanted to be a running team,” said junior forward Nia Coffey, who scored 15 points and added 11 rebounds Saturday. “We were just really happy with the way we were running and performing in transition, and we want to make sure we can keep up that tempo.”

Saturday’s win snapped a 4-game losing streak for NU, which has yet to win consecutive conference games all season. Following a win over Illinois nearly three weeks ago, the Cats allowed 112 points to Minnesota in a double overtime loss and scored just 59 points in the loss to Rutgers.

In some ways, the Cats are trying to salvage their season. NU started 10-0 and reached as high as No. 12 in the AP poll, but has won just twice in its past 11 games, all but extinguishing hopes of returning to the NCAA Tournament.

The Cats will most likely finish 11th or lower in the 14-team Big Ten and play on the first day of the Big Ten Tournament. Nonetheless, senior guard Maggie Lyon said it is still important for NU to build off Saturday’s win.

“It’s huge. Anytime late in the season you want to be playing your best,” Lyon said. “Hopefully we can gain some momentum right now.”

The Cats could play at home in a second-tier postseason tournament, but Tuesday’s game may be the last at Welsh-Ryan Arena for Lyon and NU’s other three seniors. Although the team held Senior Day ceremonies a couple of weeks ago, Coffey and Lyon both said Tuesday will be emotional.

Both added that they are more focused on playing well.

“It’s kind of crazy to think about, if you really think about the last game and everything and what’s gone on before,” Lyon said. “I’m just going to try to focus on the game at hand. It’ll be emotional but I’ll try to keep emotions for after the game.”

Tuesday’s game is NU’s third in seven days. McKeown, however, brushed that aside and said he is more focused on his team’s play.

“By this point you’re just playing,” McKeown said. “We have goals coming down the stretch. Last couple years, we’ve played really well late in the season. That’s our goal.”