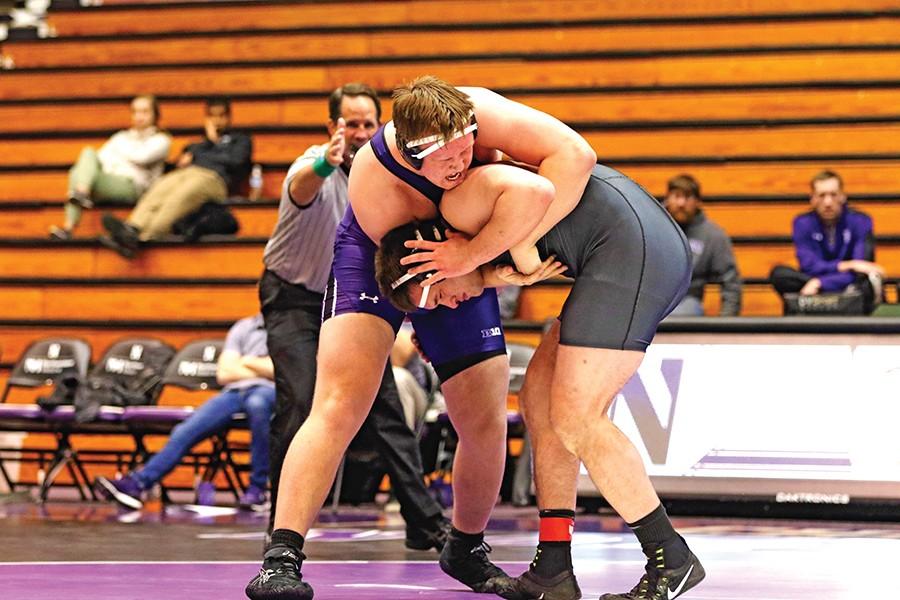 Conan Jennings wraps up an opponent. The redshirt freshman pulled out a last-second victory in the final match of Friday night’s dual with Duke, giving Northwestern it’s second victory of the season on Senior Night.

For the first time in almost three months, the Wildcats enjoyed the sweet taste of victory.

Northwestern defeated Duke in the last second of the final heavyweight matchup of the Senior Night dual for a thrilling come-from-behind victory, giving the team its first win since Nov. 29.

The Cats (2-13, 0-9 Big Ten) beat the Blue Devils (6-9, 1-4 ACC) 20-19 on Friday, after losing an early 10-0 lead only to come back and win the meet in the last match of the dual. With only one wrestler left, NU relied on redshirt freshman Conan Jennings to end the team’s winning drought, and Jennings didn’t disappoint.

Interim coach Matt Storniolo said he was proud of Jennings for coming through for the team, especially after he was on the losing end of the same situation against Michigan State, Minnesota and Illinois in three consecutive duals a few weeks ago.

“I told Conan before the match, ‘What are you going to do?’” Storniolo said. “He said, ‘Win.’ I said, ‘No, you’re going to wrestle hard for seven minutes and let the winning take care of itself,’ and that’s what he did. It was nice to see Conan pull through in that clutch situation. I know it probably hasn’t been easy on him having some of the dual meets come down to him.”

Friday’s match against the Blue Devils was the last home dual for NU’s graduating seniors, who were jumping up and down from the bench during Jennings’s match.

The heavyweight wrestler started the match down 1-0 but tied it up with one period remaining. Then, with just one second left in the dual, Jennings’ opponent was called for his second stall warning, and the refs awarded Jennings a point, giving the 285-pounder a 2-1 victory.

Jennings’ match tied the dual at 19-19 and forced the teams to go to a tiebreak. Since NU had more points from falls and forfeits, the team won on first criteria. Senior Dominick Malone, who did not get to wrestle in his Senior Night meet because his opponent forfeited, joked after the match that the team could thank him for the victory.

“For me personally it was tough because I didn’t have a guy,” Malone said. “But you know I’ve had so many more (duals) here, and in retrospect it’s not a big deal. The forfeit ended up being the difference, so you guys are welcome.”

Although Malone did not get to compete in his final match at Welsh-Ryan Arena, fellow seniors Jameson Oster and Garrison White did get the chance to wrestle in their final home meet.

Oster, who was ranked No. 19 in the 141-pound class, struggled in his match, falling to Duke’s unranked Zach Finesilver by a 9-0 major decision. White, on the other hand, gave the Cats a crucial win at 125 to start the meet, giving the team an early 4-0 lead. White went into the third period of his match down by one point but ended up recording an 11-2 major decision over his opponent.

Storniolo gave credit to White for the team’s victory, but the wrestler said he was just trying to enjoy the moment.

“It’s definitely a weird feeling knowing I stepped out there for the last time today,” White said. “But it’s just one of those things you try to put out of your mind and focus on your match, and then after the match just soak up the moment.”

Following the team’s win on Friday, the Cats faltered in Madison losing to Wisconsin (4-8, 3-6 Big Ten) 38-3 in the Big Ten season finale on Sunday. NU struggled early against the Badgers and couldn’t surmount the early deficit.

Despite the team finishing its pair of weekend matches with a loss, Storniolo said it’s a good feeling to be back into the winning column.

“It’s a sign of relief,” Storniolo said. “I think it was a little too close to really enjoy. I still feel like we could have competed a little bit better (Friday), but it feels a whole lot better to come out on the winning side of these close matches than the alternative.”