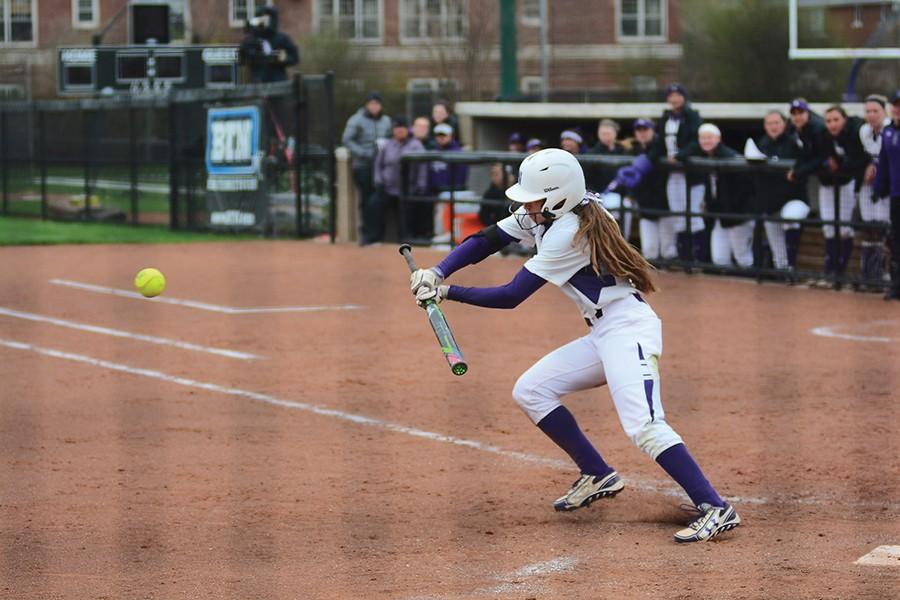 Sabrina Rabin lays down a bunt. The sophomore outfielder hit the first home run of her career in Sunday’s 3-2 loss to Boston College.

In a wild weekend, Northwestern won two and dropped two in the inaugural Big Ten/ACC Challenge.

Led by their bullpen, the Wildcats (5-4) beat both North Carolina (4-6) and Boston College (4-6) once in the series. All four games came down to the wire, with two of the four decided by 1 run.

Even with two losses, the Cats’ bullpen starred in the series, with freshmen pitchers Kaley Winegarner and Kenzie Ellis both getting solid starts. Junior Nicole Bond, who sat out last season due to injury, pitched 4.2 innings over the weekend, giving up four hits total, and senior Amy Letourneau had 13 strikeouts in the series.

In a series controlled by defensive play, NU’s pitching rotation was another bright spots this weekend. On Friday, Letourneau took a no-hitter into the sixth inning before the Tar Heels’ bats came alive to hit three homers in the sixth and seventh innings, resulting in a 5-2 win. Letourneau pitched the entire game and finished with 10 strikeouts.

Winegarner was up next in the rotation for the Cats as they faced Boston College on Saturday morning. Although the Eagles jumped out to a solid 3-0 lead, NU came back strong with freshman outfielder Sabrina Rabin reaching second base and senior shortstop Andrea Filler smashing a double into centerfield to bring her home. Letourneau then hit the 31st home run of her career to give the Cats two more runs.

With NU’s offense finally rolling, Winegarner absolutely dominated the Eagles’ batters, retiring the final 13 batters she faced to give the Cats a close 4-3 win over Boston College.

Saturday’s doubleheader meant NU got to face the Tar Heels one last time. In the bottom of the second inning, juniors Anna Petersen and Alcy Bush hit back-to-back homers to bring the score to 2-0. The Cats went back-to-back once again in the third, with Filler and Letourneau both homering to double the lead. The Cats then scored 2 more runs to give the team a 6-0 lead heading into the fourth.

In the fourth frame, the Tar Heels scored 4 runs to make it a 6-4 game. After Ellis took the mound for the Cats in the fifth, North Carolina scored another run on groundout, bringing the score to 8-6.

However, the Cats weren’t done yet. Bush hit a single into center that scored sophomore Marissa Panko and allowed freshman Morgan Nelson to take the plate. Nelson then hit her second homer and first grand slam of her career, walking the Cats off with an 11-8 win.

After Saturday’s dramatic ending, NU was looking for one more big win to end the weekend against Boston College on Sunday.

Unfortunately, a big third inning left the Cats down early 3-0 against the Eagles and looking to make a comeback. Junior Krista Williams hit a single and stole second at the top of the fourth, followed by a Filler double to right centerfield that brought the deficit to 3-1. In the sixth, Rabin hit her first solo home run over the wall, leaving the Cats only 1 run away from tying it up.

However, NU was not able to get on base in the seventh, even after two perfect innings from Letourneau.

NU will now look ahead to the Mary Nutter Collegiate Classic starting Feb. 26 in Cathedral City, California, where they will face five opponents over three days.