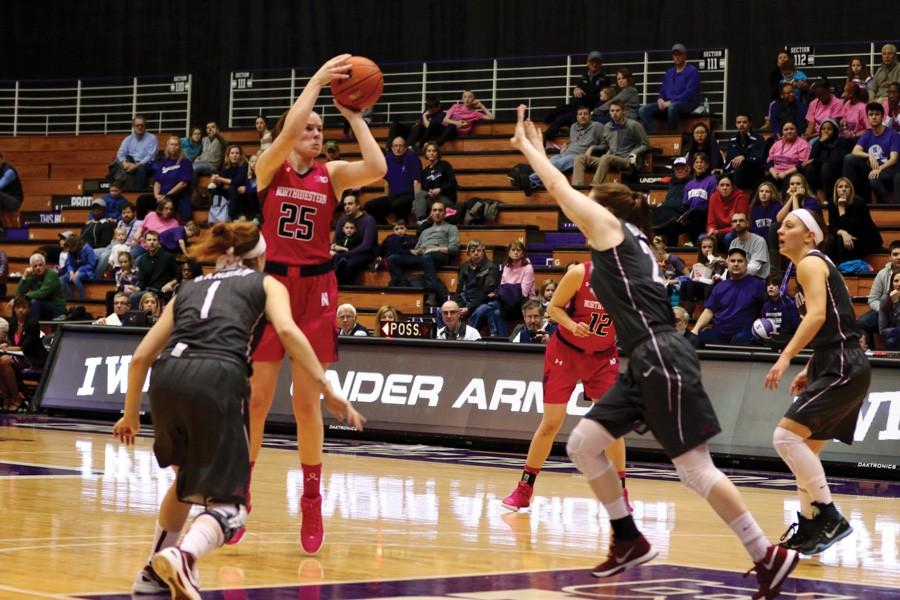 Maggie Lyon takes a jump shot. The senior guard led the Wildcats with 18 points against Wisconsin.

On Saturday, Northwestern did something it hadn’t done in nearly seven weeks: win a game by more than 10 points.

“We’ve played really well,” coach Joe McKeown said. “Today I was just proud that we closed the game out and just got a lot of contributions from different people. It’s a hard place to play (on Wisconsin’s) Senior Day. They’ve had a lot of big wins here.”

The win snapped NU’s 4-game losing streak and at least temporarily ended a 1-9 stretch, albeit against one of the Big Ten’s worst teams. The Badgers have won just once in their past 10 games and fell at home to last-place Illinois on Wednesday.

After leading by 6 at halftime, the Cats pulled away in the third quarter. NU went on a 7-0 run midway through the period and scored 11 points in fewer than four minutes in the third to extend the lead to 15. Wisconsin never drew within single digits after that point.

Junior guard Christen Inman punctuated the 19-point quarter with a jumper just before the buzzer sounded.

“We just came out today with a whole different mentality and just kind of focused on the game at hand and playing as hard as we can on every possession, being really fundamental in everything we do, and I think that really came together today,” senior guard Maggie Lyon said.

Neither team was particularly strong from 3-point range. Lyon made the Cats’ only 3 of the first half midway through the second quarter, and the Badgers did not make one until late in the third quarter.

McKeown said that containing Wisconsin from beyond the arc was critical to the gameplan.

“When you watch them they really play off their threes and it opens them up inside-out,” the coach said. “They have a number of people, so we just tried to make it hard for them to get the ball in those situations. I thought we carried that part out pretty well.”

Although Saturday’s game was the only regular season meeting between the two teams, they could play again in the Big Ten Tournament. After the win, NU sits 12th in the conference standings and Wisconsin is 13th; the teams who finish the regular season in those spots will meet in the first round of the tournament.

McKeown said he believes that the Cats can play well in Indianapolis, noting that NU upset then-No. 5 Ohio State 86-82 in January.

“We’ve played some great games this year and just lost some really tough games,” McKeown said. “I think we’re capable of anything, I really do. I feel like there’s nights we can beat anybody. Sometimes our inexperience hurts us a little bit but that’s why they call it March Madness.”

The Cats will return to action against Michigan on Tuesday. On Saturday, however, Kunaiyi-Akpanah said NU focused on playing together as a team.

“We came together and had a lot of talks about what we needed to be doing differently,” she said. “Rather than playing to look good on the TV or to have all the points, just think about your teammates and who you’re playing for and just play hard for each other.”

This story was updated with postgame quotes.