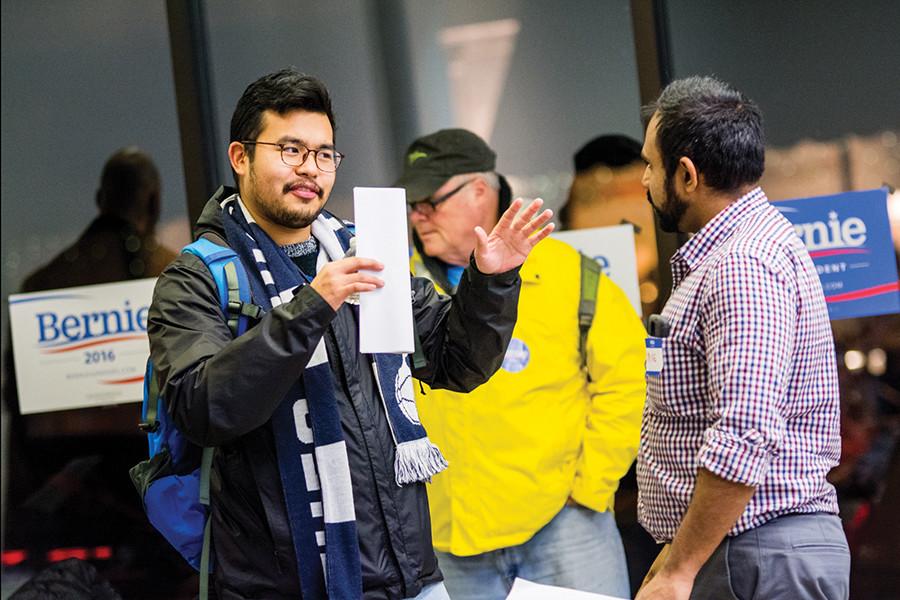 Organizers and supporters for Vermont Sen. Bernie Sanders’ presidential campaign congregate at the opening of the Evanston Field Office Thursday. The field office opened Thursday night and launched volunteer and outreach efforts for the Northshore area.

A new field office for Vermont Sen. Bernie Sanders’ presidential campaign opened Thursday in Evanston, looking to solidify support for the candidate in the North Shore.

Over 50 Chicagoland residents joined members of Sanders’ campaign team for a meet-and-greet with fellow Sanders advocates and a community discussion on how to gather support around the area. The audience ranged from DePaul University students to elderly Evanston residents and even a few Illinois primary election delegates. The event allowed individuals to sign up for shifts at the phone bank and canvassing.

The new office at 516 Dempster St. will serve as a home base and offer many opportunities for followers to improve their outreach, Sanders supporter Michael Goldberg said.

“When we can make connections to other local Bernie supporters is when developments grow,” Goldberg said.

The office is the newest outreach center for Sanders, who recently won the New Hampshire primary and was within half a percent from candidate and former secretary of state Hillary Clinton in the Iowa Caucus. The office will reach out to the entire 9th Congressional District, including Evanston, Skokie, Arlington Heights and parts of north Chicago using posters, flyers and phone calls to sway opinions and rally North Shore residents to Sanders’ cause.

Although Evanston is not the metropolitan city that many would expect to cover the region, its location is one of its greatest advantages, Sanders advocate and 9th District delegate Sharon Sanders said. Northwestern is of particular interest as the office and its volunteers will want to gain support from students, Sharon Sanders added.

“Evanston is a good location that many already come to, and it’s central to the district,” Sharon Sanders said. “We’d love to work with Northwestern and we’re looking to come and speak soon.”

Throughout the town hall-style meeting that celebrated the opening of the office, each visitor and volunteer introduced his or herself and explained why they want to see Sen. Bernie Sanders succeed and ascend to the White House. Several cited their desire for America to return to being a “true democracy,” while others simply said they did not want to see any of the other candidates win the presidency.

Volunteers ran through the agenda for the next three weeks, reinforcing that the hefty amount of work ahead of the campaigners can be accomplished with nearby residents giving their time and effort. Chicagoland resident and artist Diane Thodos suggested that an emphasis on gaining the trust of the youth in surrounding neighborhoods can have a significant impact on the Illinois primary.

“It’s about the youth, their parents and their kids,” Thodos said. “The kids that young Bernie supporters will have will be a part of this movement. The next 30 days will affect the next 30 years.”

By the end of the event, the room was filled with Bernie followers thrilled to start campaigning. The new office will grow advocation throughout the district and the state through its phone calls, Sharon Sanders said, adding it will stop at nothing to show the public what Bernie Sanders stands for.

“We’re trying to get the message out,” Sharon Sanders said. “What’s happening to the country, and how we want to make people aware of the intentional killing off of the middle class and the common worker.”