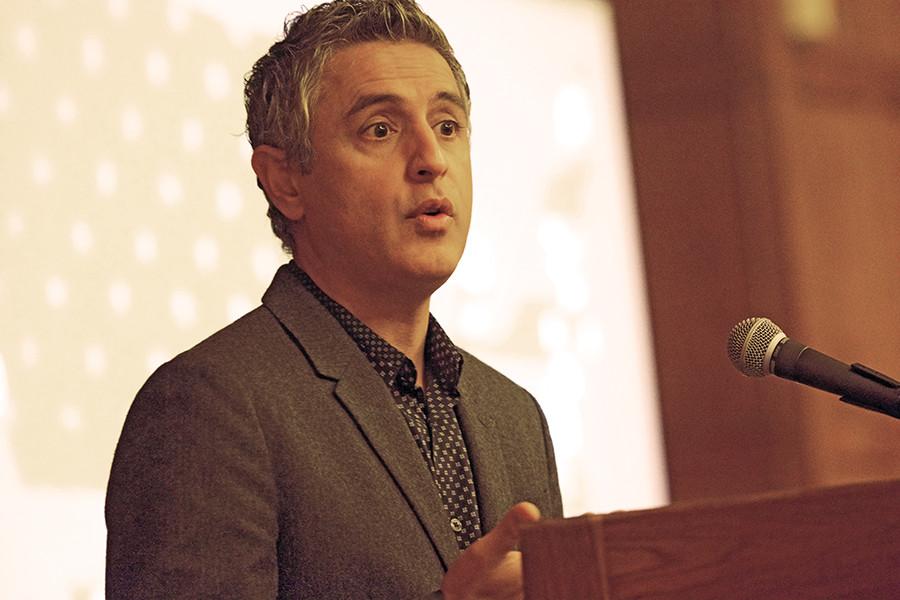 Author Reza Aslan speaks in Lutkin Hall at an event hosted Thursday by the Muslim-cultural Students Association for Discover Islam Week. Aslan discussed Islamophobia and its current rise in the mainstream.

Islamophobia is not a Muslim problem but an American problem, said Reza Aslan at a speech Thursday held by the Northwestern Muslim-cultural Student Association.

“Fear Inc: The Industrializing of Islamophobia,” the keynote address of McSA’s Discover Islam Week, featured Aslan, an author and religious scholar. Aslan presented statistics on the rise of Islamophobic acts in the United States and addressed their origins, with a Q&A moderated by political science Prof. Elizabeth Hurd following his speech. Over 400 people attended the event at Lutkin Hall.

Recently, Islamophobia has been on the rise, Aslan said. Particularly with presidential elections approaching, many candidates are expressing Islamophobic sentiments unimaginable 10 years ago, he said. While 31 percent of Americans held unfavorable views toward Muslims following 9/11, 61 percent do today, Aslan said.

“What’s really fascinating about this unprecedented rise is that it’s not an accident,” Aslan said. “This isn’t the result of home grown fears. It’s actually been a very well coordinated attempt by a very small group (driving) home this message that Muslims are an enemy.”

“Donald Trump is not funny anymore,” Aslan said. “These are not fringe ideas. They are very much in the mainstream … And these words have very clear consequences.”

Conversely, Muslims are among the most law-abiding and peaceful religious groups in the United States, Aslan said. Aslan cited a 2010 Gallup poll that asked participants about the acceptability of the use of violence. In that poll, 78 percent of Muslims said violence is never acceptable, the highest percentage of all religious groups.

“If we are involved in an ideological conflict or war of ideas, then we have at our disposal the greatest weapon in that fight: a Muslim community that is integrated and civil and successful and comfortable in their skin and their Americanness,” Aslan said.

The origin of Islamophobia is not ignorance, Aslan said, but fear. He said to combat Islamophobia, the same methods used to combat past forces of religious intolerance, from anti-Catholic policies to anti-Semitism, must be employed: building relations.

“It requires the slow building of bridges, of the taking down of walls,” Aslan said. “It’s inevitable, but it takes a while.”

Rimsha Ganatra, vice president for public relations for McSA, said they had been planning the event since the end of Fall Quarter. The Weinberg junior said she was happy with how engaged the audience was throughout Aslan’s speech.

“A lot of this (talk) was about meeting a Muslim, getting to know a Muslim, and that’s the point of this whole week as well: just getting Northwestern students to know Muslim students,” Ganatra said.

“I’ve always wanted to hear him in person to articulate his thoughts on Islamophobia,” Shameem said. “I’m an American Muslim so it’s very important to me to educate other people on this issue as well.”