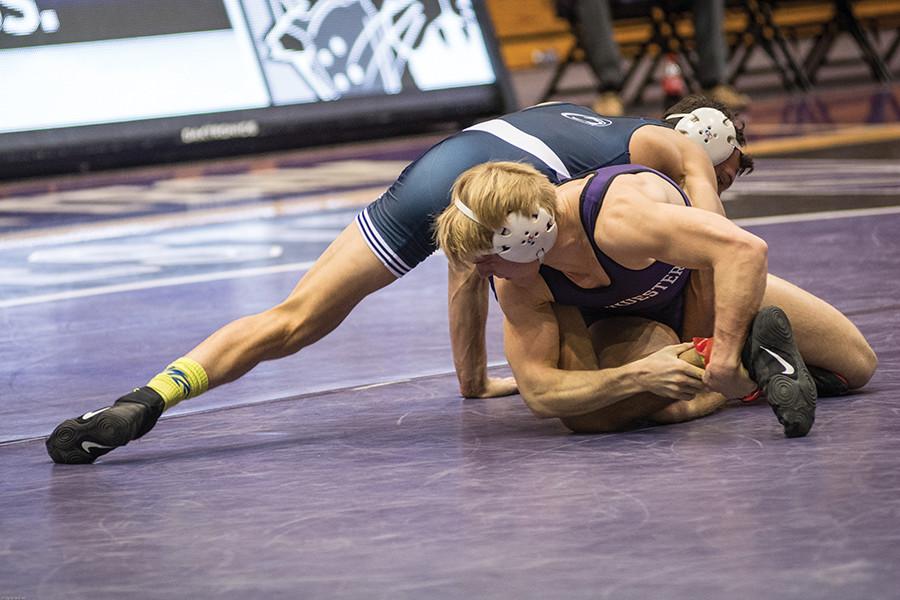 A Northwestern wrestler grabs an opponent’s leg. The Wildcats will host their final home dual of the season Friday against Duke.

The Wildcats wrap up the regular season this weekend with two opponents at or nearing the bottom of their respective conferences. And after a long season replete with devastating injuries and disappointing losses, Northwestern is in position to potentially triple its win total.

The Cats (1-12, 0-8 Big Ten) will hold their senior night against Duke (5-8, 1-4 ACC) on Friday before packing up and going to Madison for a Big Ten regular-season finale against Wisconsin (3-7, 2-6) on Sunday. The Blue Devils currently sit in last place in the six-team ACC, while the Badgers are only three spots ahead of last-place NU in the Big Ten.

Interim coach Matt Storniolo hasn’t been able to celebrate a win with his team since Nov. 29, and after a long, winless stretch of nearly three months, the first-year coach said he is ready to taste victory again.

“It would be really nice to end the season with a win here in a dual meet, or maybe even two,” Storniolo said. “The guys have been working their tails off, and individual success is nice, but it would be great to have a team success here at the end of the year.”

Friday’s match against Duke will be the last time seniors Garrison White, Dominick Malone and Jameson Oster wrestle in a dual at Welsh-Ryan Arena.

This has been an unusual season for the Cats’ seniors, who are accustomed to more winning seasons. NU is in the midst of its worst losing streak since 2003, and this season will be the first losing season the seniors will experience. However, the team’s three seniors are among the few wrestlers on the roster who are currently performing well in their matches.

Both Malone and Oster are going into the weekend ranked No. 19 in their respective weight classes, and White is currently tied for 10th in the NCAA in tech falls, recording five. Malone is also seventh in the country in pins with eight, but the senior said his recent success doesn’t overshadow the emotions associated with his last match.

“I guess it’s bitter-sweet, it’s kind of a cliche answer but it’s true,” Malone said. “Four years here goes by super quickly and it’s good and bad. I’m ready to move on but at the same time I’m going to really miss everybody.”

The Cats are coming off of their 11th-straight loss, after losing to Nebraska last weekend 39-6. In the loss, Oster recorded the only points for the team, pinning his opponent in 3 minutes and 54 seconds.

Since returning from his injury, Oster has excelled for NU and beat three out of his four opponents, including Nebraska’s then-No.19 wrestler Anthony Abidin in the 141-pound class.

“It’s a little different feeling, it’s kind of weird how time has gone by,” Oster said. “It’s been a fast five years, but I have to put that behind me and just focus on my match.”

Storniolo said he will be sad to see the seniors depart from NU, but has enjoyed watching the wrestlers develop in his time at NU.

“Senior night is always a bitter-sweet thing,” Storniolo said. “It’s great to honor these guys and they definitely deserve it, but it sucks seeing them go. Each one of these guys has grown tremendously as a person, a wrestler and a student in their four or five years here.”