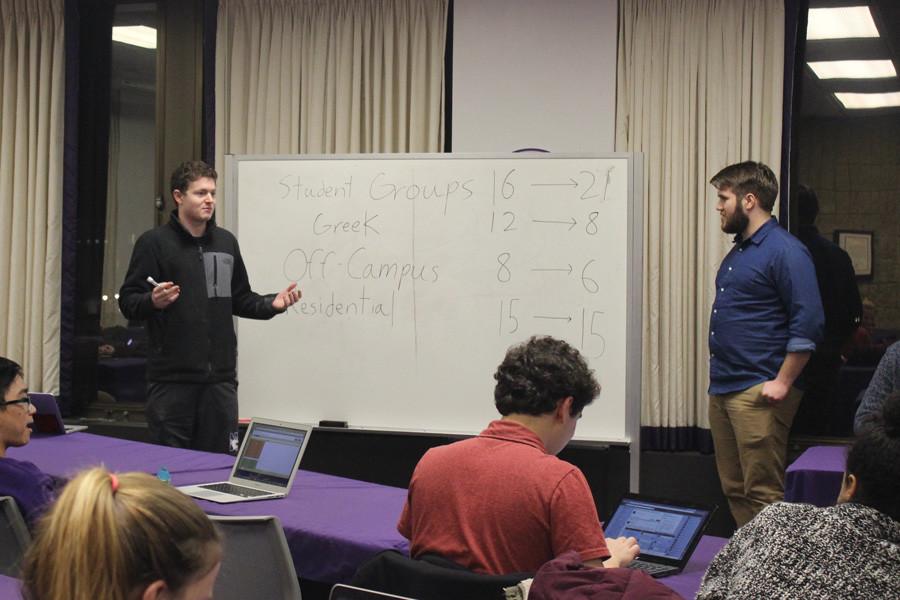 The legislation, which needed two-thirds majority to pass, proposed increasing student group representation by six seats to include 21 total, which would have matched demand when ASG received 21 applications for 15 student group seats last year, co-author Erik Baker said. Off-campus representation would have decreased from eight to six senators to incentivize competition for seats, and all Greek councils would receive two senators each to represent organizations equally, the Weinberg senior added.

The invalid vote was voided because it had no name. An open forum was held before Senate to allow students to learn more about the legislation and voice concerns.

Currently, Interfraternity Council and Panhellenic Association each receive five senators while Multicultural Greek Council and National Pan-Hellenic Council each have one.

Adding a senator to MGC and NPHC would increase the voices of people of color in Senate, said For Members Only senator Gwendolyn Gissendanner during the forum.

“Our current Senate is incredibly inefficient,” the SESP sophomore said. “The idea that we have to come in here and beg for certain seats and there’s all these vacancies while at the same time student groups are banging down the door — on top of that, we’re not even thinking about the groups who feel so marginalized that they don’t even want to apply.”

Weinberg sophomore Brandon Arias, who stayed for both the forum and Senate, said he came to Senate to represent himself as a member of Omega Delta Phi fraternity and others in MGC.

“I felt it was an obligation for myself and everybody else who identify to be marginalized students,” Arias told The Daily. “I feel that it was my obligation to represent the voices that could not be spoken for tonight.”

Amendments to the proposed legislation were introduced but failed to pass. Off-campus senator Will Pritzker said he was not in favor of the legislation because the proposed representation would not be proportional to the distribution of students among the four Greek councils.

“The structure of Senate is, by my opinion, wrong and this jumps the gun on changing it in a way that, while it seems makes it better, makes it less representative under the current system,” the Weinberg junior said before senators voted.

ASG president Noah Star acknowledged that Senate reform has failed several times while he has been in ASG, but he wished to see change.

“We’ve all acknowledged that the way we do representation now is problematic,” the Weinberg senior said after the legislation failed. “Things have been bad, and we could have made them better tonight, and I’m quite frankly disappointed that we didn’t. We need to do a better job, regardless of where you fall on this, on actually talking to our constituents.”

After the nearly two-hour debate and discussion on representation reform, ASG unanimously passed legislation showing support for the creation of a wellness and relaxation room in the new student center.

Legislation was also introduced to allow ASG funding to cover food expenses if essential to a student group’s event, which will be voted on next week.