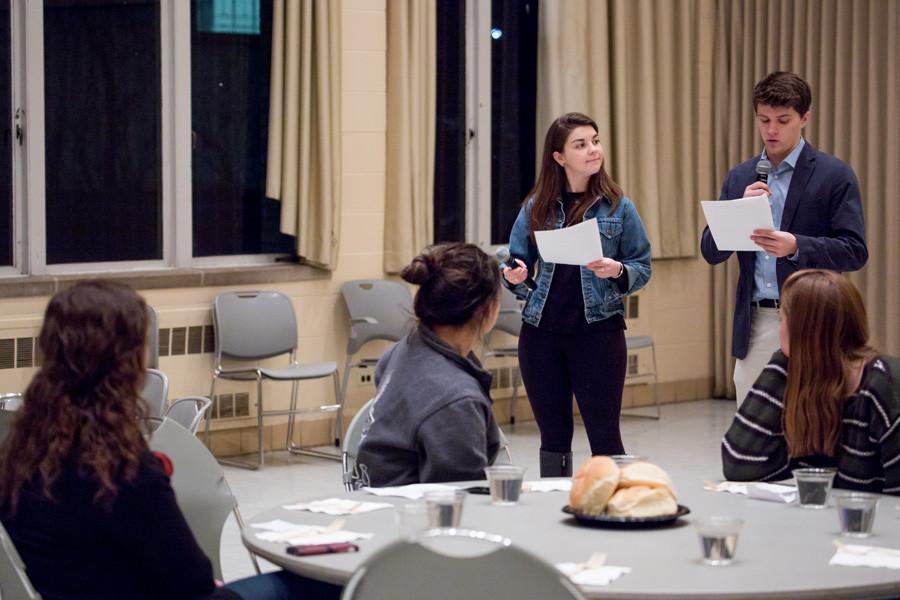 Weinberg senior Brad McCandless (right) and SESP junior Sarah Thompson host a “hunger banquet” in Parkes Hall on Wednesday night. The 2016 Dance Marathon emcees led a presentation on the effects of hunger and poverty around the world.

Students were handed cards that determined their socioeconomic class — low income, middle income or high income — and the type of meal they received at a “hunger banquet” Wednesday night.

About 30 students gathered in Parkes Hall for a dinner and discussion about hunger and poverty sponsored by Dance Marathon and the Northwestern University Community for Human Rights, along with the Buffett Institute for Global Studies. The event was hosted by DM 2016’s emcees, Weinberg senior Brad McCandless and SESP junior Sarah Thompson.

“You may think hunger is about too many people and too little food,” McCandless said during the event. “That is not the case. Our rich and bountiful planet produces enough food to feed every woman, man and child on earth.”

Thompson said the reason for hunger is because of an imbalance in power and resources.

“Hunger is about power,” she said. “Its roots lie in inequalities in access to resources. The results are illiteracy, poverty, war and the inability of families to grow or buy food.”

After the emcees’ presentation, attendees had their meals, which ranged from only rice and water to bread and pasta, before breaking up into small groups for discussion. Discussion topics ranged from the statistics shared throughout the night to examples of experiencing poverty in the U.S. and abroad.

“It was a powerful event,” Justin Marquez, one of DM’s community engagement chairs, told The Daily after the event. “Hearing (attendees’) different takeaways … demonstrated to me people were not just engaging with this event, but they’re learning. These are experiences people can take outside of the room.”

The Weinberg senior said DM collaborated with NUCHR to bring an international perspective to the issues of hunger and food insecurity, because Blessings in a Backpack, DM’s primary beneficiary which works to provide food for elementary school children on the weekends, only operates in the U.S.

Jacqueline Soria, a SESP senior who was assigned to the high-income group, said the layout of the event helped her visualize statistics she had learned about hunger and food insecurity in the past.

“Us actually stepping into people’s shoes and representing them for a moment and realizing just 20 percent of the world population has above $6,000 and can live and eat comfortably was really striking to me,” she said.

NUCHR programming co-chair Tara Mittelberg said she had past experience planning hunger banquets and hoped this event would draw attention to unequal access to food, a major human rights issue.

“We live in unfortunately very separate worlds,” the Weinberg junior said. “I hope this just provided people an opportunity to at least think about inequality a little more.”