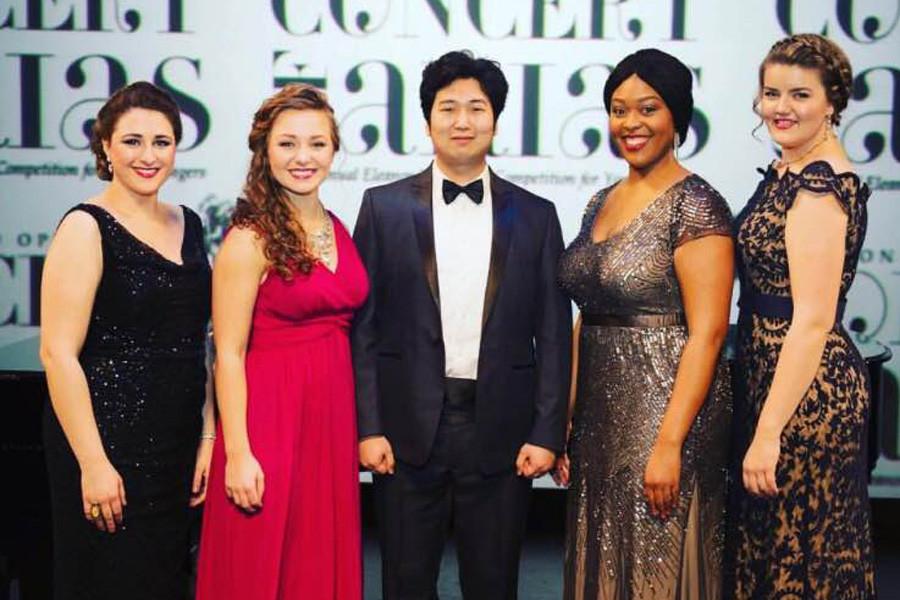 Bienen graduate student Madison Leonard (second from left) stands with other contestants at the Houston Grand Opera’s 28th annual Eleanor McCollum Competition. She won first place in the competition after advancing as one of eight finalists to the final round.

After trying the piano, cello and guitar as a child, Bienen graduate student Madison Leonard decided to use a different medium to create music in college — her voice.

Leonard graduated with a major in vocal performance from Pepperdine University and decided to continue studying voice and opera at Northwestern. This month, Leonard won first place and took home a $10,000 prize in the Houston Grand Opera’s 28th annual Eleanor McCollum Competition.

“When they called my name, my mouth flew open,” Leonard said. “I was just completely floored. I feel very privileged that I got first place and I was kind of on cloud nine the rest of the night.”

Leonard traveled to Houston in the fall along with nearly 500 other singers to audition for the preliminary round of the competition, which serves as a recruitment tool for the Houston Grand Opera Studio, one of the most prestigious young artist programs in the country. Young artist programs are designed specifically for people who are on the track to becoming professional singers.

Leonard was one of 14 semifinalists invited back in January. The semifinalist group included singers from the Ukraine, South Africa and South Korea.

For the competition’s second round, Leonard said she went to Houston with six pieces prepared. She added throughout the week that she practiced them with Houston Grand Opera staff members. From there, the coaches selected two French arias for Leonard to sing in the final round: “Je suis encor” and “Emily’s Aria.”

Leonard was selected as one of eight singers for the final round, and then named the first place winner on Feb. 4.

She said she is honored that she got first place out of the group of singers at the competition and said she has had a passion for opera since her teacher at Pepperdine introduced her.

“The sounds were so different than anything I had ever listened to, and it really blew my mind,” Leonard said. “From that point really, I knew it was what I wanted to do. Opera for me, combined so many different interests. I love learning languages and history, traveling and drama. It’s just definitely the art form for me.”

While Leonard was in Houston, she also had the opportunity to attend rehearsals with the Houston Grand Opera staff, tour the opera house and see several mainstage performances, she said.

Bienen Prof. Karen Brunssen, Leonard’s voice teacher, said she was thrilled when she heard about Leonard’s first place finish. Brunssen, who has been working with Leonard since fall 2014, said Leonard’s voice has a warm quality to it that makes it endearing for people to listen to.

“Madison has a really beautiful soprano quality,” Brunssen said. “The countenance she has when she sings, even if she’s doing warmups, just draws your attention to her. It’s really beautiful.”

Bienen graduate student Nathan Ward, who is in Leonard’s voice studio at NU, added that Leonard is very expressive with her body and face when she sings. He said on stage, she has a strong balance of energy and stability.

He added that because singers mature over a long period of time, Leonard has talent that is already evident and powerful, but her voice is also constantly changing.

“I’ve been able to see her respond to this constant challenge of being presented with something that you can’t do yet,” Ward said, “and then working to do it without cheating it in any way.”

Leonard said she has auditioned for several young artist programs this year, and she plans to audition for a few more programs in the spring. For Leonard, entering one of these programs would be the next stage in her career, she said.

“The regular kind of class load and participation in the operas (at Northwestern) have prepared me really well for these kinds of experiences,” Leonard said. “I’m getting up, preparing new music and singing it for my classmates and teacher every week.”