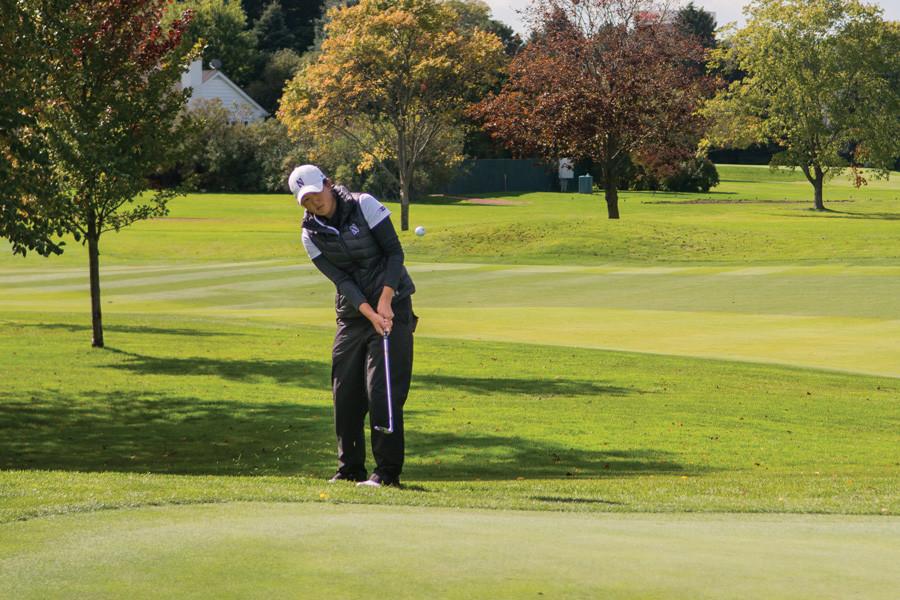 Kaitlin Park chips from the fairway. The senior is a two-time All-Big Ten first team selection.

Northwestern is heading into the spring looking to build on last year’s historic season.

The Wildcats’ 10th place result in the NCAA Championships was a team record in NU’s third straight trip to the national tournament. After taking second place at the regional tournament in Raleigh, North Carolina, to advance to the finals, the Cats came up two spots short of making the final eight-team match play tournament that determined a champion.

In 2016, the team is looking to go even further, and they open the spring season ranked No. 6 in the country.

However, junior Kacie Komoto said she is simply looking to build her game one tournament at a time.

“Personally, I think it would be nice to start on a good note,” Komoto said. “It will kind of help me transition all the way to Miami and then even into the spring. I’m excited; I think my game is to a point where I can play well, so I’m excited to see what I can do.”

Although the spring season is just beginning, NU played four tournaments in the fall, taking second in the first two before winning the third — the Windy City Classic in Wilmette.

Komoto led the Cats in the latter, tying for fourth place overall, resulting in one of a slew of individual top-5 performances from NU in the fall which were highlighted by sophomore Sarah Cho’s victory in the Dick McGuire Invitational in New Mexico.

Much like Komoto, however, Cho is just looking to improve her game.

Cho and Komoto aren’t the only ones dropping top-5 finishes for the Cats. Sophomore and reigning Big Ten Player of the Year Hannah Kim, tied for third in New Mexico and also tied for fourth at the Stanford Intercollegiate where NU took fourth overall in a field that included three of the top four teams in the country.

But the depth doesn’t end there for the Cats, as freshman Stephanie Lau shot 10 under par to take third at the Mason Rudolph Championship in Tennessee.

Following these impressive performances in the fall, the team has been hard at work throughout the winter, and coach Emily Fletcher said she has noticed improvements up and down the lineup.

“They’ve really all had individual things that they’re attacking and trying to get better at,” Fletcher said. “Steph’s done a lot of work on her putting fundamentals, and she’s really come a long way on that. Hannah Kim’s been focusing a lot on her pitching and chipping. We’ve broken it down; coach [Pat] Goss has worked with her a little bit on some basics.”

These improvements will be put to the test against some of the best teams in the country right out of the gate as NU faces three top-10 teams at the Lady Puerto Rico Classic before heading to the Hurricane Invitational where they will attempt to defend the title they won last year.

However, the ultimate goal hasn’t changed since last year. NU is looking to build off their 10th place finish and grab one of those top eight spots and a chance at the NCAA title.

“Really this gives us a time to work on our technique, see how we’re doing and I’m doing myself,” Komoto said. “We can expect pretty good things from us coming up.”