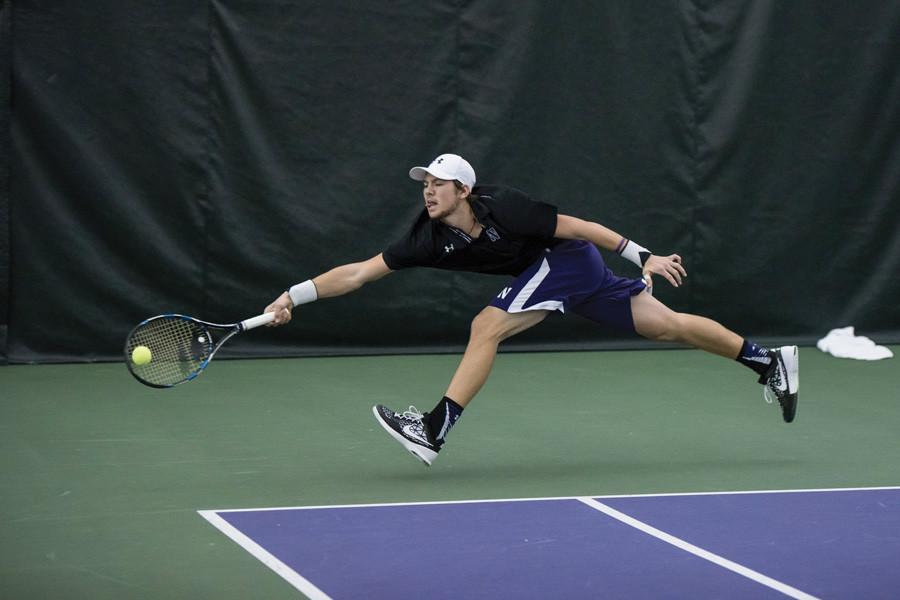 Alp Horoz lunges for the ball. With the outdoor season rapidly approaching, Northwestern is positioned well in the top 25.

Northwestern has set lofty goals the past few years, but with its performance early this season, the team is proving that a Big Ten title and a run in the NCAA Tournament are within reach.

With much of last year’s roster returning, the No. 21 Wildcats are hoping their increased experience and a focus on player development will put the program over the top this year. From the beginning of the year, the team’s primary goal has been to win the Big Ten Championship, a feat the Cats have not accomplished since 1990.

However, the Big Ten will be difficult to conquer this year as NU has No. 8 Ohio State, No. 12 Illinois and No. 23 Minnesota standing in its way.

“Our main goal is probably winning a Big Ten title, obviously there’s a lot of good teams in the Big Ten Conference, but I think we have a good shot,” junior Konrad Zieba said. “We’re all playing well. We’ve got a lot of momentum.”

That momentum has propelled the Cats to an 8-1 start to the season, with seven of those victories coming over top-60 teams.

One of the defining aspects of this year’s team is its continuity. The only singles player from last season that departed was Logan Staggs, who transferred to UCLA. Staggs was replaced in the singles lineup by freshman standout Ben Vandixhorn, who has compiled a 4-1 record in singles matches this winter, primarily at the No. 6 spot.

Outside of Vandixhorn, all six of the other singles and doubles starters are upperclassmen who started last year. With much of the talent in place from 2015, NU has focused on player development and improving its mentality in order to achieve its lofty goals.

For coach Arvid Swan, that means teaching his players to be able to make the correct decision out on the court.

“(You have to) know when to come in (toward the net), know when to stay back,” Swan said. “That’s something that in college you have to learn because the players are so much better than they are in the juniors.”

One player that has shown dramatic improvement already this year is Zieba, who finished last season unranked and playing third singles. This year, he has risen to the No. 1 singles spot and is currently ranked No. 14 in the country.

“We have been developing what I would call a relentless attitude, and being able to win and being confident in ourselves,” Horoz said. “It’s just the relentless winning attitude we have to bring to practice and matches.”

With new no-advantage scoring rules in place this year, entire matches can hinge on a handful of points. Horoz said this year the team is ready to step up and turn close losses into wins, something the Cats struggled with last year.

“Every year this tennis program has been getting better, and every year we’ve been close to winning a Big Ten Championship and being top-15, top-10 in the country,” Horoz said. “But I think we’re even closer now, and I think we all feel that we can do it and it’s really exciting to be a part of that.”