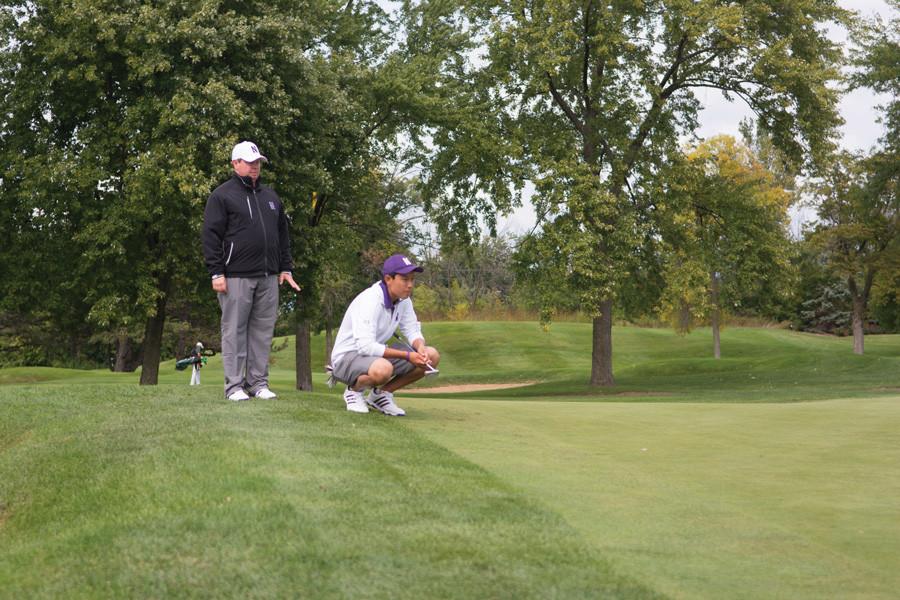 Dylan Wu ponders his next shot. The sophomore was a standout last season, leading the Wildcats in scoring average.

The Big Ten may possess several of the nation’s premier collegiate golf programs, but some of Northwestern’s most intense competition this season may be among its own team.

Players and coaches alike have repeatedly emphasized the depth of the Wildcats’ 2016 roster, which coach David Inglis believes contains eight players ready to contribute this spring. Yet with a limit of five golfers per competition, Inglis is likely to be faced with some tough decisions as the heart of NU’s stroke play season fast approaches.

“It’s definitely a good problem to have, but we really do feel like all eight guys are capable of helping us succeed, which means sometimes you are going to have to make some difficult calls,” Inglis said. “That’s something we’ve talked about with them, and we want to see them pushing each other and making each other better every day in practice.”

After an up-and-down fall that saw the Cats post a pair of top-three showings at the Windon Memorial and UNCG Bridgestone Invitational, the spring season got off to a fast start with a runner-up finish at the Big Ten Match Play Championships last weekend. NU narrowly lost after being edged out in the championship match against a Michigan State team that it beat a day earlier.

Still, the strong performance has left the team feeling confident heading into a stretch of several important tournaments.

“It’s always a good feeling to get your season off to a fast start, especially when it’s against some of your Big Ten rivals,” senior Josh Jamieson said. “We all came out of that feeling pretty excited about what’s in store for us over these next few weeks.”

The result was even more impressive considering the Cats were without their best player in sophomore Dylan Wu, who represented NU alongside alumnus and former world No. 1 Luke Donald at the Northern Trust Open Collegiate Showcase in California. Wu is coming off a freshman season in which he established himself as a top conference golfer after coming within a single shot of earning a coveted individual berth in the NCAA Division I Championship.

Wu will team with seniors Jamieson and Andrew Whalen as well as graduate transfer Harley Abrams to form a talented and experienced core. In particular, Whalen’s return from a redshirt year could prove to be critical to the team’s prospects this season.

“Getting Dylan back will obviously be big for us, and if those other guys are playing the way we know they can it’s going to be exciting to watch,” Inglis said. “Especially with Andrew coming back this year and the way his game has improved so much, that’s something that is going to be key to our success.”

Yet those experienced players are likely to compete for playing time by the team’s younger members in sophomore Sam Triplett and freshmen Luke Miller, Pete Griffith, and Ryan Lumsden. Jamieson believes this internal competition will only serve the team well going forward.

“Every one of those guys is a really, really good golfer, and they’re all capable of going out and helping us win in any given week,” Jamieson said.  “Coach has talked a lot about us working to get ‘one percent better’ every single day, and the fact that the young guys have outplayed the older ones at different points has helped everyone focus even more on doing that.”

Inglis, for one, can be counted among those who believe the Cats possess potential to make significant waves this season, not only in the Big Ten, but nationally as well.

“What I think what we showed in the match play event is that when it’s our day, we can be as good as anyone out there,” Inglis said.  “If we go out and play the way we can, this team is certainly capable of competing for a Big Ten championship, of making the national tournament, being one of those teams with a chance at a match play spot.”