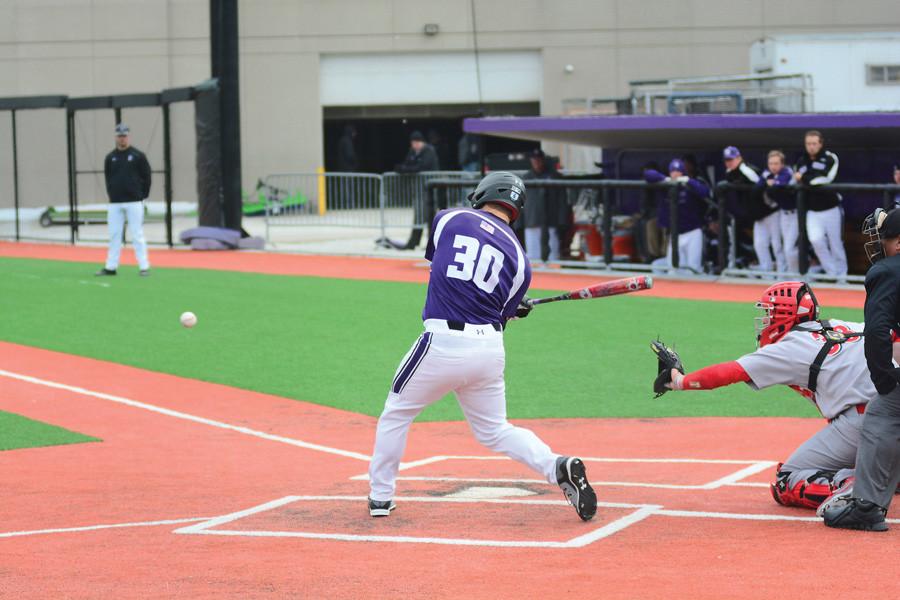 Joe Hoscheit takes a hack at the ball. The junior started all 54 games for the Wildcats last year.

Northwestern has a new sheriff in town.

Former Illinois assistant coach Spencer Allen took the Wildcats’ reins following the retirement of longtime manager Paul Stevens at the end of last season, and so far it’s clear from the way Allen carries himself in the clubhouse that he is extremely eager for the season to begin. While it’s still early, Allen is enjoying his first solo head coaching gig but also recognizes that he is coming into a situation that had seen little change over during the past three decades.

“I’ve really tried to stay true to myself,” Allen said about leading a program for the first time. “There’s times when you have to make tough decisions, and ultimately I get the win-loss record … but our veteran players have been great in this transition.”

Allen said he will lean on some of those veterans as he is taking over a team that won just one out of every three games in 2015 and finished tenth in the 13-team Big Ten. (Wisconsin has not had a baseball program since 1991).

One such veteran, senior pitcher Reed Mason, is expected to front NU’s pitching staff in 2016 after Brandon Magallones and Matt Portland were drafted in June. Mason said he hasn’t noticed much of a difference between the coaching styles and personalities of Allen and Stevens.

“They’re both good people to be around,” Mason said. “There’s a lot of excitement that comes with (coach Allen’s) age and the rest of the coaching staff — all young guys who just love to be here and are in a great opportunity to bring a program up from a steady state.”

For Allen, a former Iowa State captain, the transition from assistant to head coach, he said, has been smooth. Before working with the Fighting Illini last season, Allen bounced around coaching staffs, working for Iowa, Purdue and Washington State, in addition to multiple stops at Creighton. He also worked for the MLB’s Detroit Tigers and Kansas City Royals as a scout.

Everywhere Allen has coached, offense has been the name of his game. But he will have a lot of work to do with an NU team that scored the fewest runs in the Big Ten a season ago.

Allen’s hitting background doesn’t mean he is completely disregarding his pitchers. One of his first missions as head coach was to overhaul the coaching staff with instructors who have proven track records.

Josh Reynolds, the Cats’ new pitching and associate head coach, is just that. Over the past five years as pitching coach at Kansas State, Reynolds helped lead those Wildcats to a 2013 Big XII Championship after his pitching staff posted the program’s lowest ERA in over 35 years.

Reynolds said that he wants NU to eventually establish itself as a regional force, and that the best way is to pound the strike zone.

“Sometimes as pitchers, and I was one myself, we get caught up in trying to trick the hitters,” Reynolds said. “But we want them to swing the bat because hitting is hard to do, and to get (our) guys to understand what they’re good at.”

The Cats are still a ways away from overwhelming success, and there remains work to do both on the field and off. No matter what hardships the team may face, players said camaraderie is strong and appears to only be growing under Allen.

“It’s been great — the wheels have been moving and we’re starting to really gel as a team,” Mason said.