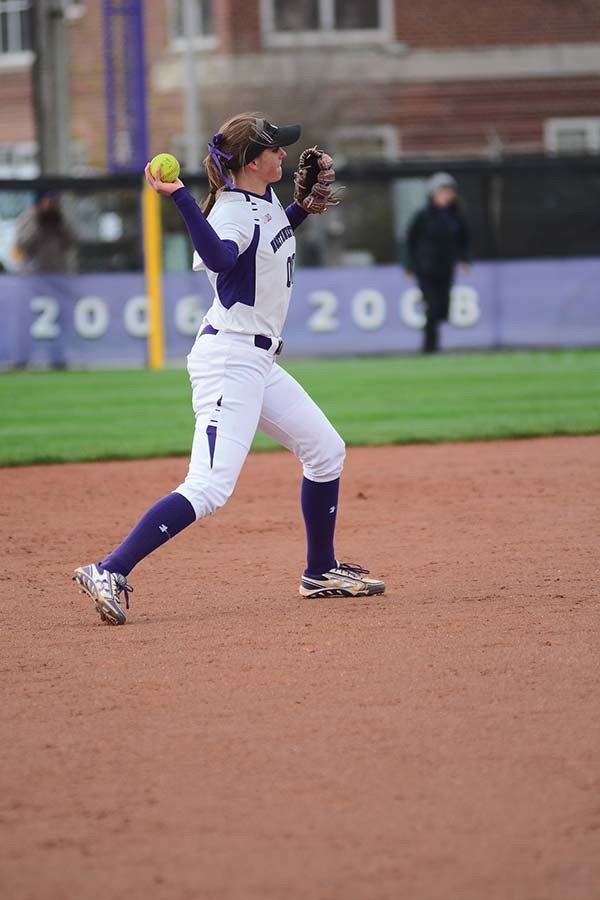 Andrea Filler throws the ball to first base. The senior shortstop paced the Cats’ offense over the weekend, hitting to a .563 batting average.

It’s only been one week and Northwestern has already shattered three program records.

The Wildcats (3-2) opened their season in Tempe, Arizona at the Kajikawa Classic, taking on five teams in three days. NU faced both No. 6 Oregon and No. 8 Tennessee during the series, but the most exciting plays happened Friday, when the Cats’ bats were on fire inning after inning.

NU began the tournament against UC Riverside, coming out with an early 2-0 lead after a Sammy Nettling line drive to left field. The Cats scored 13 runs in the second and third innings, winning on the mercy rule, 15-3, after five innings. Senior shortstop Andrea Filler led the team with 6 RBI, three runs and two homers.

Friday’s second game was record-breaking, with NU scoring 22 runs over five innings and defeating Virginia in five frames. The Cats broke school marks for runs in a single frame with 14 in the fifth, overall runs in a game and overall hits in a game with 21. Filler continued her hot start, with 2 runs and 2 RBI, and had an arsenal of offensive support as senior Amy Letourneau hit her 30th career home run to left center field.

Coach Kate Drohan said the team’s versatility across the field was one of the series highlights this weekend.

“It’s been a big point of emphasis to really utilize everyone’s strengths,” Drohan said. “Each of our players are stepping up with the roles that we ask of them.”

After two big wins, the Cats went into Saturday’s game against No. 8 Tennessee with confidence, but four errors over two frames left NU behind 4 runs. A single by sophomore centerfielder Sabrina Rabin and a two-run homer by Filler cut the deficit to two after three innings, but the Volunteers scored three runs in the fifth inning to make the score 8-2. The game ended with no runs scored by NU in the sixth or seventh innings.

Sunday started out with an 8-4 win over Bradley as Filler continued to rake, going 2-for-3 with 3 RBIs and 2 runs scored. Freshman Kaley Winegarner made her first career start, giving up four runs on five hits, no walks and a strikeout.

Letourneau, who pitched in three appearances with two wins during the series, said the finally-healthy rotation of pitchers has to continue to step up defensively in order to win consistently.

“As a pitching staff, we have to have more confidence and attack the zone more,” Letourneau said. “We have to stick with our plan; if we can stick to it, we’re going to have more success.”

The Cats were able to strike first in the second half of Sunday’s doubleheader, scoring three runs in the fourth inning, but their effort was not enough to stop No. 6 Oregon, who scored nine runs in the fourth and fifth innings. Although NU started out strong, Oregon’s ace closer Cheridan Hawkins kept the Cats’ bats at bay after the fourth, and NU was not able to score additional runs through the last three frames.

Filler capped a .563 weekend, in which she led the Cats at the plate, with two doubles, a triple, three home runs and 13 RBIs throughout all five games.

Although Drohan was happy with her team’s offensive performance, both her and Letourneau stressed the need to make adjustments looking forward to next weekend’s Big Ten/ACC Challenge.

“Defensively is the biggest area where we need to improve,” Drohan said. “We’ll really challenge the team in practice this week and look toward to the next one.”