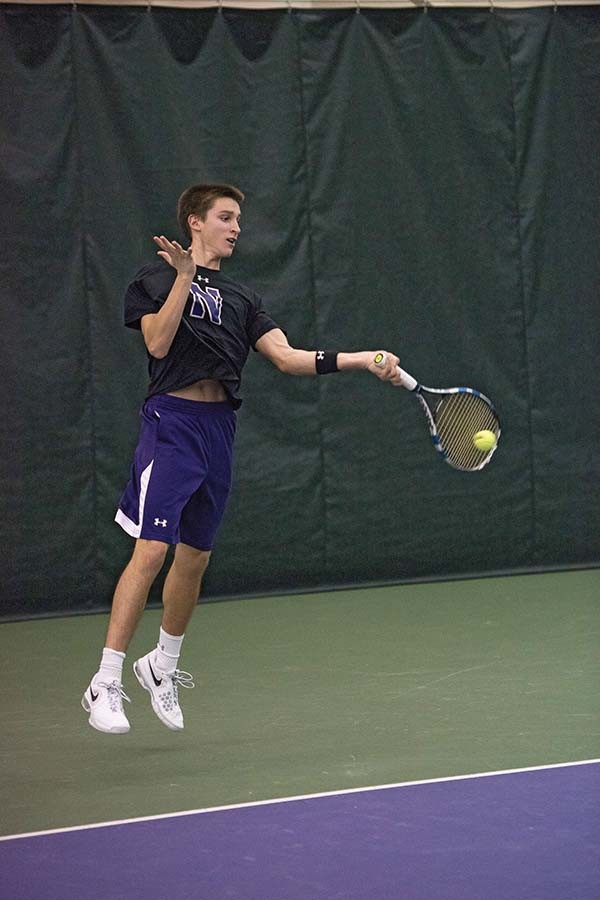 Ben Vandixhorn leaps on a forehand. The freshman has succeeded so far this season, solidifying the back end of Northwestern’s singles lineup.

A weekend battle of Wildcats came up in favor of the purple and white.

No. 21 Northwestern (8-1) pushed its win streak to five on Saturday, defeating Kentucky 6-1, but the score hardly indicated how close the match truly was. With the Cats up 3-1, the three remaining singles matches were each close late in their respective third sets, leaving the whole match up for grabs.

“You gotta trust your players,” coach Arvid Swan said. “You gotta do the work and whatever happens, happens.”

What happened was NU won each of the remaining matches, with junior Alp Horoz clinching the victory for the Cats by winning at No. 5 singles.

The result of Horoz’s match was in doubt for much of the day, as he won only two games in the first set against Kentucky’s Trey Yates before battling back to win the match 2-6, 6-3, 6-4.

Facing triple set point at the end of the second set, a clearly frustrated Yates launched a forehand that looked closer to hitting the crowd above the court at Combe Tennis Center than landing anywhere inside the lines.

Horoz and Yates battled in a tightly contested third set, but Horoz broke Yates’s serve to take a 5-4 lead. The Istanbul native then held his own serve to clinch the victory, finishing the match off with a scorching backhand down the line for a winner.

The raucous crowd was backing Horoz all day, and Horoz said the fans had a significant effect on Yates’s play.

“I thought they were probably the difference in the match today,” Horoz said. “They helped me out a lot, and I’m sure the other guys felt it, too, so we would like that to keep going on for the rest of the season.”

Although Horoz’s match was one of three tightly contested singles matches on the day, NU’s first two singles were won in business-like performances from freshman Ben Vandixhorn, who won 6-3, 6-3 at No. 6 singles, and junior Konrad Zieba, whose 6-4, 6-2 victory at No. 1 singles put the Cats up 3-1.

Zieba, No. 14 in the nation, took down Kentucky’s only ranked player, No. 25 William Bushamuka, in a flurry of perfectly placed shots and seemingly impossible returns.

“I knew he was a big hitter, so I just wanted to stay in points and make him hit good shots,” Zieba said. “Consistency was really my gameplan.”

The lone Kentucky win came at No. 2 singles, where Ryotaro Matsumura defeated Sam Shropshire 7-5, 6-2. Swan came away from the match impressed with the team’s performance up and down the lineup.

“We’re competitive in every spot,” Swan said. “Every single spot, you have to come and beat us, and it has been pretty consistent with that all year. We need to maintain that. We need to come out and be ready to play in every spot, and if we do that we’re a pretty good team.”