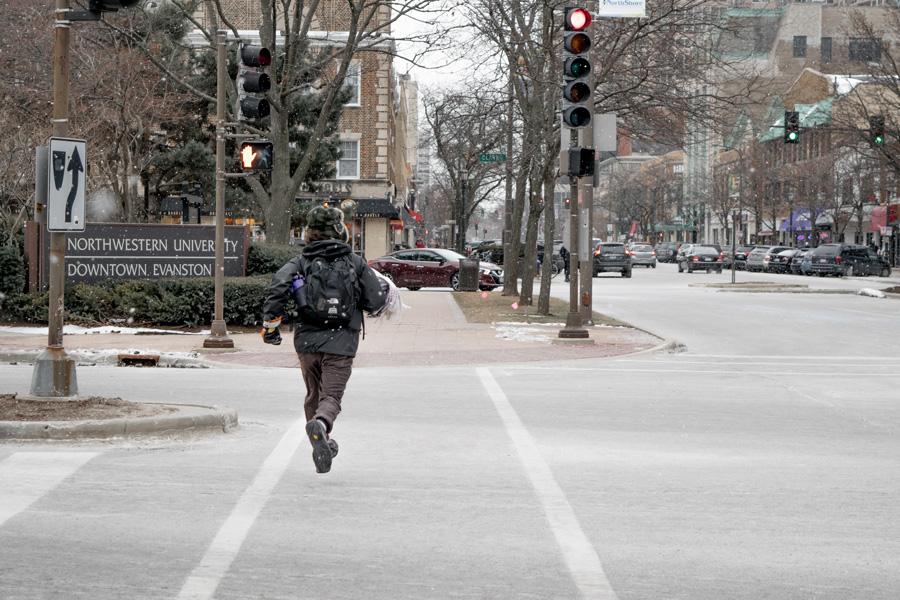 A man jogs against a red light down Sherman Avenue toward downtown Evanston. The 1st Ward encompasses much of the city’s downtown area, and is nestled just to the south and west of Northwestern University. (Lauren Duquette/Daily Senior Staffer)

A man jogs against a red light down Sherman Avenue toward downtown Evanston. The 1st Ward encompasses much of the city’s downtown area, and is nestled just to the south and west of Northwestern University.

Fifty years ago, when former Mayor Jay Lytle moved to Evanston, the downtown area resembled a ghost town. Empty department stores lined the streets, foreclosed signs stuck out of the ground and Lytle said you could shoot a cannon in the early hours of morning without bothering a soul.

That same area today could not be more different. Downtown Evanston, which falls largely within the 1st Ward, hosts more than 3,000 businesses totaling more than $1 billion in annual retail expenditure. Local residents recognize the ward for its eclectic boutiques and booming restaurant scene but said they feel new development that has begun to bleed into surrounding neighborhoods could ultimately overtake the district.

Facing high-rise buildings and business expansion, the 1st Ward — bordered to the east by Northwestern and to the west partly by Sherman Avenue — has struggled to keep some of its old-time charm and what residents describe as the essence of Evanston.

“If you talk to people about what brings them to Evanston, it’s diversity, architecture, neighborhoods and downtown,” Ald. Judy Fiske (1st) said. “It’s really important in the community that we not lose sight of the unique small niche businesses that give a lot of character to Evanston.”

Make new, but keep the old

Signs of progress are nearly everywhere in Evanston. From the proposed complex development at 831 Emerson St. to modernization efforts by the public library, residents said change seems apparent at every corner of the ward — and with it, the risk of over-development.

In the past 10 years there have been numerous developments in the 1st Ward, including new retailers, a housing project renovation and proposed high-rise construction. The growth has brought new business to the area but local residents said it comes at the cost of increased property taxes and sometimes invasive expansion.

Lytle agreed that development needs careful consideration but said Fiske has often voiced concerns regarding certain projects. Prior to her tenure as alderman, he said she spoke out against the construction of The Mather, an old-age residence built in place of the Georgian, a historic hotel that needed renovations.

“She tends to be both anti-University and anti-development,” Lytle said. “She held up the development of the Mather home which is a tremendous addition to Evanston. She eventually supported it, but she delayed it at great cost to the Mather home and great frustration to them.”

During the process, he said, Fiske, who was involved in local preservation efforts at the time, expressed concerns about demolishing the historic landmark.

“If we’re going to have a preservation effort in Evanston, it’s got to be for this building,” Fiske said in 2004 according to the Chicago Tribune. “There’s no other building like it in Evanston.”

“As I look back at my time in Evanston, the change and transition is startling,” Schoenfeld said. “What are we doing about protecting the neighborhoods from encroachment by development that’s out of scale? You often see development that ends up destroying the things that made the (area) attractive in the first place.”

Schoenfeld has lived in Evanston since 1988 and serves on the Northwestern University/City Committee, the byproduct of a 2000 lawsuit that NU lodged against Evanston after the city designated a Historic District that encompassed part of NU’s land.

Situated directly to the west of NU, the 1st Ward has a long, tense history with the University, Lytle said.

As a designated not-for-profit, NU does not have to pay property taxes to the city despite utilizing local services like Evanston’s fire and police departments. In 2014, local authorities received reports of more than 500 on-campus crimes and seven on-campus fires, according the University’s annual safety report.

“The University for many, many years was very arrogant and all they wanted to do was rezone in a more permissible basis the areas around the University,” Lytle said. “And all the city wanted from the University was money.”

When Lytle ran for mayor in 1977, he said NU lived to serve its own needs and wanted nothing to do with the surrounding population. On one occasion, Lytle remembered calling NU administrators to set up a meeting for April and said he did not receive an appointment until June. This sort of attitude, he said, caused tension and apprehension between city officials and the University.

Alan Anderson (McCormick ‘99, Kellogg ‘04), executive director of neighborhood and community relations, has been at NU for just over eight months, but said he knew about the historically fraught partnership. Since the creation of the Northwestern University/City Committee in 2004, things have been looking up, he said.

“Historically, (NU has) been a great resource in terms of funding the nonprofit community or organizing volunteers for activities, and (has) oftentimes been put into reactionary positions to handle or deal with issues that may arise in the community,” he said. “With the formation of this role, we wanted to get ahead of that and be more strategic in terms of how we build and strengthen partnerships between the University and the broader Evanston community.”

NU and Evanston have launched a few projects since Anderson arrived in 2015, including an initiative to expose students to the city and its surrounding school districts.

Fiske said any perceived tension pre-dated her tenure which began in 2009, when University and city officials neglected to engage in meaningful conversation, she said. When University President Morton Schapiro arrived in the same year, she said, communication improved and the two entities formed a better partnership.

“We’re all here together and we’re going to be here forever,” she said. “As long as there’s a Northwestern and Evanston, we’re always going to be working, hopefully, together. But we hadn’t been before.”

Nevertheless, some residents said things could still be better. Patrick Hughes, Jr., a resident of the neighboring 7th Ward that encompasses NU and son-in-law of Mayor Elizabeth Tisdahl, said conflicting priorities have kept the city and NU from coexisting peacefully.

Hughes, who grew up in the city, said on one hand, NU must expand in order to stay competitive on a national level, but Evanston officials have sought to restrict that growth in order to maintain the ward’s character. The two conflicting interests have caused what Hughes described as a “frosty” relationship to this day.

“There’s been this tension between a large nonprofit not paying taxes and a city that struggles financially,” he said. “The truth is we can’t live without each other.”

Anderson said while things seemed headed in the right direction, public perception will not change overnight. He acknowledged there were significant headwinds toward regaining the community’s trust.

“I realize there’s a long road (ahead),” he said. “You can’t change public opinion instantly. If you’ve had a history of things that haven’t gone exceptionally well, you need to have a sustained set of actions and activities to build a new set of messaging. It is reasonable to say that there are some of those resonant challenges.”

New business and development signal the beginning of significant change for 1st Ward residents, who said they perceive the future with cautious optimism.

“This is a very vibrant downtown area, but in a competitive retail market, there are always new openings and other businesses closing,” Evanston Public Library director Karen Danczak Lyons said. “There’s a wonderful mix of different groups here, but the whole notion of how we support our entrepreneurs to grow is something that the library helps with.”

At the library, which was visited more than 600,000 times in 2014, Danczak Lyons instituted a number of new programs, including a book delivery bike, upcoming portable Wi-Fi hotspot rentals and computer lessons.

“I’ve emphasized the importance of bringing our programs to where our families already are so you don’t have to come into the library,” she said. “I want the Evanston Public Library to be the important third place in the lives of our residents after home and work or school … Google will give you a thousand answers — the library staff will give you the right answer and from a credible source.”

“Downtown Evanston has the moniker of being the dining capital of the North Shore; we have a lot of restaurants,” said Annie Coakley, director of Downtown Evanston, an organization that provides marketing and management services to the downtown area. “Dinner and theater go hand-in-hand. It would be the ultimate experience to have both.”

In 1974, Northlight Theatre called Evanston its home, but in 1996 moved to the neighboring town of Skokie and has been located there since. Now, community leaders and business owners want to bring a theater back to the city via a proposed downtown performing arts center on the southeast corner of Benson Avenue and Clark Street. Northlight put up a $37 million bid for the space, but plans are still under consideration.

A recent informal meeting of about 20 restaurant owners organized by Coakley yielded widespread support for the addition of a theater, she said. But, due to a possible plan which would allocate increases in property taxes toward funding the project, it faces an uphill battle from city officials and residents in opposition to the proposed taxations.

In October, officials received the go-ahead to begin development on Fountain Square renovations, which has sat in the center of Evanston since 1854 and has not been re-done for 40 years. Although plans have not been solidified, some ideas include a splash pool for children, mid-block pedestrian plaza and outdoor dining.

“Evanston lost its department stores to big malls, but then it rebounded again with movie theaters, entertainment and restaurants,” Fiske said. “Evanston has always been a really dynamic place. … How do we keep reinventing?”

Fiske and Lytle said they were optimistic for the ward’s future. Although challenges remain, Fiske said increased communication between University and city officials have provided a better framework to deal with issues.

“The 1st Ward is really the heartbeat of Evanston,” Lytle said. “It’s the economic engine that makes this such a great city.”

This story was updated to clarify Judy Fiske’s involvement with preservation efforts during discussions over the construction of The Mather. It was also updated to include a quote from Fiske reflecting her stance at the time about the building’s construction.