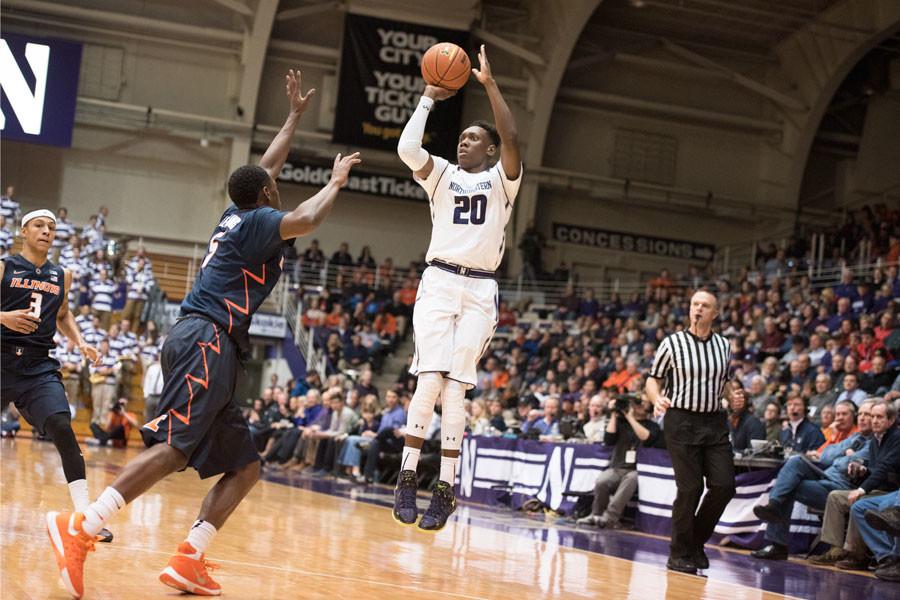 Scottie Lindsey shoots a 3-pointer. The sophomore guard converted on 4-of-7 3-point shots on the night.

Riding a three-game streak in which he shot 57.9 percent from the field, the sophomore guard repeatedly excited the Welsh-Ryan Arena crowd with 3-pointers, blocks and dunks. He notched 18 points overall on 6-of-10 shots, tying senior guard Tre Demps to lead all scorers and setting a new career-high in a Big Ten game.

A largely inconsistent player for most of the year, Lindsey acknowledged his struggles and said he recognized the need to improve following the Wildcats’ loss to Michigan State last month.

“I just knew that I had to bring more things to the table,” Lindsey said. “I felt like at that time … I wasn’t doing everything I was supposed to do to help my team. I just had to come out, play with a lot more energy and help the team out more.”

Playing a season-high 30 minutes against Illinois, he led an otherwise underwhelming NU offense that scored only 21 points in the first half. Lindsey drained four of his first five 3-point attempts, helping the Cats tread water in a back-and-forth affair that featured 14 lead changes.

As the game wore on, and as both offenses picked up the pace in the second half, Lindsey took somewhat of a backseat to Demps, who at one point scored 4 consecutive 3-pointers to give NU a 54-49 lead late in the game. Demps, however, said it was Lindsey’s work ethic in practice that helped get the Cats on track against the Fighting Illini.

“(It’s) gotten so much better just from his drills,” Demps said. “His cuts are so much more crisp, and I think we’ve been seeing the fruit of his labor. He’s just got to keep it going on that path.”

Lindsey was clearly on “that path” Saturday night, as his block late in the game led to a Demps breakaway layup that ultimately sealed the win. The sophomore’s four 3s also tied a personal-high for most 3-pointers in a conference game, matching the mark he set last February against Nebraska.

Not only did Lindsey receive praise from his teammates, but from Illinois coach John Groce as well. As both teams struggled to build large leads Saturday night, Groce said Lindsey’s offensive bursts were among the main reasons why the Fighting Illini couldn’t seem to put NU away despite outshooting the Cats from beyond the arc.

However, NU coach Chris Collins said that defense is what made Lindsey really great against Illinois.

“I just thought he had a great floor game,” Collins said. “That’s why I told him after the game, ‘That’s what I see in him and that’s why I coach him,’ because I see a guy that has a chance to be an outstanding player.”

With the win under his belt, Lindsey next needs to turn his attention to Tuesday’s game against Purdue. Defending the seven-foot duo of centers A.J. Hammons and Isaac Haas, in addition to forward Caleb Swanigan, will be a tall order.

Collins isn’t worried though, saying that if Lindsey continues his high-caliber play fans will get used to seeing him on the court.

“Scottie’s a talented player,” Collins said. “To me, he has a huge upside, and he’s still just a sophomore.”