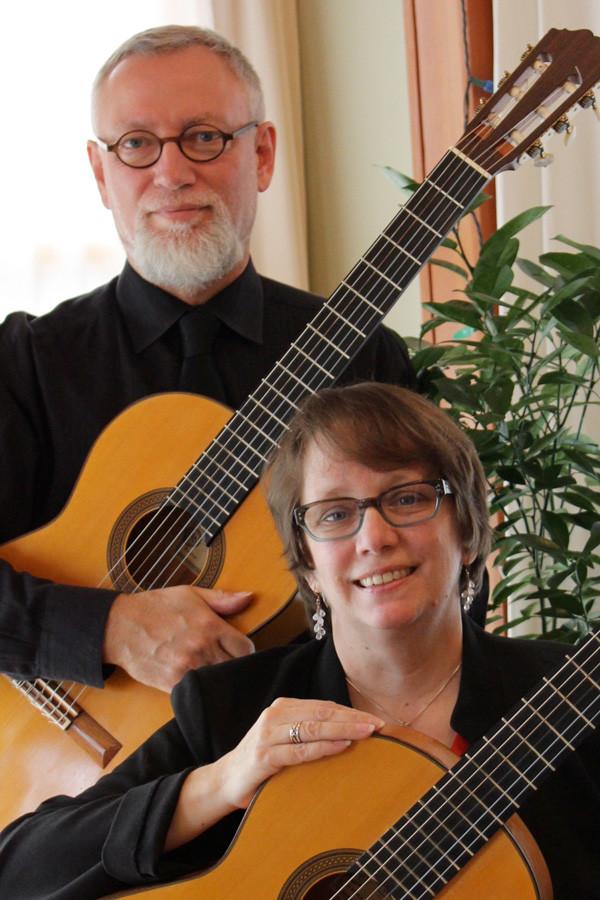 Anne Waller’s grandfather played on Northwestern’s 1899 football team. Her mother also attended NU. When it was time for her to go to college, the choice seemed obvious.

However, there was one problem: Waller wanted to study classical guitar, something that wasn’t offered at the University when she was a high school senior in 1973.

So, Waller ended up studying guitar performance at Macalester College. She didn’t return to her NU roots until 1985, when she came to NU to start and direct the guitar program at the Bienen School of Music.

“It fell to Anne to come and start this program at Northwestern,” said her husband, Mark Maxwell, who has been teaching classical guitar at DePaul University since 1986.

This Sunday, Waller and her husband — who met at Southern Methodist University as graduate students — will take part in a concert for the Segovia Classical Guitar Series as the Waller and Maxwell Guitar Duo.

The two guitarists, who have been playing together for 35 years, will take the stage at the Mary B. Galvin Recital Hall in the Patrick G. and Shirley W. Ryan Center for the Musical Arts, where they will be joined by a couple of Waller’s former students.

Waller started the series at NU in 1993, named after the famed guitarist Andrés Segovia — often considered to be the father of the modern classical guitar movement — to commemorate Segovia’s 100th anniversary and to provide a venue for classical guitarists to perform. Past concerts have included lute players, flamenco dance companies, Brazilian groups and Chinese pipa players.

“The guitar series is in its 23rd year this year, and we’re excited to be moving into the new hall,” Waller said. “We decided as part of that season we should do a concert and invite alumni back to come and play with us.”

Sunday’s concert will feature guitar playing from the duo, as well as two quartets and an octet. The diverse concert set will span about two centuries worth of guitar repertoire, Maxwell said, including pieces ranging from Spanish to Cuban to an opera piece written for Queen Elizabeth II’s coronation.

One of the added benefits of the series is that the people who perform also teach while they are here, Waller said.

“It’s really an asset for the students, because they get to benefit from people from all over the world coming in,” she said. “Teaching has always been a big, important reason that we do the series, to get these people on campus and help them share their wisdom with students.”

Jesse Langen (Bienen ‘96, ‘97), a former student of Waller’s who will be performing in the concert, said he is excited to get a chance to play with other guitarists, a rare opportunity for an instrument with a repertoire mainly geared toward soloists.

“If you play guitar, your life is lonely,” he said. “Many of my favorite people are guitar people, who I never get to see, because if I’ve been hired to be there, it means they’re not there.”

As most of the guitar repertoire is written for soloists, Waller said it is often more challenging for two or more people to play together and coordinate the timing and precision because, compared to instruments like the piano, a plucked instrument does not produce as resonant a sound. Playing in a duo, however, allows for a greater variety of pieces to play, she said.

“It allows you not only to play a very interesting literature for two guitars and to have the experience of making music collaboratively, but also … it opens the door to a lot of music that is too much for just one guitar,” she said.

Waller’s love for and foray into the guitar began at an early age. She played her first guitar — an electric guitar — when she was nine, but quickly realized it didn’t suit her. Not only was it too heavy, but she had to plug it in in order to play sound.

Instead, she discovered her love for classical guitar, which was cultivated through music her mother often played at home by Segovia. She hasn’t looked back since, even in times when she has had to struggle for acknowledgement from other musicians.

“There’s always been for guitarists in the classical music world a little bit of a challenge to be taken seriously,” she said. “Maybe more than some instrumentalists, guitarists are always a little more on a mission to promote our instrument and our literature.”

As a professor, Waller has had a tremendous influence on his style as a musician, and two concepts in particular have been formative to his understanding of music, Langen said.

Those two concepts are to respect the music that you are playing by staying true to the composer and to allow your body to express the music you are playing. These ideas, Langen said, are something that all of Waller’s students — past and present — share.

However, what really strikes Langen about Waller is her love for music, no matter how difficult or how simple the piece is.

“The job is the same all the time,” he said. “If you’re playing music, you’re trying to make something beautiful. It could be three lines of music written for an eight-year-old, and it’s the same for her. It’s the same thing as the most impressive and daunting piece for guitar.”

Waller said she hopes that by putting on the series each year, people will realize and appreciate how vast the classical guitar literature is. For aspiring guitarists and the public in general, Waller emphasized the importance of experiencing music live.

Waller and her husband have shown their appreciation for the art by playing as a duo in countless places around the U.S. and internationally. She said one of her favorite memories is playing with Maxwell in Italy at midnight for an event hosted by a member of the Medici family.

Even though the two have been playing together as a duo for longer than they’ve been married, they sometimes still have to schedule appointments with each other, given their busy schedules at different universities, Maxwell said.

However, the special bond they have as both duo and life partners makes playing all that much better, he said.

“There’s a special connection that you have,” he said. “You can almost close your eyes and play with a free tempo — tempo rubato — and play all the notes together, because you’ve been doing it for so long.”