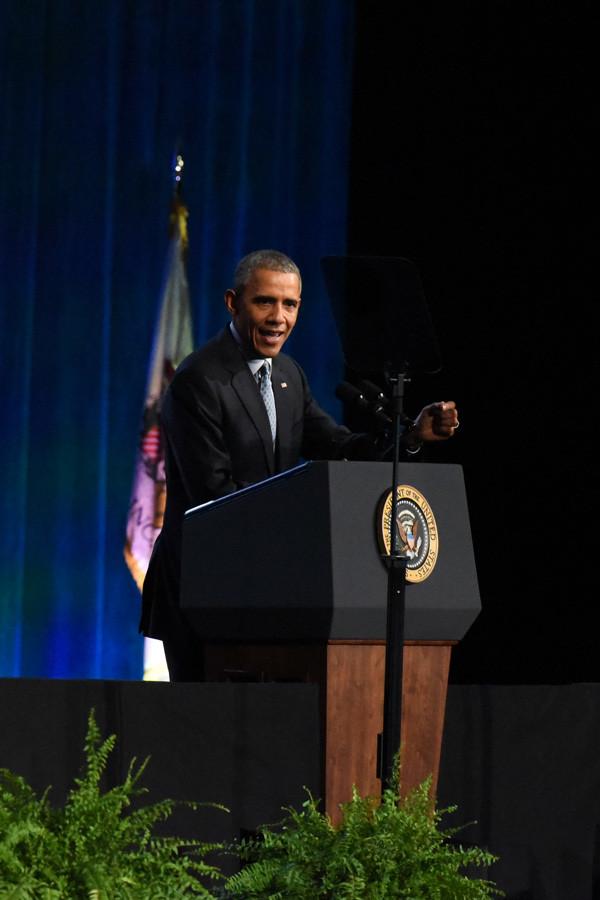 President Obama speaks to the International Association of Chiefs of Police in Chicago in October. On Wednesday, Obama addressed the Illinois General Assembly in Springfield, where he declared his presidential candidacy nine years ago.

President Barack Obama called upon Illinois state legislators to escape the “poisonous political climate” of partisan politics and work across party lines in his address to the Illinois General Assembly on Wednesday afternoon.

Obama’s speech marks nine years since his presidential campaign announcement in Springfield, a campaign marked by Obama’s expressed desire to promote bipartisanship. The country’s political climate, however, is still highly polarized today, he said, and it is up to legislators in office to make peace and move forward. Although most of his discussion on gridlock was aimed at Washington, the topic was salient to the state assembly, currently on its eighth month without a budget.

“If we can’t compromise, by definition we can’t govern ourselves,” Obama said.

He also said legislators need to be asking themselves, “What can we do, all of us, together, to try to make our politics better?”

The president also talked about changes he wanted to strive for in his last months in office, including ending gerrymandering of congressional districts, making it easier to register to vote and limiting the power of big money on politics. Obama brought up the possibility of a constitutional amendment to overturn the Supreme Court’s Citizens United decision in his speech.

Rep. Robyn Gabel (D-Evanston) told The Daily the speech was well received by both Republicans and Democrats in the assembly and his speech provided a framework for a “more productive and mature” political environment.

Gabel said she was pleased to hear him mention legislation she and Sen. Andy Manar (D-Bunker Hill) have proposed to register eligible citizens to vote when they apply for their driver’s license.

“He talked about voter participation, which I think is at the root of our democracy,” Gabel said.

Obama also reminisced on his time as a state senator in Springfield and the friendships he was able to make across party lines. He said in order for politicians today to succeed and make progress, they need to stop calling each other “idiots and fascists,” and be willing to compromise.

The consequences of having a government unable to compromise will soon hit Illinois public agencies, as the state will not have funds to provide certain services or renew grants as the budget stalemate continues. City manager Wally Bobkiewicz said the lack of budget causes uncertainty about how to provide services in the future still without a budget.

“We have made the decision that we need to continue to serve the residents of Evanston,” Bobkiewicz told The Daily last month. “When we know whatever the final resolution is and what the impacts are we’ll deal with it and in the meantime … we’re just trying to keep things status quo while still doing things.”

Despite his negative experiences in trying to overcome the country’s political bipartisanship, Obama said he believes in America’s ability to cooperate, and said ability was the cause of his presidential successes, such as healthcare reform and bailing out the auto industry.

“Even as we change the way system works, we also have a responsibility to change the way that we, as elected officials and as citizens, work together,” Obama said. “This democracy only works when we get both right — when the system is fair, but also when we build a culture that is trying to make it work.”