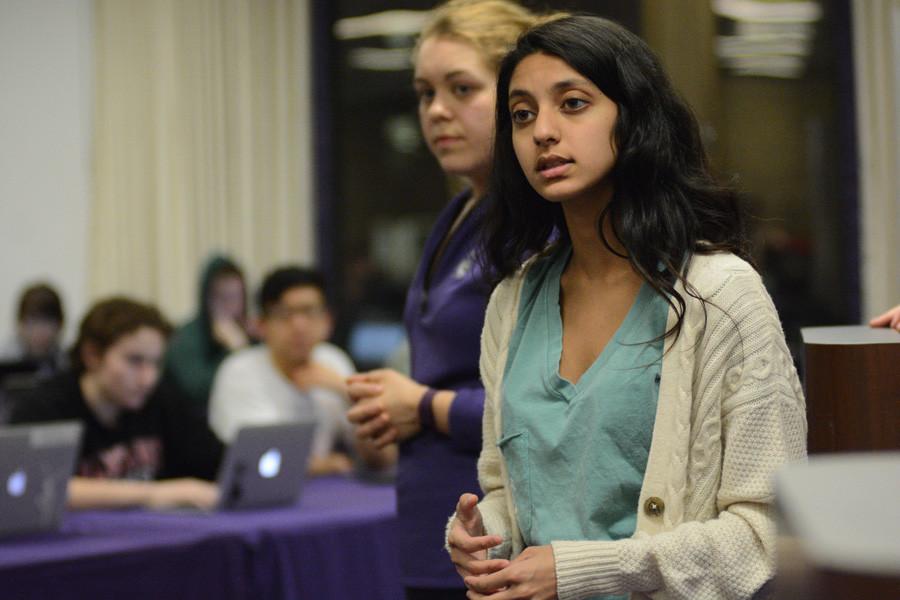 Weinberg sophomore Nehaarika Mulukutla introduces legislation supporting the creation of a relaxation room. The room would be in the new student center once Norris University Center relocates to the Donald P. Jacobs Center.

A new relaxation and wellness space should be incorporated into the area the student center relocates to, Associated Student Government senators proposed Wednesday.

Legislation was introduced to support the creation of a wellness space once the student center temporarily relocates to the Donald P. Jacobs Center where the Kellogg School of Management is currently housed. This transition is expected to begin in 2017 when the University Commons construction project begins.

Co-sponsor Danielle Hojnicki, a Weinberg freshman senator, and student life committee member Nehaarika Mulukutla presented the resolution and said the room could provide a place for students to de-stress and possibly serve as a location for Take Time mental health programs, which are organized by the student life committee.

A wellness center called the Library Room previously existed in Norris University Center, Mulukutla said, but had to be removed to make space for other student groups. The new wellness center could include meditative music, coloring books and a relaxation station, the Weinberg sophomore said.

“This is one facet of what student life is doing as a whole to increase mental health awareness and mental health regulation at Northwestern,” Mulukutla said. “This isn’t the only thing that we’re doing and by no means are we saying that this is going to be the end-all-be-all solution.”

Earlier, ASG scheduled an open forum to discuss senator representation for next week before senators vote on an amendment to the ASG constitution that would equalize Greek senators, decrease off-campus representation and increase student group representation.

The forum, to be held at 6 p.m. on Feb. 17, will hopefully encourage students to voice their opinions on the proposed representation reform, speaker of the Senate Matt Clarkston said. The location of the forum is undecided but may be in the Northwestern Room of Norris University Center, where Senate meetings are normally held, the Weinberg senior added.

“ASG can always do its job better the more people let us know what’s on their minds,” Clarkston told The Daily. “This concerns a lot of different groups on campus so I’m hoping that people from those groups will show up and give their two cents.”

The forum, which is required when an amendment to the constitution is introduced, will replace the four caucus meetings before Senate, Clarkston said. Students attending the forum may stay for Senate afterward when senators will vote on the amendment.

“A lot of people in and out of ASG feel like there are things we can do to better represent students,” Clarkston told The Daily. “People have a lot of different ideas of the reform … and the changes that we should make to do that better. So I’m hoping that we’ll have lots of different ideas tossed out and a really fulfilling discussion on if this is a change that we want to make.”

The amendment, introduced by senators Kevin Luong and Erik Baker last week, would provide all four Greek associations with two senators each. Currently, Multicultural Greek Council and National Pan-Hellenic Council each have one seat in the Greek caucus while Interfraternity Council and Panhellenic Association each have five. Six senators would be added to the student group caucus, increasing representation from 15 senators to 21. Off-campus representation would decrease by two senators.