Men’s Basketball: Pardon to get second start as Wildcats head to Ohio State 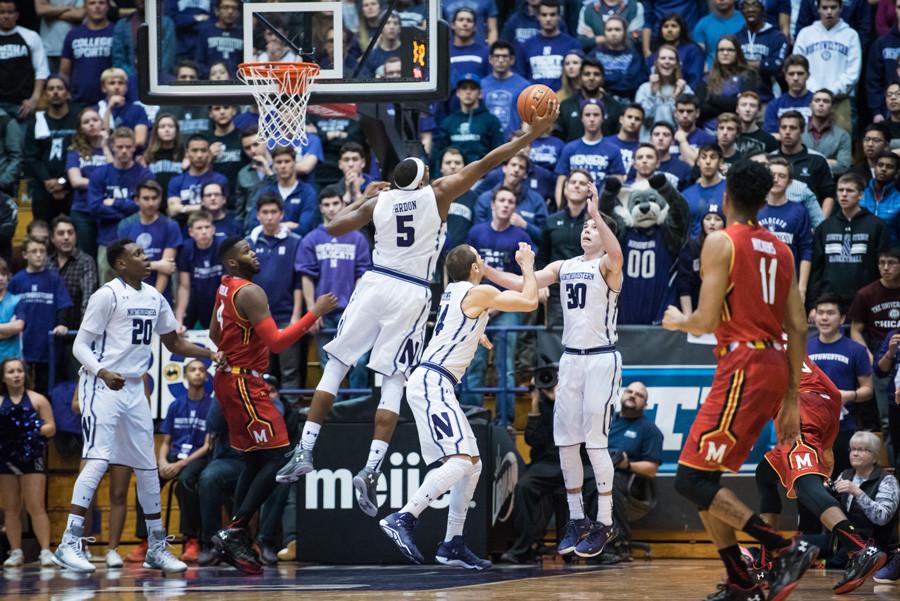 Dererk Pardon leaps for the rebound. The freshman center will be making the second start of his career at Ohio State on Tuesday as he travels to his home state of Ohio.

“I have a lot of family and friends coming (to the game),” Pardon said. “It’ll be a good atmosphere. I think it’ll be real fun going back.”

Inserted into the starting lineup last Thursday against Minnesota, Pardon recorded the game’s first basket in his first-ever start, finishing with four points and four rebounds.

As fellow senior center Alex Olah and graduate transfer center Joey van Zegeren continue to be limited by stress fractures in their feet, coach Chris Collins is sticking with the freshman moving forward.

“His energy and enthusiasm got us off to a great start (against Minnesota),” Collins said. “For Dererk’s growth and where he’s headed, I thought he was ready for it. I’m going to stay with (him).”

The dominant 82-58 victory over the Golden Gophers helped restore some of the “mojo”, per Collins, the Wildcats had lost in their five-game losing skid. Senior guard Tre Demps continued his resurgence from a recent slump, scoring 23 points after dropping a career-high 30 in the previous game, and sophomore guard Bryant McIntosh brought the crowd to its feet by setting the program’s single-season assist record.

However, back on Jan. 6 — NU’s first meeting with the Buckeyes this season — the then-13-2 Cats entered the contest riding on plenty of momentum but fell flat as the game progressed. Pardon’s game- and career-high 14 rebounds were unable to help the team survive a weak second half en route to a 65-56 loss.

Ohio State guard Kam Williams erupted for 21 points on 8-of-13 shooting that night but has failed to replicate that level of play since, shooting just 32.3 percent and averaging only 6.8 points per game over his last four outings.

His inconsistency is indicative of a Buckeyes team that has struggled to score this season, ranking tenth in the conference in points per game and failing to sport a single player among the Big Ten’s top-20 scorers.  They have dropped five-of-eight games since winning in Evanston and have lost two in a row to Maryland and Wisconsin.

But Ohio State does boast a formidable defense, ranking sixth in the conference in points allowed per game and second in blocks. Big men like 6-foot-11-inch Trevor Thompson, who had 10 rebounds in the first meeting with NU, and 6-foot-10-inch Daniel Giddens, who tallied three blocks, severely disrupted the Cats’ offense last month.

“They funnel you to those shot-blockers, and if you shoot those crazy shots in the lane where you’re off-balance, they lead to fast breaks,” Collins said. “Bad shots and turnovers led to a lot of open-floor opportunities for them, which really hurt us.”

He added completing the “extra pass” for a better shooting opportunity will thus be one of NU’s main focuses for its rematch Tuesday, which could equate to a greater emphasis on short-range layups and dunks and an enhanced role for Pardon and the other centers.

Pardon, for one, is eager for the opportunity.

“I’ve been working with the coaches on different post moves, different ways to get open shots at the basket,” Pardon said. “We have a better gameplan now.”