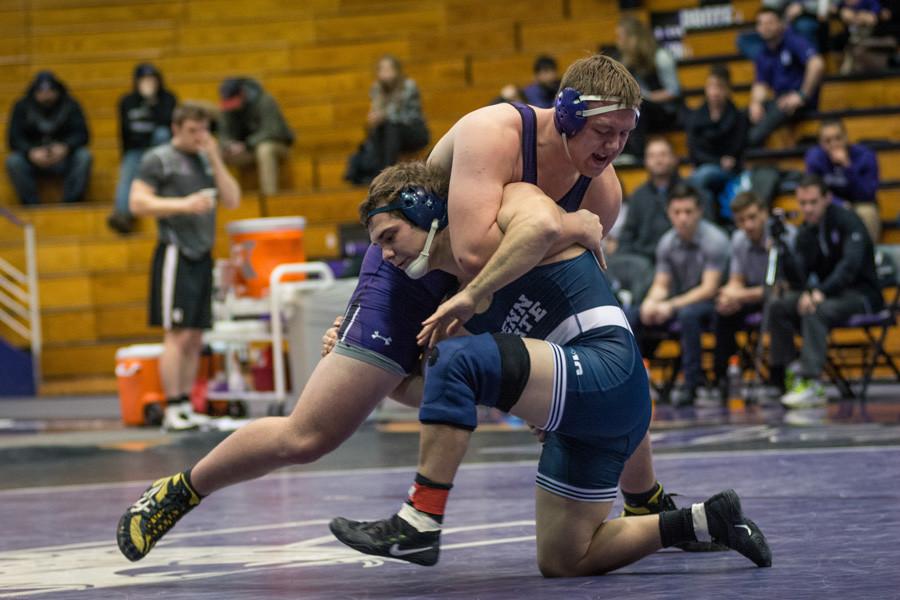 Conan Jennings wrestles with his opponent. Northwestern lost both of its matches this weekend during the 285-pound bouts, Jennings’ weight class.

It was another winless weekend for the Wildcats, who are now in the midst of their worst losing streak since 2003.

Cats heavyweight wrestler Conan Jennings went into his matchup against Minnesota with a 20-18 NU lead. But Golden Gophers wrestler Michael Kroells, who is the No. 9 wrestler in the heavyweight division, defeated Jennings in an 11-2 major decision.

On Sunday, the Cats had a 24-19 lead going into the heavyweight matchup between Jennings and Illinois wrestler Brooks Black. For NU to come away with a win, Jennings just had to avoid losing by a fall. But with 1:53 gone in the first round, Black pinned Jennings to give the Fighting Illini the team win.

Cats interim coach Matt Storniolo said the team has shown a lot of fight these past couple of matches.

“Conan is handling it as well as he can,” Storniolo said. “It’s a tough situation for him as a freshman especially. He just needs to keep his head up and keep focused on the next opponent.”

Although the team hasn’t won a match since November, some NU wrestlers have done well recently, prevailing in individual matches to boost their tournament chances.

Junior Jason Tsirtsis, who is the No. 4 wrestler in the country in his weight class, had a mixed weekend. Tsirtsis fell to Minnesota’s No. 16 Jake Short in a 7-4 decision, but defeated Illinois’s Kyle Langenderfer 9-3.

The senior is now 11-9 on the season and said these past two wins were huge for his tournament resume.

“These wins are very important in making sure I close out the season strong and getting the momentum going into the postseason,” White said. “I’m just trying to keep the ball rolling with these two and pick up a couple more wins before we get to Big Tens and NCAAs.”

Along with White, junior Jacob Berkowitz also picked up a vital win against Illinois on Sunday. Berkowitz wrestled before Jennings in the second-to-last match of the dual, giving the Cats a five-point lead.

The junior pinned his opponent in 6:35 and set NU up to potentially record its first win in months. Even though the team couldn’t pull off the upset victory over Illinois, Berkowitz said it was important to come close because it helped the team prove itself.

“We’ve been working this week really hard on looking for points all throughout the match,” Berkowitz said. “Good things are going to happen, and no matter where you are in the match, you have to continue to look for points.”