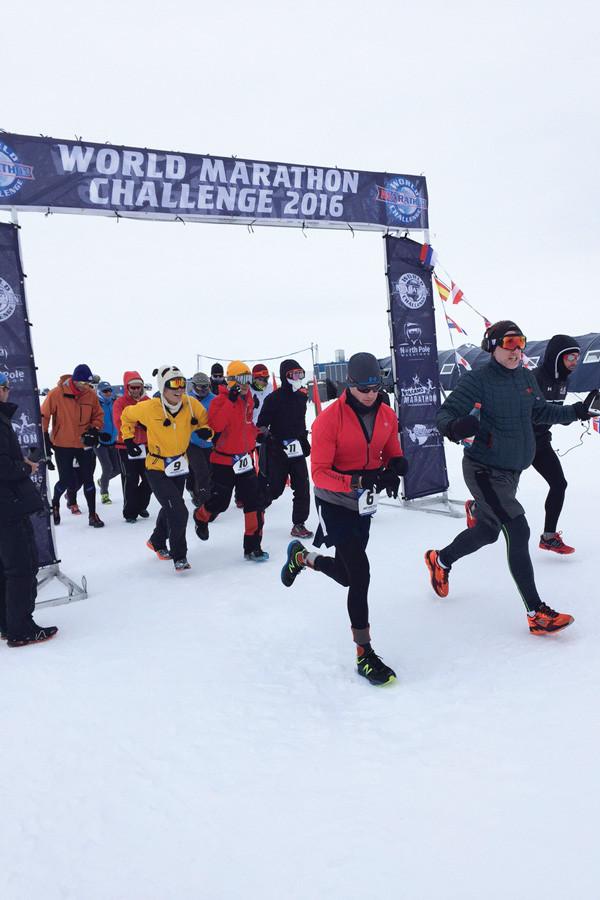 Daniel Cartica (6) begins his first of seven marathons on seven continents in a week. Cartica, a Naval ROTC instructor at the University, completed the World Marathon Challenge on Jan. 29, setting a new WMC record of 3:32:25 per marathon.

As he trekked along the Dubai beachfront, Daniel Cartica was exhausted.

Less than a week earlier, the Marine Corps captain had run a marathon through Union Glacier, Antarctica. The day after, he ran another, this time along a windy waterfront in Punta Arenas, Chile. Next came marathons along Miami’s South Beach and through Madrid. Nearly seven hours later, he was racing down uneven brick terrain in Marrakech, Morocco, before fatigue set in a day later in Dubai, United Arab Emirates.

It didn’t help that his right hamstring was throbbing or that he still had 15 miles remaining in his Dubai run and another marathon awaiting in Sydney the next day.

But through the pain, Cartica — currently serving as the Marine Officer Instructor for Northwestern’s Naval Reserve Officers Training Corps — pushed forward, finishing his seventh marathon on his seventh continent in seven days on Jan. 29, averaging 3:32:25 per marathon, a new World Marathon Challenge record.

“I’ve always lived with the motto or philosophy, ‘get comfortable with being uncomfortable,’” Cartica said. “Growing up, I’ve always liked to push the limits, try to find what I perceive to be my max … I embrace pain. I embrace the challenge. I embrace ultimately seeing how far I can push my body until I reach that limit.”

When he crossed the finish line, few who knew him were surprised by the end result.

“I know the kind of person he is,” said Maj. Patrick Blankenship, a Naval ROTC instructor at Cornell University and a Marine Corps Logistics Officer previously deployed with Cartica. “I know that he’s been getting up, sometimes at 2 in the morning in negative 2 degree weather in Chicago, going to work after that and doing it again the next night.”

Cartica, who approaches his fitness holistically, didn’t limit his training to running. His preparation included swimming — both distance and interval — and CrossFit.

Kyle Berg, an assistant coach for Northwestern’s women’s swimming and diving team, said Cartica’s work ethic is “second to none.” Berg helped Cartica train for the marathons after Cartica asked for assistance in the pool.

And once the 27-year-old finished his final marathon, all the hard work paid off.

“I felt a sense of purpose for what I sought out to do,” Cartica said.

Cartica first learned about the challenge in July 2015. Days later, five servicemen were killed in a terrorist attack in Chattanooga, Tennessee, and something clicked in Cartica’s head.

However, he hadn’t always planned on entering the Corps. Pursuing track and cross country first at Clemson University and then at George Washington University, it wasn’t until the end of his senior year in college that Cartica decided to join the Marines.

“I knew if I didn’t do it, it’d be something later in life that I regretted,” he said. “The timing was just right, the iron was hot, and I decided that now was the right time I wanted to serve my country.”

After graduating in 2010, Cartica served as a Logistics Officer with the 1st Battalion, 5th Marines in California’s Camp Pendleton. He was then deployed twice — first to Okinawa, Japan and then to Darwin, Australia.

As a Logistics Officer, Cartica was tasked with what he called “the most complex Military Occupational Specialty that the Marine Corps has to offer” — providing food, medical care and other supplies in combat environments.

Blankenship said the job was perfect for Cartica with its focus on assisting others. The same goes for Cartica’s current role as a Naval ROTC instructor at NU and neighboring universities.

“He’s an outstanding example to young people who want to become officers in the Marine Corps,” Blankenship said. “He’s a lifelong learner. He imparts that upon people that he works with, so I think that his drive, his energy, his sincerity make him intimately qualified for the job.”

Regardless of his role, whether as a Marine, as a teacher or as a runner, the notion of “service before self” pushes Cartica forward, he said. It’s what motivated him to join the Corps and what subsequently prompted him to assume a job that allows him to help others meet their goals.

And when fatigue and pain set in during his sixth marathon in as many days, Cartica said, it was a glimpse inside the minds of the families of the servicemen who lost their lives in Chattanooga — one that propelled Cartica forward and into the record books.