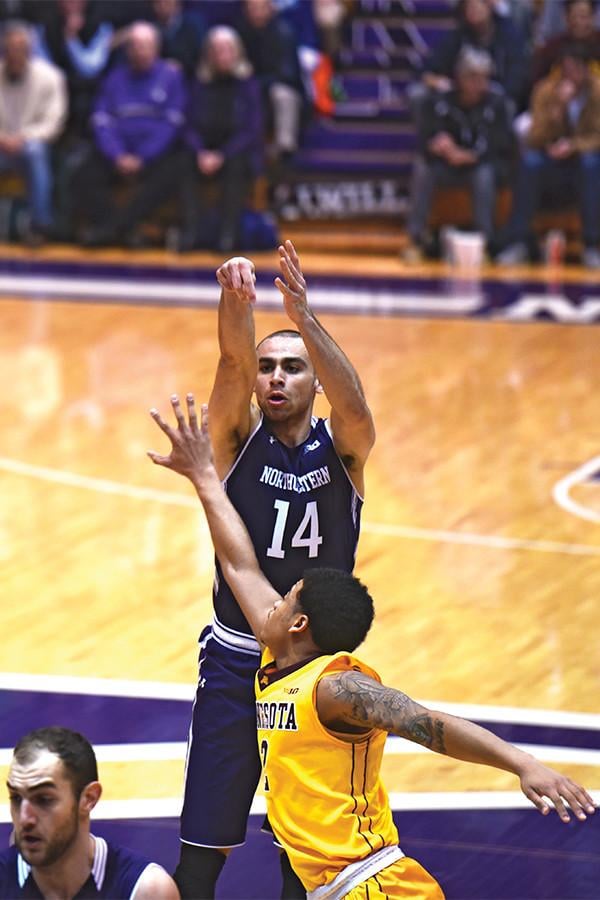 Tre Demps takes a jump shot. One game after setting a career-high in points, the senior guard continued his hot play on Thursday, dropping 23.

With just under 12 minutes remaining in Thursday’s home bout against Minnesota, the visiting Golden Gophers called a timeout. In response, a purple-clad Welsh-Ryan Arena rose to its feet.

In the three minutes prior, senior guard Tre Demps scored 7 points. His backcourt partner, sophomore Bryant McIntosh, assisted on two of them and scored 5 of his own. The energy in the arena was palpable as Northwestern basked in a remarkable sequence unlike any it had seen over its prior five-game losing skid.

“When every team’s two best players are playing well, usually that’s going to carry over to the rest of the guys,” coach Chris Collins said. “I just thought they had a great command of the game today.”

For the first time in a while, both of the Wildcats’ starting guards were playing well together. They ran the floor in sync, shot the ball spectacularly from deep — combining to finish 7-of-14 from three-point range — and collectively enjoyed their best performance of Big Ten play.

In the end, McIntosh notched 20 points and 3 assists, breaking the program’s single-season assist record in the process. Demps, on the heels of a career-high 30 points against Iowa, tallied 23 and a career-high 8 assists.

From start to finish, the Cats’ two offensive leaders powered what had been a lifeless NU scoring attack entering Thursday’s contest.

“They shot a great percentage, but what I like is they had 10 rebounds and they had 11 assists and only two turnovers,” Collins said. “To me those are great numbers. … I thought they were fantastic and that they led us all night long.”

Demps seems to be finally finding his touch after a start to Big Ten play he’d likely rather forget. His career outing against Iowa was indicative of a returning confidence that was missing during a January stretch that saw him shoot 30 percent or worse on five separate occasions.

During his slump, Demps did little to stimulate an offense that badly needed a second shot creator alongside McIntosh. Possessions would dry up when the ball entered his hands and the NU faithful would hold its collective breath whenever the fifth-year senior released a 3-point attempt.

But recently, the opposite has been true, with back-to-back vintage performances from Demps.

“I’m starting to feel more confident,” Demps said. “But I’ve got to give a lot of credit to our coaching staff and the guys because they’ve continued to believe in me. And when you have that kind of support, you don’t quit.”

But as he slowly re-found his shot, McIntosh’s dried up. The sophomore guard’s 2-of-6 outing from the field against Iowa was preceded by three-straight contests in which his shooting percentage failed to crack 30 percent. And in the four games leading up to Thursday’s win, McIntosh averaged just 4.5 assists.

But against a struggling Minnesota defense, the starting lineup’s only shot creators executed in full force. From start to finish, the duo breathed life into an NU offense that — for the first time in a while — had no apparent weakness in the backcourt.

“Unfortunately, I think throughout this year, either I’ve been going and he’s not played as well as he could, or it’s the other way around,” McIntosh said. “It’s nice finally having one night where we were both clicking on all cylinders, and we played really well off each other. I think it’s pretty fun basketball when you can see that.”