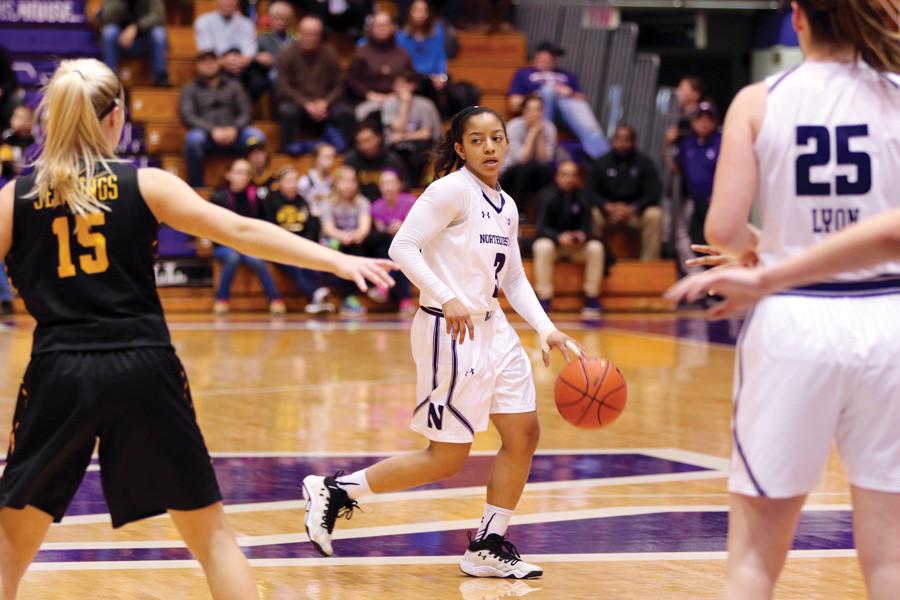 Ashley Deary bring the ball up the floor. The junior guard struggled against Iowa on Sunday, scoring 6 points on 14 shots from the floor in defeat.

For a reeling Northwestern team that entered this season looking to make an NCAA Tournament run, Sunday’s home game against Iowa was nothing short of a must-win.

But, once again, the Wildcats wilted down the stretch and were unable to take care of business.

“For about 35 minutes, (this was) a really good college basketball game,” coach Joe McKeown said. “Back and forth, teams played hard, everybody competed. We just didn’t do enough to defend Iowa when we needed to in the fourth quarter.”

After a promising 11-1 start to this season, the Cats had lost seven of nine games heading into Sunday’s contest. NU wasn’t the only team desperately searching for a win though — Iowa has made eight consecutive tournament appearances but started just 4-5 in the Big Ten this season.

McKeown said he believes the Hawkeyes are better than their record.

Freshman forward Pallas Kunaiyi-Akpanah’s absence played a major role in the defeat. She picked up three fouls in the first quarter and then a fourth early in the third quarter, and was limited to just 12 minutes in the game. Without her presence, NU struggled to defend and rebound on the interior.

“Iowa’s big kids (Coley and forward Megan Gustafson, who had 15 points and 13 rebounds) really hurt us tonight,” McKeown said. “(They were) probably the difference in the game.”

In front of a raucous crowd that featured plenty of purple but also an entire section of black and yellow-clad Iowa fans, the Cats and Hawkeyes traded blows for the entire 40 minutes.

A sharp shooting disparity began in the first half. After senior guard Maggie Lyon knocked down a 3-pointer just 11 seconds into the contest, NU missed its next 10 long range attempts of the half.

“(Iowa) kind of contained the lane, shut it down, forced us to have to maybe shoot the ball outside,” McKeown said. “We didn’t shoot it well today at home, which is really disappointing.”

However, the Cats used advantages in turnovers and offensive rebounds to stay in the game. NU forced nine Iowa turnovers and grabbed eight offensive boards, and trailed by just 3 points at the half, 36-33.

Coffey said the Cats’ good stretches came when they moved the ball well and crashed the offensive glass.

“When we reverse the ball, we’re a very good team,” Coffey said. “Whenever we have a lot of communication and movement, we play really well.”

After three quarters, the Cats still trailed due to Iowa’s hot shooting. The Hawkeyes knocked down 8-of-15 shot attempts in the third quarter and expanded their lead to 54-50.

With just 10 minutes remaining and the prospect of dropping to 2-8 in the Big Ten looming, NU needed to somehow find a way to gut out a win in the fourth quarter.

“We just need to have focus all four quarters,” Lyon said. “At the end of games is when you need to grind out possessions, get stops, and take care of the ball, and we need to hone in on that a little bit more.”