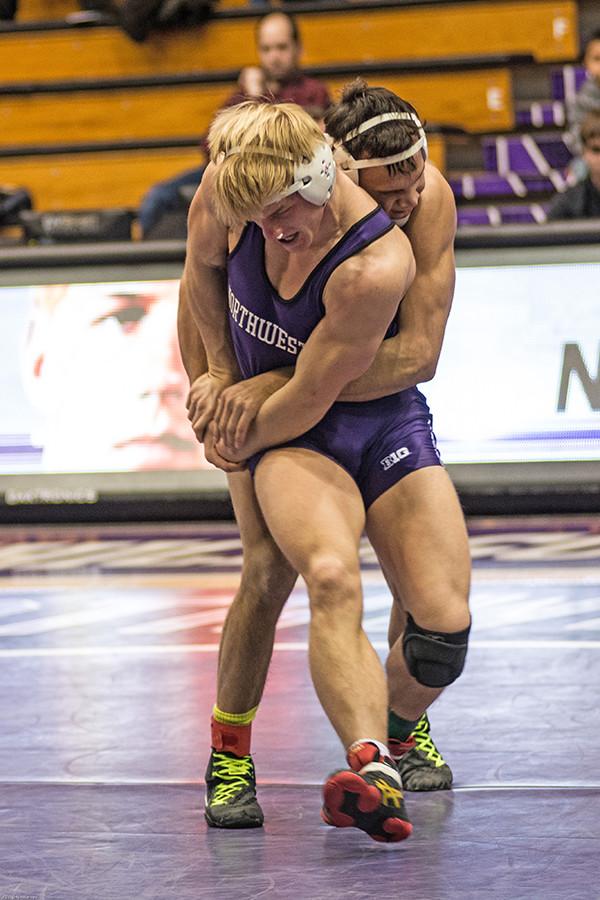 Luke Norland wrestles with an opponent. The freshman will be looking to rebound from his 6-0 loss two weeks ago.

In 2013, Garrison White walked out onto the blue and maize mat and glanced around Cliff Keen Arena. The then-freshman wrestler was set to compete in his first ever Big Ten road match against a ranked opponent.

White grappled with Wolverines freshman wrestler Rossi Bruno, and neither could gain the advantage. But with five seconds left in the match and the score tied at 3, White got the better of Bruno and recorded a takedown to win in a 2-point decision.

Now a senior, White will return to Cliff Keen Arena for a dual for the first time since his freshman year when the Wildcats hit the road on Friday. Northwestern (1-7, 0-3 Big Ten) travels to Ann Arbor for a matchup against No. 6 Michigan (9-1, 4-0), and will then immediately take a trip to East Lansing to face Michigan State (0-12, 0-7) — the only team in the Big Ten below NU in the standings.

“I remember walking into Michigan as a freshman and just going out there and beating a wrestler who was ranked higher than me,” White said. “It really got the ball rolling for me and that was probably my first big conference win.”

The last time the Cats faced Michigan was Jan. 27, 2013, and then-No.23 NU fell to the then-No.18 Wolverines 23-13. Although the Cats are going into the Michigan dual with a conference record similar to the previous contest, the Wolverines have been dominant this season.

Michigan’s only loss this season came in November to then-No.14 Oklahoma, and the Cats have scored just 4 points in their last two duals combined. Although the two teams are coming into the match with two exceptionally different track records, they will have the same goal of racking up wins to help with individual wrestlers’ tournament chances.

The Spartans still have not won a dual this season, and Sunday’s competition should serve as one of the easier matches of the season for the floundering Cats. But NU wrestlers won’t take the Spartans for granted.

Malone, who was ranked No. 19 when the Cats last played Michigan State, said after he escaped with a close 3-point victory in 2013, he knows what his opponent is capable of.

“You say that you wrestle every team the same, but there’s definitely a factor there that’s different,” Malone said. “But, I think we have a lot of potential to beat both Michigan and Michigan State this weekend and perform well.”