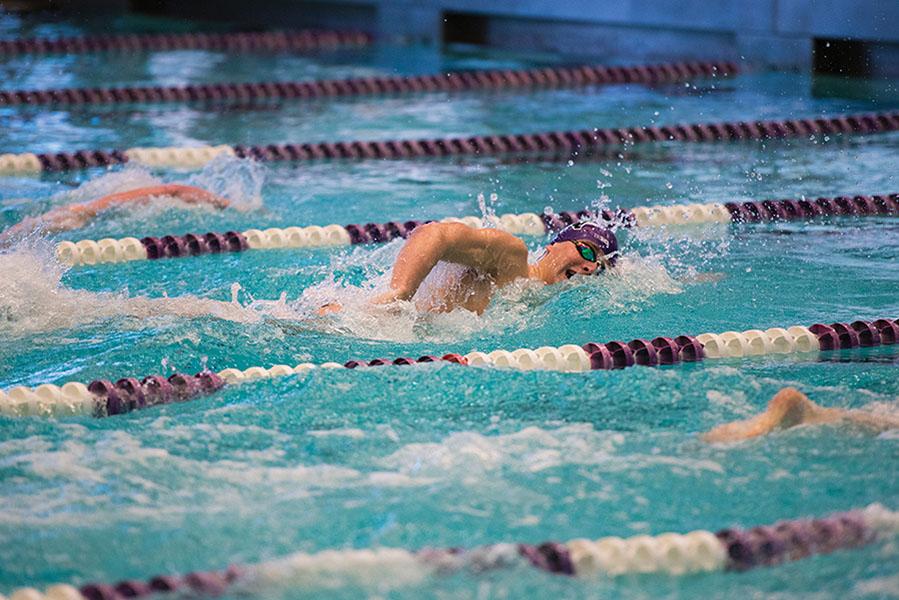 Anthony Marcantonio races against opponents. The freshman has shined for the Wildcats this season and coach Jarod Schroeder has said he is impressed by all the freshmen.

After a series of tough losses, Northwestern’s outlook is bleak as it takes on No. 20 Minnesota and Purdue this weekend.

That does not mean the team has lost hope, however. In fact, the Wildcats are quite proud of past outcomes as swimmers have continued to improve with each race.

The ranked Golden Gophers are coming off wins against Denver and Brigham Young in a triple dual in Colorado. Purdue lost its last meet by a small margin to No. 9 Indiana.

The Wildcats are 3-7 in dual meets so far this season, with all their wins coming in a single quadruple dual meet against the University of Chicago, University of Illinois at Chicago and Denison in late October. Their record is unlikely to improve this weekend, as even Schroeder acknowledges that both Minnesota and Purdue are objectively stronger teams than the Iowa team that rolled over NU last weekend.

With a young and relatively inexperienced team, Schroeder said he hopes the Cats will learn from a third consecutive meet against significantly faster opponents.

“When you step up on the blocks and you know you’re up against a swimmer who’s faster than you, you can’t give anything to him,” Schroeder said. “Sometimes when the young guys are swimming against faster people they kind of give (the race) to them. You’ve got to go in with a mindset that you can win.”

Although NU has lost both of the last two meets against strong opponents, the team has increasingly found this racing spirit.

Freshman Carter Page has tapped into a winning vein in the distance freestyle events, winning the 500 and 1,000 yard freestyles at each meet since winter break. His classmate Anthony Marcantonio has also found a formula for speed, setting new personal best times in the 200 yard freestyle in both meets this January, achieving times Schroeder said the team hasn’t seen in years.

Schroeder concurred, and noted several other swimmers who have been consistently achieving impressive times. He said that in the past, upperclassmen were swimming at the level that many of the team’s younger swimmers are now achieving.  That should give the Cats a strong base to build the program back up over the next several years.

This weekend will be the Cats final dual meet before the Big Ten Championships next month. That means it is their last chance to earn fast seed times, as well as an opportunity to test their speed midway through the taper.

“We’ve been getting some really good racing in, both in meets and practice,” freshman Will Hofstadter said. “This will be our last opportunity before Big Tens, but I think we’re ready, we’ve had a lot of practice with those race skills.”