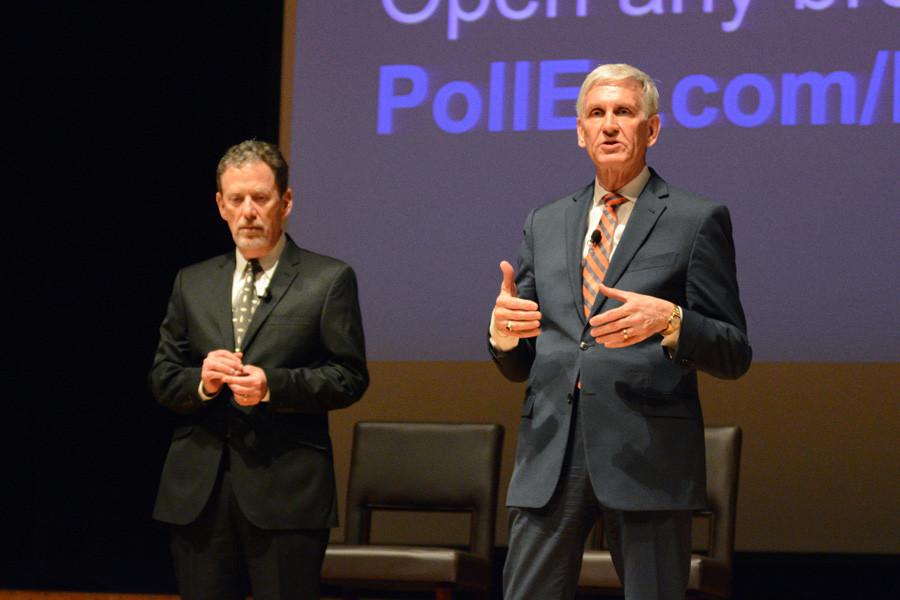 Evanston/Skokie School District 65 Superintendent Paul Goren and District 202 Superintendent Eric Witherspoon speak at their second annual State of the Schools event Thursday night. The superintendents discussed updates to their respective districts since the last address, as well as expectations for the future.

District 65 Superintendent Paul Goren and District 202 Superintendent Eric Witherspoon spent the evening at ETHS discussing their respective programs, goals and challenges, as well as inter-district collaborations and how both districts have grown since last year.

Marcus Campbell, ETHS principal and assistant superintendent, opened the event by emphasizing the schools’ foundation in the community. Both districts have low income enrollment of over 40 percent, and each has a large minority population, reflecting Evanston’s diversity, he said. Campbell also pointed out the number of Evanston residents who attended ETHS themselves.

“There aren’t too many places in this country where more than 16,000 alumni of the city’s only public high school live and work in the city they grew up in,” Campbell said.

Both superintendents discussed their school district’s unique offerings and focused on budgets and financial stability, along with the racial and socioeconomic achievement gaps, as being crucial issues.

Goren said roughly three-quarters of his $124 million operating budget comes from local property taxes, adding that he is concerned about the financial outlook for the coming years.

“Beginning in 2017-2018, District 65 is facing multi-million dollar deficits that must be addressed at the structural level,” Goren said. “We are committed to engaging our community around budget conversations and long-term planning.”

Witherspoon echoed Goren’s financial concerns particularly with regard to the state’s budget crisis, but emphasized that ETHS administration will do what it can to make sure the school’s funding remains as stable as possible.

“We will keep this district financially sound no matter what the state of Illinois throws at us,” Witherspoon said.

Later in the evening, when answering a question from the crowd regarding the state’s financial situation, Witherspoon focused on potential policies that would change the way both districts are funded. He spoke extensively about proposals to equalize education funding throughout the state, which he referred to as a “Robin Hood approach” because it would take money from wealthy areas such as Evanston and give it to poorer areas, such as those in southern Illinois.

Both superintendents said any kind of state-level funding equalization, paired with a freeze on property taxes, would cost their districts millions.

“It is possibly the perfect storm,” Witherspoon said.

Another major theme of the night was testing and achievement gaps. Goren pointed out that although District 65 students test well above the national average, minority students and students of low socioeconomic status are disproportionately represented in the lowest national quartile for standardized testing.

He said although the 2014-2015 school year showed these students improving at the same rate as their peers, the district has named closing the achievement gaps a priority and has implemented programs to address it, including tracking students who test below the 50th percentile and working directly with students in the bottom 25 percent. Witherspoon echoed a commitment to structural change based on research.

“Assessment is not a bad word, but we deal with a lot of mandated things right now, so we’re trying to figure out how to work within that context,” Witherspoon said.

Both districts emphasized their unique programs and opportunities. Enrollment at ETHS is up this year, Witherspoon said. He said out of the school’s 250 courses, 143 are honors options and 29 are Advanced Placement, and the school offers seven nationally recognized certifications.

Goren discussed his district’s efforts to improve the school’s inclusivity. This year, the district opened a “whole child” council, which works to evaluate and improve the schools’ abilities to educate children socially, emotionally and culturally, he said. Another current project is the implementation of “restorative justice practices” over the next few years, such as the utilization of peace circles and sharing circles in the classroom, Goren added.

“Despite our challenges, we have identified opportunities for growth and are looking forward to the exciting work ahead,” Goren said. “Every day there are great things happening in our schools, and we have much to be proud of.”