Women’s Tennis: Wildcats prepare for home opener against No. 14 Duke 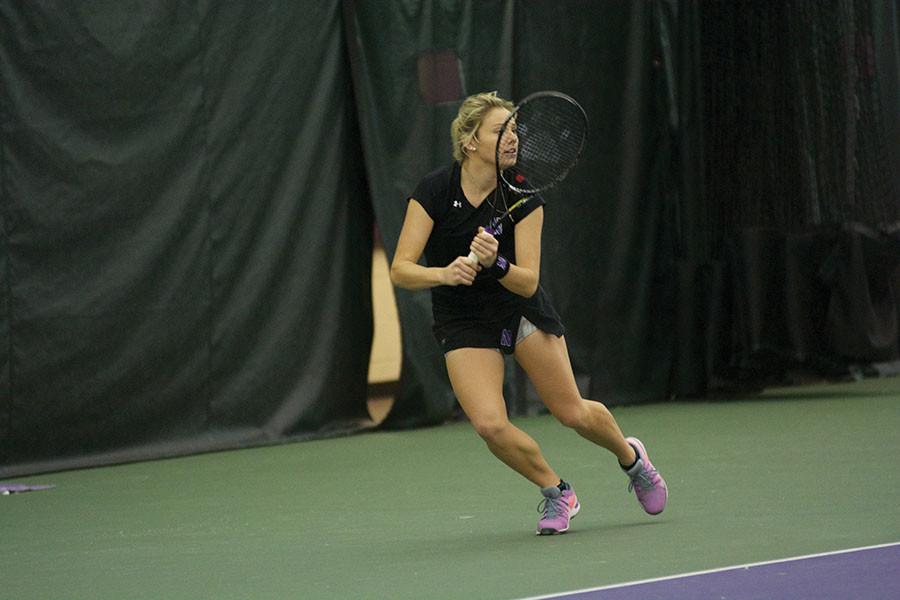 Alex Chatt prepares to return a shot. The sophomore is looking forward to having home-court advantage against Duke this weekend.

After a mixed bag of results last weekend in the Intercollegiate Tennis Association Indoor Championships, Northwestern is hoping to build off its positives as the Wildcats face No. 14 Duke at home Sunday.

Although NU fell to Duke last year 5-2, the team is hoping to use what it has done so far this season to take it to a new level.

For the Cats, doubles will be a primary focus. Last year, NU lost the doubles point to Duke, but the players are looking to turn the tide this season. Sophomores Alex Chatt and Maddie Lipp won 6-2 last Sunday against Oklahoma State’s No. 1 doubles team — also ranked No. 9 in the country — and the rest of the Cats played solid doubles as well throughout the weekend.

Coach Claire Pollard said she was proud of the way NU played on the doubles court last weekend.

“I don’t think there’s anything we need to do differently,” Pollard said. “It’s so short that execution right from the start is so critical.”

Chatt also discussed the perceived strength in doubles on the team.

“Going into Duke, we’re pretty confident in the doubles point in general,” Chatt said. “We’ve all been working really hard outside of our matches to improve our doubles skills and strategy.”

Although the Blue Devils started last season as the No. 2 team in the nation, they had an off year, ending the season at No. 19. However, after having the No. 2 recruiting class in the country, Duke is loaded with young talent.

The Blue Devils are coming off a great weekend in Durham at ITA Championships, but the Cats are looking to stop them in their tracks as they have the home-court advantage this year.

The last time the Cats played Duke in Evanston was 2011, when Duke was ranked No. 6. This was the closest NU has gotten to defeating the Blue Devils in the last five years, going down in a tight 4-3 match.

Alicia Barnett, the lone senior on the team, said the Cats have to match the intensity from the previous weekend going into Sunday.

“(The team needs to) bring the energy that we brought last (weekend), compete really hard, and have some fun,” Barnett said. “We’re just trying to get the best out of ourselves at the moment.”