Men’s Basketball: Wildcats blown out at home against Michigan State 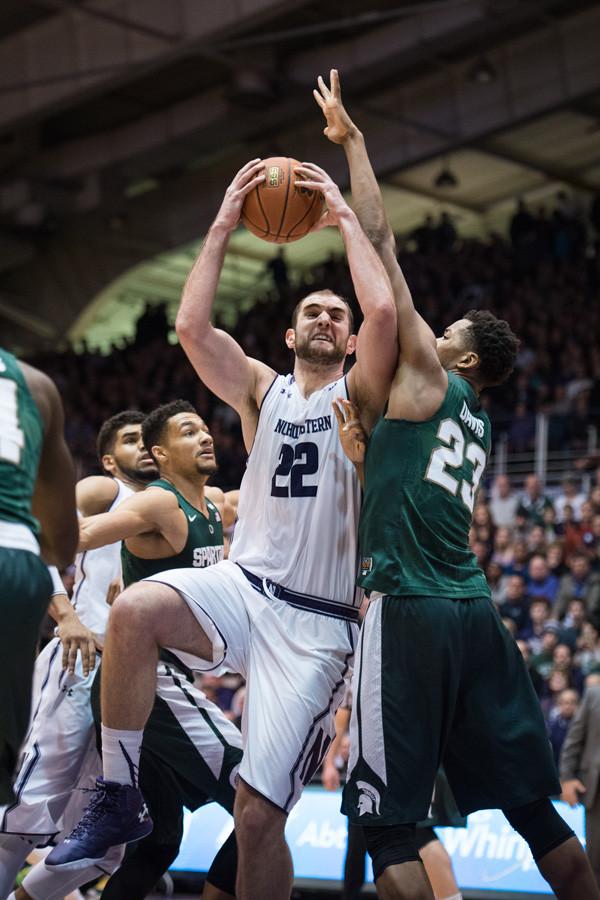 Alex Olah tussles with defenders. The senior was shut down by the Spartans on Thursday, missing all of his shots from the field.

Once again, Northwestern found itself engaged in a perimeter battle in which it simply couldn’t compete.

Northwestern (15-7, 3-6 Big Ten) hosted No. 12 Michigan State (16-4, 5-4) Thursday night, and before the midway point of the first half, the visiting Spartans had claimed the 3-point line as their personal territory. Shooting 8-of-11 through the opening period and 16-of-26 on the night, Michigan State downed NU 76-45, handing the Wildcats their fourth-straight loss.

Denzel Valentine, a John R. Wooden Award nominee, put on a remarkable effort that no Cat could replicate. Sophomore point guard Bryant McIntosh’s team-high 14 points, on a rough 4-of-15 shooting night, weren’t enough to match the Spartan superstar’s 19 points, especially with the rest of NU silent.

“We have to do a better job of running guys off the 3-point line,” junior forward Sanjay Lumpkin said. “Especially when they’re hot like that.”

Just one game after showing signs of life amid a slump, senior guard Tre Demps again failed to emerge as a viable offensive option for the Cats. Scoring just 4 points, his 0-of-7 effort from deep was a microcosm for NU’s overall 4-of-23 output from deep.

Senior center Alex Olah — who coach Chris Collins said is far from healthy and not practicing — similarly struggled on the heels of a 19-point performance against Indiana, his third game back after a foot injury sidelined him for six contests. He ended Thursday night with 4 points, all of which came from the free throw line.

“(Olah) is trying to get what he can,” Collins said. “I thought (Deyonta) Davis’ presence at the rim bothered him… I thought he had a couple of chances where he was right there. I just thought their length and activity really bothered him.”

The rest of the NU roster fell into its usual patterns. Freshman forward Aaron Falzon was inconsistent from deep despite scoring 11. Freshman center Dererk Pardon didn’t fill up the stat sheet but was efficient in his time on the court. And junior forward Sanjay Lumpkin provided a strong defensive effort, albeit one that failed to hamper a streaking Michigan State squad in the slightest.

“I thought our defense was pretty good, initially in the first half,” Collins said. “I think what we could have done better is deny (Valentine) the ball… I thought we allowed him to get it a little too easily.”

And yet, through much of the first half, NU remained close enough that a comeback remained possible, pending a reversal in the teams’ fortunes.

That reversal never came. The Spartans exploded out of the break and extended their lead to 20 with over 12 minutes remaining in the contest. From there, they capitalized off NU’s continuous struggle to find offensive consistency and broke away with the 31-point win.

But while the loss may effectively kill the final lingering hopes of an NCAA Tournament bid, Collins isn’t ready to hang his head and will look to rebound on Sunday against Iowa.

“You can’t let these games put you in a tailspin,” Collins said. “You’ve got to try to stay positive.”

This story was updated with postgame quotes.