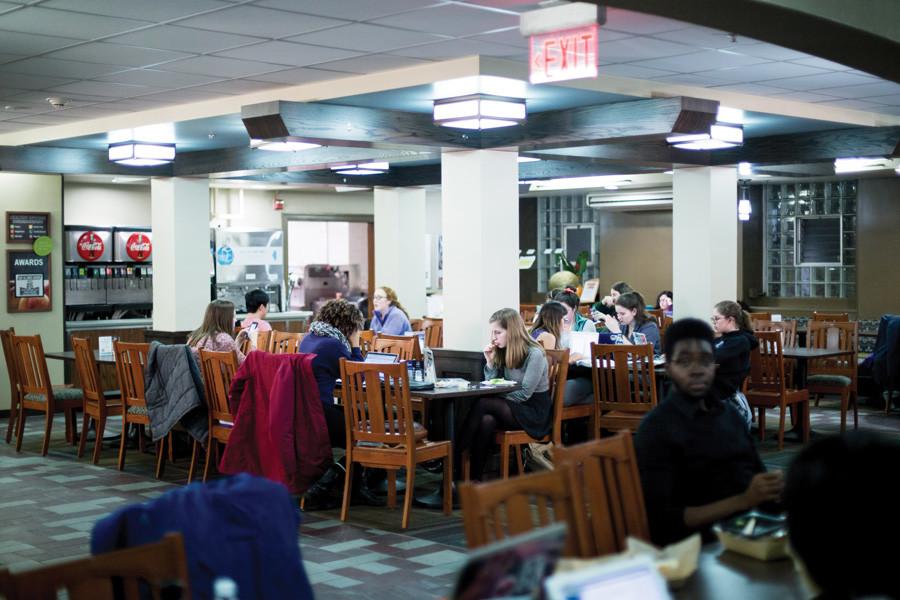 Students eat and work in Fran’s Cafe, a late-night dining spot in Willard Residential College. With Willard scheduled to be renovated next year, a similar eating location will open in 1835 Hinman.

With Willard Residential College closing for renovations next year, a new late-night cafe is set to launch at 1835 Hinman in the fall.

Willard is relocating to 1835 Hinman as part of the Housing Master Plan, and plans for a Fran’s-like late-night cafe are still being decided, but students can expect to find a similar concept at Hinman, said Ken Field, Northwestern’s director of dining.

In a meeting with Field, Brad Zakarin, director of residential academic initiatives, discussed Willard residents’ desire to relocate Fran’s to 1835 Hinman along with the residential college, Zakarin said. However, it is unknown whether the new cafe will be branded as Fran’s, he added.

“The upshot of the conversation was that the expectation is that the same staff, same hours, same food services will be available at 1835 Hinman’s dining hall to ensure the continuity of experience for folks in Willard who decide to stay on for next year,” Zakarin said.

Unrelated to the Willard move, Residential Services will be relocating the Community Service Officer desk at 1835 Hinman to another part of the building, Zakarin said. The move will make the Hinman dining hall and C-Store accessible to non-Hinman residents after dinner hours, he said.

“We’re actually quite excited about the fact that 1835 Hinman’s dining hall will be home to four residential college dining spaces, and that even after hours we’re going to be able to offer this space, as well as services, for students to congregate,” Zarakin said.

Although a space like Fran’s will exist at Hinman, the experience may not necessarily be the same, Field said. Options to incorporate elements of the Willard dining experience in next year’s late-night cafe are being explored.

“We will definitely have the sandwiches, the milkshakes, but where it is in the future, it’s not going to necessarily be the same atmosphere that you get in Willard right now with the fireplace and all the soft seating,” Field said.

Weinberg freshman Dante Gilmer said he goes to Fran’s four to five times a week. He said the establishment of a similar concept in a different location would garner a different crowd and experience.

“The environment would change no matter what, but if we weren’t to have one or some form of substitute that’d be way more disappointing,” Gilmer said.

Although there may be a shift in atmosphere, Field said the changing location may also offer an opportunity for growth. A new kitchen could allow for additional menu items that were limited in the Willard kitchen, he said.

“We intend to improve upon (Fran’s), not cut back or curtail in any way,” Field said.